Anvil and bypass secateurs are two of the most common secateurs designs in the world.

For someone who is new to gardening and not very familiar with secateurs, the anvil and bypass secateurs might look similar but there are fundamental differences.

An anvil secateur is basically good for crushing thick branches and removing dead leaves while the bypass secateur is mostly better for major pruning activities such as trimming and cutting.

Most gardeners use the bypass secateurs as it is more suitable for delicate and simple pruning activities.

In this article, I’ll explain what an anvil and bypass secateur is, their differences and similarities, what is better about each and who should be using either of the two secateurs.

What Is An Anvil Secateur?

The simplest analogy to understand how it works is that of a knife cutting through a vegetable stalk on a chopping board.

An anvil secateur mostly crushes the plant during trimming.

When an anvil blade is in action, the top sharp blade is pinned down against the lower flat metal base.

With this action, the cutter is pressed through the plant and results in the cut.

The blades collide in the same way that a hammer and anvil do, however in the case of the anvil secateur, the blade is sharp.

An anvil blade like I mentioned earlier is not the best for trimming young and fresh plants.

Because it doesn’t work like a scissors, the power crush from the two blades can do damage to the plants as a crushed stem will take longer to heal than a clean cut.

What Is A Bypass Secateur?

A bypass secateur on the other hand works like a pair of scissors with the two blades bypassing each other to make a sharp and clean cut.

Bypass secateurs are the most popular type of secateurs used by gardeners.

One of the blades is the sharp one and does the cutting.

Bypass secateurs are general purpose secateurs and perfect for working on fresh, soft and green material

Because of the scissor-like action gotten from the bypass secateur, it is suitable for almost every pruning and trimming activity.

When dealing with young plants, the bypass secateur gives them a clean cut and doesn’t damage them.

Bypass secateurs should not be used to cut dead wood and thick branches as they could lead to the crushing of the blade.

Here is an article I wrote on what pruning shears does monty don use?

How Are They Different?

Anvil secateurs have a sharp top blade which when in action presses down against the flat bottom base.

It has a pressing action which is best useful when cutting through thick stems and branches.

It is also very good for getting rid of dead overgrowth.

Bypass secateurs on the hand have two blades which pass by each other and give a sharp cut to the material.

It works like a scissors and the one of the blades is usually the sharp one which makes the cut. Bypass secateurs are perfect for working on soft and fresh plant materials.

Anvil secateurs with their crushing power should not be used on young and living plant material as they end up damaging it.

Bypass secateurs on the other hand should also not be used on thick branches as it could damage the secateurs and blunt the blade.

How Are They Similar?

Anvil and bypass secateurs look similar to each other and for those who are not very familiar with gardening tools, they could easily take one for the other.

Both secateur designs also come with a two handed grip which allows the user to hold the handles with both hands while working.

The advantage of an anvil secateurs is its power; because the cut is made at a broad spot, less pressure is needed.

This is ideal for tougher branches, woody stalks, dead wood, and other similar materials.

The blocky design of the anvil secateur ensures that it doesn’t twist when it is faced with resistance such as touch stalks or branches.

Its major advantage is the force with which it meets whatever material that is in it and promptly crushes it.

Bypass secateurs are the best for general purpose pruning especially when working on fresh plants.

The circumvential design which ensures the blades pass by each other leaves a clean cut on your plants.

When sharp and properly used, the bypass secateur would leave your plant in good health and flowering after each trimming.

Bypass secateur are by far the worlds’ most popular designs as most gardening activities fall into general purpose pruning.

The delicate snipping system does not affect the soft tissue of the plants and you can be assured of a clean cut.

This ends up producing an appropriate environment for your plants to blossom healthier and stronger.

Who Should Get Anvil Secateurs And Why?

Trees such as apple and olive trees need to be trimmed after their season of overgrowth.

The anvil secateur is the best option to break through some of the dead branches and get your trees back in shape.

Please note that the anvil secateurs usually require a lot of energy for you to break through the branches.

It works like a crushing action which then helps to break the branch or dead wood into 2.

Who Should Get Bypass Secateurs And Why?

Home gardeners and those who garden for fun are most likely to use the bypass secateurs as it is easy to use and is also general purpose.

The way the secateur is designed gives a clean cut to plant material.

When plant buds are not cut properly such as when you use an anvil or dull blade, it takes longer for it to grow and this might affect the general productivity of such flowering plants.

So if you are a backyard gardener who has a lot of potted houseplants then the best secateur for you is the bypass secateur.

You require less effort to use it and it gives a sharp and clean cut to your trimmings.

Anvil or bypass secateur is one of the oldest questions in gardening activities. Both secateur designs are good as they each have their different uses.

As explained the anvil secateur gives a crushing action which works best on dead wood and tough branches.

On the other hand, the bypass secateur due to its bypass design helps to give your plants a clean and delicate cut.

This supports their regrowth and regeneration.

Bypass secateurs are more popular with gardeners not because anvil designs are bad but because they are more suitable for general purpose.

Before buying a secateurs, ask yourself ‘what am I cutting?

Once you realize that, then you will be able to get the best secateurs suitable to your work out of the two. 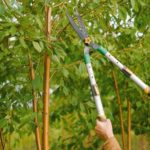