In case you are new to the world of alpacas and you want to learn everything there is to know about them, pay attention to this.

Alpacas are a specie of camelids that originated from South America.

They look a lot like llamas but they are smaller.

They are easily domesticated and when treated with care, they make great pets.

Are alpacas dangerous? Alpacas are not dangerous. They do not have sharp teeth, hooves, claws or horns. They are not known to attack randomly or without cause and they make good protection for smaller animals like poultry and rodents.

When handled with care at a young age, they grow up to be friendly and docile. They might even allow you touch their nose.

Can alpacas be aggressive?

Alpacas are calm and docile creatures but they can be aggressive.

They can get irritated and attack or fight each other.

1. They can get pretty aggressive about breeding rights.

Intact males fight one another on breeding rights over the females.

You can avoid this by making sure they are not housed with the females.

Let them have a totally different paddock that does not give them opportunity to see the girls.

2. They can be aggressive when fighting over food, water and space.

If they perceive that food is in short supply, they will fight one another for rights over it.

A large alpaca can sit near the water trough and hinder anyone from coming near it if the water provided is not enough.

You can avoid this by providing enough food and water for them.

They also get aggressive when fighting over territories.

Alpacas are farm animals and love a large space.

If you put them in a place that isn’t large enough, they can get irritated and fight one another.

They often kick with their hind legs, attacking the source of the threat.

Ensure you approach your alpacas gently and calmly in order not to spook them.

They do not like being threatened and respond aggressively to perceived threats.

4. When a male alpaca has stayed in a paddock for a while, it considers that place its territory.

Bringing another male to stay in the same paddock can cause problems as they will definitely fight over dominance and space rights.

You can avoid this by putting new males in a separate paddock.

Putting old males together with new males can cause aggressiveness.

Yes, alpacas do attack humans but it is rare.

They are calm and cute but do not really like being touched.

While caring for your alpacas, especially the adult ones, you may want to remember that.

Spoilt alpacas or over pampered ones also tend to attack humans because they begin to see humans as their rivals.

They tend to fight each other  over space, breeding rights, food etc. So when they become too friendly or too used with humans, they believe they are the same and see them as rivals.

This can make them attack humans without cause.

You can avoid this by not getting too familiar with baby alpacas. Discipline baby alpaca when it becomes overly friendly or follows you around.

You should also take note of alpacas displaying threatening behaviours and discipline immediately.

Alpacas need to have their teeth and toe nails trimmed regularly.

When doing this, you have to be careful and restrain them gently in order for them not to feel threatened and attack.

There have also been cases where humans got injured while shearing alpacas.

Alpacas need to be sheared at least once a year.

Expert shearers could do this, and you can also learn how to do it.

When shearing them however, make sure you are very careful and keep them restrained in order not to be attacked.

Male alpacas have fighting teeth and often use this when fighting one another for breeding rights or dominance.

It is important that you trim your male alpacas’ fighting teeth regularly in order to minimize injuries.

Male and female alpacas also bite one another when fighting on food and water.

Alpacas can attack and bite when they feel threatened and cornered.

Once in a while also, we get rogue alpacas but this is rare.

Aggressive or rogue alpacas often bite and attack humans without cause.

When all measures have been taken to stop this and yet continues, the alpacas are usually put down.

Why do alpacas spit?

It is quite normal when you see your alpacas spitting.

They do this for a number of reasons which we will be discussing.

✓ Alpacas can enter into a spit dance when fighting on food. When you are feeding alpacas their main diet or treats and they feel it isn’t enough for them all, they often fight each other by spitting. It could be a short spit which is mostly saliva and doesn’t travel far. Dodging this is in your best interest.

✓ When irritated. When alpacas are irritated or threatened, they often spit. Spitting is one of their defense mechanism. When they are corenered and feel threatened they could throw up spit, which can travel up to ten feet. This consists of not just saliva but their stomach contents which is usually mashy green and gross. You don’t want to be the recipient of that spit as it usually has a very bad odour.

✓ When pregnant. Female alpacas often spit at males when they are uninterested or pregnant. This is one efficient way in knowing if your female alpaca is pregnant.

✓ Not well trained. Alpacas that are not well trained often spit at their owners. It is important you discipline such alpacas in order to stop the act.

You should avoid touching or hugging alpacas like you do other pets in order not to be attacked.

They can feel threatened when you do this.

Alpacas are calm and gentle creatures and not dangerous at all.

They could however be aggressive when threatened or not properly trained.

They could also fight over food and water if not adequately provided.

Alpacas attack humans when they are not properly trained and disciplined or when they see humans as rivals.

Male alpacas have fighting teeth and could bite one another when fighting.

They could also bite humans when threatened.

Make sure you trim their teeth regularly.

Female alpacas often spit when pregnant and remember that alpacas do not like to be petted. 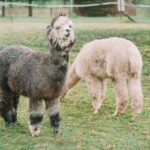 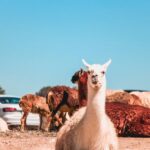