Most people cannot fathom the thought that donkeys can be smart.

Over the many years, derogatory terms have been used to describe donkeys, most of them stating how dumb donkeys are.

There is a general perception that donkeys are very stupid and stubborn animals; some people even call other humans “donkey” as an insult, regarding them as dumb.

Importance of Donkeys being Smart

Our view of an animal affects the way we act towards them.

Donkeys have been around for thousands of years; they have been helping humans all this time.

Some civilizations would not have been able to come about without donkeys; the Egyptians relied heavily on donkeys in the olden days.

They have been around carrying our things all this while, but little respect is shown to them.

This perception of donkeys is false; donkeys have been around and have been companions to many for thousands of years, even before dogs became “man’s best friend.”

Back in the day, donkeys could be called the “poor man’s best friend.”

For the poor man hundreds and thousands of years ago, a donkey was not just their horse; a donkey was also their provider of milk, their company, and their friend.

This was due to how durable, and empathetic donkeys are.

Donkey’s empathy is directly linked to their smartness because empathy is a type of social smartness.

Donkeys have exceptional memory; they also use their memory intelligently.

If we view donkeys as smart beings, we will treat them better.

Related: Here is an article I wrote on best halters for donkeys

Use of Donkeys Smartness

1. Once a donkey passes a route, it does not forget:

This is very useful to humans and owners of donkeys.

Imagine not needing to follow your donkey when you send them on an errand.

Or even the fact that you can send a donkey on an errand and they would remember the route that you want them to take as long as you have taken them through that route before.

In this instance, all you need to do is puts the load on the donkey and smack it to go.

This is also very useful to donkeys as it is essential for their survival; this way donkey knows a dangerous route from a safe one.

They also remember the routes to food, water, and shelter.

In recent times, it has been discovered that donkeys make very good therapy animals.

This is due to their intelligence and empathy.

Empathy is a kind of social intelligence; it helps a person or animal connect to another person or another animal; this way, they can show affection to the other animal or person that is specifically tailored to the needs of that person.

Donkeys possess a lot of empathy, and they show this to their owners; once a donkey bonds with you, it can almost feel what you feel.

This type of intelligence possessed by donkeys makes them great friends and great therapy animals for any type of person.

3. For Bonding with people:

The intelligence of donkeys helps them remember faces and people.

A donkey can remember a person or an animal they saw and bonded with years ago; this is very useful to donkeys and creatures around them.

Donkeys would not be able to bond with people or other animals if they do not have a good memory or if they are not smart.

This is part of the reason a lot of people refer to donkeys as affectionate animals.

Once a donkey bonds with you as aided by its smartness, the bond could be for life.

So when you get a donkey, do not be afraid that it would not remember you or bond with you.

Their smartness also aids them to know and remember how people treat them.

So if you treat your donkey in a bad way, it would remember for years and years to come.

And if you treat your donkey well, it would remember for the longest time, possibly all its life.

A donkey knows how it is treated, it remembers how it has been treated, and it can act according to its history with you.

4. They get along with other animals

If you notice the relationship between your donkey and other animals, you would see that they are closer to animals that are not threatening to them and take time to bond with animals.

This is because they study other animals they are introduced to before proceeding to bond with them.

This is greatly aided by the smartness of donkeys.

Can you imagine training something that would forget everything it is taught almost as soon as it is taught?

This would make teaching extremely difficult.

However, this is not the case with donkeys; because of how intelligent and smart they are.

It is very easy for you to train them; you don’t need to spend years teaching them the same thing.

Beyond being quite easy to train, they also learn, unlearn, and relearn things easily.

This means donkeys can be easily domesticated, taught a lot of things, and be very useful in a lot of ways.

Disadvantages of a Donkeys Smartness

Just like anything in life, whatever has an advantage usually has a disadvantage.

You did not think donkeys being smart would be all good, did you?

In this section, we are going to explore some of the disadvantages of donkeys being smart and how the exhibition of their smartness sometimes can be interpreted as them being stubborn.

Some of these disadvantages include:

Because of how intelligent donkeys are, they usually recall traumatic experiences.

This can make your donkey very distant and seem not empathic.

This is one of the downsides of a donkey having a very great memory and being smart.

This can plague your donkey throughout its life; while some other animals would easily forget trauma, donkeys do not.

Donkeys can seem stubborn and hard to train, so you would naturally interpret it as donkeys being dumb and incapable of been trained.

This might not be the case, as donkeys are very intuitive; they can assess situations and object to things that might be detrimental to them.

You might be assuming that your donkey is dumb, unruly, and incapable of being trained, but in fact, your donkey might just be expressing self-preservative behavior from its memories.

You might be finding it hard to bond with your new donkey, especially when you bought the donkey as an adult.

This might be because your donkey still feels bonded to its previous owner and therefore finds it hard to bond with you.

All you need to do is give it some time and treat it well; as you do this, it will eventually bond with you.

Are some donkeys smarter than others?

Just like humans and other animals, some donkeys are smarter than other donkeys.

Just like some humans have higher IQs than others, that’s how some donkeys are smarter than others.

At the end of this article, you should be able to know that donkeys are smart creatures, and they are the smartest of the equine species. 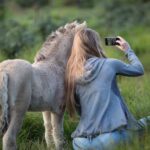