If you have ever wondered if ducks are smart birds, and if they have a higher intelligence level than other animals, then you should read this article to the end.

Cos the other day I was watching a show and I saw how organized a flock of ducks behaved while interacting with each other.

Are ducks smart? Ducks are very smart birds and their level of intelligence is as high as other animals. They have a unique form of communication that expresses how they feel at all times. Also when it comes to showing emotions especially with their “birth” parents, they are simply awesome. A duck will stick with the parent they first see after being hatched and will display a high level of emotion to that animal for it’s full lifespan.

Ducks are very smart birds and if you read the rest of this article, I will show you some other things I discovered that makes them very smart animals

Are ducks more intelligent than chickens?

Now as someone who has both chickens and ducks in my farms, I can tell you that this one question keeps coming up a lot

Here are some of the benefits of ducks over chickens

Can Ducks Learn Their names? Do Ducks Recognize their Owners?

Yes , ducks have an impressive memory and can learn and remember their names.

Now I know this might come as a surprise but ducks are actually quite trainable.

Usually with the right motivation and a lot of patience, you can teach a duck to respond to calling its name.

One thing I noticed is key, just like with other animals is to get them used to certain conditioning techniques little by little until they adapt and get used to it.

So for example, say you give them a little treat whenever they respond positively to their names being called.

Over time you will find out that whenever you call it’s name, it responds only to get the reward that it hopes to get.

Are Ducks Smarter Than Dogs?

Ah… here is a little competition between ducks and man’s favourite pet, dogs

Are ducks smarter than dogs?

I am sorry to all the dog lovers out there, but the answer is yes and there are facts to prove it

Ducks are very smart animals and research has shown that they can be taught how to play games and puzzles.

Also ducks are amazing mothers and very caring that take care of their young ones very well.

It has been shown that ducks will “sing” and “purr” to their eggs before they hatch.

When the chicks hatch, the ducks are more caring and display care and affection to their young one.

They defend them from predators, show empathy and teach them everything that they need to know to survive.

Things like what to eat and what to avoid, how to defend themselves and social hierarchy and pecking order are all passed down from mum to kids as they grow.

Also ducks are very brilliant right from the beginning.

This can be known through something called object permanence.

This simply means the ability to recognize objects even when they cannot see it.

Ducks develop this ability as early as 2 days old while it takes dogs as long as six months to learn this skill.

Research has shown that ducks are making scientists rethink everything they ever thought they knew as regards ducks and abstract intelligence.

To put this plainly, abstract intelligence means the capacity to understand and manage ideas and symbols.

It is known that in humans, this abstract intelligence is responsible for things such as creative problem solving, humour and inventions

So to answer the questions put forward earlier, yes ducks can think

At first it was thought that thinking and abstract thinking was only possible in animals such as apes, dolphins and crows

And then this study in 2016, came along and showed that ducks are actually able to think and carry out complex problems solutions.

In the study it was found out that as soon as ducks hatch they display signs of high level abstract thinking.

To explore and understand how ducks think, they were exposed to a variety of objects showing them different pairs in shape and color.

Later when they were shown completely different objects, 60 percent of the ducks got up and followed the pair that had the same similarities with the pair they had seen originally

If you really want to learn more about this unique ability of ducks, I highly suggest you read the study I talked about.

Now out in the wild, there are lots of animals that will like to make a meal of ducks

Ever wondered how ducks stay ahead of their predators?

Ducks have the unique ability to get a good shut eye while still keeping a lookout for potential dangerous animals.

Can you imagine that?

So when a flock of ducks are together, this means that each duck can take half brain naps while keeping one eye out for trouble

Researches who made this study, noted that half napping ducks that are positioned on the outside of a group will close one eye and keep the other open for danger, while those in the middle will close both eyes and go to sleep.

Talk about synchronized sleeping and also keeping each other safe.

This is one of the reasons while I say ducks are extremely intelligent and smart birds.

Ducks also have the incredible ability to hear sounds and music even though they do not have outer ears like most mammals do.

Here is how it happens. According to research carried out by Germans, ducks can easily localize sounds by using their entire heads like giant outer ears.

While carrying out the study, they noticed sounds hitting the eardrums of ducks at different angles and at different frequencies.

This shows that ducks actually can listen to music and also like the music that is being played.

Ducks are very smart animals that have the ability to think, like music, show emotions and are also smarter than most animals.

Studying ducks, you will realize that they are not only cute birds but they also have the brains to go along with it. 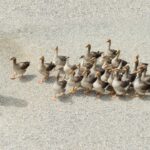 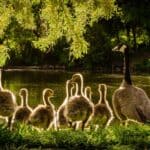