Birds are adorable creatures. Who wouldn’t be captivated by the sight of these cuties?

Although, it’s no new thing that most birds can be aggressive. However, oftentimes, it could be for a good purpose.

Most birds become aggressive to defend or secure their territory. Some birds get into fights over food.

Even more bizarre, some of these adorable creatures have been discovered to attack humans.

How about hummingbirds? Are these tiny birds aggressive as well? Let’s find out.

Hummingbirds are a very territorial species of bird. They are typically aggressive for a variety of reasons.

For the females, it could be due to securing food, certain hormones, or seasons of the year.

Generally, female birds are aggressive during their nesting period. Hummingbird females are also protective of their nest and young.

However, there are times of the year when they become more aggressive.

Their aggressive behavior is usually at its peak in late spring or early summer.

This article contains exciting facts about hummingbirds’ behavior. This will undoubtedly be an enjoyable read. So, keep reading.

What Does It Mean For A Bird To Be Aggressive?

A lot of birds show signs of aggression. These aggressive signs mean something. It could be a way of conveying a message.

These aggressive behaviors could be a result of

1. Fear: This is one of the most common causes of aggression in birds. When birds are aggressive it could be that they are afraid or they feel threatened.

This can cause them to attack, bite and even harm other birds.

In the case of humans, this could be because they aren’t used to them. And so, these birds can get frightening when humans attempt to touch them.

2. Lack of socializing: Even dogs that aren’t socialized tend to be aggressive. This is the same with birds.

If they aren’t properly socialized, they are likely to be aggressive to humans and even their fellow birds.

3. Seasons: Most birds are usually aggressive during certain seasons. The majority of them tend to be territorial during breeding and nesting seasons. This could make them aggressive.

Protecting their claimed territory, such as the birdcage or feeder and even their young one can lead to aggression.

If your pet bird bites you when you try to handle it, you must set aside time each day to work on handling them.

For instance, you might need to work on bonding with your bird or train it to enjoy petting.

You can even teach it how to do fun bird tricks.

The point is that the more you work with your bird, the more it will enjoy your company, and the less aggressive it will act.

Are Hummingbirds Aggressive Towards Humans?

In a confrontational situation, if a hummingbird feels threatened in any way, it is more likely to flee than fight.

However, Even if they do confront humans, they are tiny birds and can cause very little harm.

Flying away when a serious threat arises is a fact that these birds are very conscious of.

They will simply flyway when there is a threat.

Related: Here is an article I wrote on feeding hummingbirds with sugar water

Do Hummingbirds Interact With Humans?

Yes, hummingbirds communicate with humans. Unlike some other birds, they have been observed to recognize humans.

When they want food, they usually fly in your face. Hummingbirds become acquainted with you when you provide them with food regularly.

They can tell the difference between a threatening predator and someone who regularly provides them with food.

Feeding these birds regularly makes them more accustomed to you. You can do this by placing a hummingbirds’ feeder in your backyard.

It’s also important to be present whenever they are feeding.

Interestingly, these birds can distinguish between individuals through visual and auditory cues.

As a result, the hummingbirds are familiar with your voice, repeated actions, and routine.

Instead of being on high alert, they will feel at ease in your presence.

You can even hold the feeders and let these cuties eat off your hands.

However, hummingbirds will be comfortable doing this when they become accustomed to you.

You’d know this when they do not flee from your presence anymore.

Hummingbirds are fascinating birds. They become more interesting as they grow fond of you.

To be successful, every relationship requires consistency. The same is true for hummingbirds.

It is important to be consistent with the time you’re at the feeder.

Your sitting or standing position as well as what you wear matters as well. These birds are naturally attracted to floral print or red color.

Keeping your conduct consistent daily can help them become accustomed to you faster.

However, it may take several days or weeks for them to feel at ease with you.

How Do You Keep Hummingbirds From Fighting?

Hummingbirds can be dangerous to each other sometimes.

This becomes extremely territorial and aggressive in an attempt to protect and boast of their food supply for their mate.

This aggressive behavior is more common with male hummingbirds.

However, if you notice hummingbirds fighting each other, there is a way to help them out.

Certain steps can be taken to reduce their level of aggression. To lower the chances of your hummingbirds fighting, it is best to have multiple feeders.

The birds might likely be fighting because if they are congested in one feeder. Ensure the feeders are properly spaced as well.

This ensures your birds have enough room for themselves. Reducing physical contact reduces their tendency to fight.

Not having enough space backyards will cause competition and territories that will be threatened.

Feeders that are farther apart reduce the physical challenge of the bullying hummingbird to protect their newfound terrain.

While they are zipping from feeder to feeder and expending energy at a rapid rate this allows the less aggressive hummingbirds the ability to eat quietly.

This, in turn, will lower the aggression of the more confrontational birds.

Do Hummingbirds Hurt Each Other When They Fight?

Yes, hummingbirds are most likely to hurt themselves when they fight.

Hummingbirds would usually fight to prove their dominance over other birds or to win the affection of a potential mate.

They have pointed sharp beaks which they can use peak each other and cause serious harm to themselves.

Fighting however is usually the last option for these birds.

Before opting for a fight, they may have exhausted other options like making aggressive noises or chasing which the intruder did not heed to.

Do Hummingbirds Kill Each Other

Yes, hummingbirds might kill each other during a fight. As earlier stated they have sharp beaks. They use their beaks as weapons when fighting.

This causes them to injure themselves and in the worst cases kill each other.

Can You Tame A Hummingbird?

Yes, Hummingbirds can be tamed. Taming is simply a means of making them behave better.

They can be trained to stop certain bad behaves and learn new ones. These birds are really cute and unique.

And these may make you want to keep them as pets. However, it is impossible to keep these birds as pets.

Most birds will require confinement as part of the taming process, but hummingbirds are better off set free.

Hummingbirds cannot survive in confined spaces, which is why they are only found in zoos.

They eat insects and nectar that most people do not have access to. So you need to obtain permission to keep hummingbirds.

If you are caught keeping a hummingbird, it is against the law. and that will most likely attract a fine.

They are mostly purchased by the government and housed in zoos.

As stated earlier, male hummingbirds are much more aggressive than females. They need to be aggressive to attract females and to defend their territory.

However female birds have been noted to be more aggressive when it comes to their nest and food as well.

Aside from that, male hummingbirds are notably more aggressive.

Yes, female hummingbirds fight. Hummingbirds in general fight regardless of their gender.

However, the female hummingbirds are likely more aggressive during their nesting period.

This is common amongst female birds naturally. They are always ready to protect their young, even if it means getting into a fight.

They also get aggressive when securing their food. This can also lead to a fight amongst them.

Hummingbirds are tiny yet very energetic birds. They can be very aggressive even to their kind.

These birds do not like sharing their space or food as well.

Hence, they can get aggressive when they do not have enough room for themselves.

They would fight with their fellow hummingbirds if they keep getting in their way. 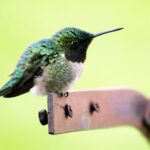 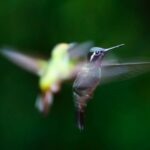