Pollination is one of the more important activities for crop production.

Without pollination, humans would miss out on some great foods as fruits would not be able to grow.

Hummingbirds are one of the world’s largest pollinators as after feeding they transfer pollen from flower to flower and encourage reproduction.

Hummingbirds are also good pollinators as they are able to get to flowers with difficult access due to their long tapered bills.

Today we will discuss pollination and the role of hummingbirds, what plants they pollinate and what makes them great pollinators.

Pollinators are animals that help spread pollen from one flower to the other.

The pollen is carried from the stamen which is the male part of the flower to the stigma which is the female part.

Pollination is very necessary for the fertilization of plants and for fruit and seed production and the growth of young plants.

Pollination can occur through wind and water, self pollination by the plant and by animals such as insects like bees and wasps, birds and small mammals.

When the pollinators visit the flowers, the pollen sticks to their bodies and in this way, pollen is transferred from one flower to another.

Hummingbirds are one of the best pollinators of flowers. They frequent nectar producing flowers regularly to feed and refill their energy.

Due to their body systems they use up a lot of energy and their main food sources are nectar from flowers and all insects.

They are important in plant pollination as a hummingbird can eat five to eight times in one hour and visit 1,000 to 3,000 flowers per day.

Hummingbirds are known for their long bills which makes them have a preference for tubular shaped flowers with opened up blossoms.

When they feed from flowers, pollen from the stamen is stuck to their bills and forehead and as they go from flower to flower pollination occurs.

Research has discovered that a lot of flowers have evolved to be more attractive to hummingbirds so they can help the process of pollination.

Some characteristics which have evolved include; having brighter colors, evolving into a more tubular shape, having a higher nectar content and blooming during the day time as hummingbirds are diurnal birds.

Related: Here is an article I wrote on hummingbirds being good luck

Why Are Hummingbirds Important To The Ecosystem?

One reason why hummingbirds are important to the ecosystem is that they are able to pollinate flowers that are difficult to reach for other birds or  animals.

The flowers pollinated by the species are usually found in cloudy forests and rainforest environments.

Due to their location major pollinators like bees and other insects would not readily be available in that area.

As such hummingbirds help to keep those flowers in perpetuity.

Hummingbirds are also very energetic birds that drink quite a large amount of nectar per day and each species of hummingbird has their specialised flowers i.e. they would only visit those flowers to feed.

During migration, hummingbirds depend on those flowers for nectar and the flowers also rely on the birds for pollination.

If the habitats along the hummingbirds migration routes are destroyed, it could lead to a decline in the hummingbird population and in turn the flowers which depend on them..

Are Hummingbirds Good For The Garden?

Hummingbirds are quite important for gardens as they are major pollinators. Hummingbirds will not only flowers, they will also visit your vegetable plants so they can flourish.

Strategically planting pollinator flowers with your vegetable garden will benefit both the hummingbird and you as you will get a considerably rich harvest.

Hummingbirds will also help reduce the incidence of insect pests in your garden.

They will eat up small insects that might be affecting your vegetables and also add beauty with their magnificent colors to your garden.

To attract these beautiful birds to your garden, ensure you plant hummingbird friendly flowers in your garden.

Choose plants that bloom during the day and also have tubular petals so the hummingbirds can feed from them.

Such flowers can include columbines, petunias, salvias, foxgloves, hollyhocks and many other similar flowers.

Are Hummingbirds Better Pollinators Than Bees?

Bees are one of the world’s largest pollinators as they can pollinate thousands of flowers a day while they are foraging for food.

The little insects can each visit up to fifty flowers while collecting nectar and pollen.

The pollen then spreads to other flowers as they move from one flower to another.

Both hummingbirds birds and bees are great pollinators and contribute to building the ecosystem.

Hummingbirds are able to pollinate flowers that bees even the large ones might not be able to get to.

Those flowers have deep and narrow cannulas which only the long slim beaks can get to.

Hummingbirds and bees both pollinate different kinds of flowers. Bees as we all know are very much attracted to yellow and have an aversion for red or darker colors.

The sword billed hummingbird is the only bird in the world with a bill longer than the length of its body.

This bird feeds on flowers which have very deep chambers and short billed birds cannot get to.

With its specially equipped body, the hummingbird is able to pollinate difficult flowers.

Hummingbirds and bees typically do not frequent the same kind of flowers and plants.

One of the reasons for this is the fact that hummingbirds are attracted to flowers that have a high nectar content.

For a hummingbird to see a flower as a rich source of nectar, then it would have a nectar content of about 19- 21%.

Bees on the other hand frequents flowers that give out a low level of concentrated nectar.

This means flowers serving the bees cannot satisfy a hummingbird as they prefer larger amounts of nectar even if it is diluted.

Also, hummingbirds visit flowers that make it easy for them to feed easily.

These kinds of flowers usually have long tubular blossoms which will help the hummingbird feed comfortably with its long bill.

A bees proboscis is not as long as that of a hummingbird and thus they will favor flowers with shorter petals that they can easily feed from.

A research at the Worcester Polytechnic institute revealed that bees do not spend time on flowers with colors such as red and the hummingbirds then come in to feed.

In essence these birds feed where bees don’t bother to forage and you could say hummingbird flowers are anti-bee.

What Plants Are Pollinated By Hummingbirds?

Plants pollinated by hummingbirds have specific characteristics which attracts the birds and they include:

Also, the pollen produced from these plants are higher as the birds spend short periods only on each flower. The pollen falls off the bird as it moves.

Hummingbird flowers include bee balms, foxgloves, hollyhocks, columbines and many much more.

Hummingbirds do not pollinate tomato plants as they do not have the characteristics of hummingbird flowers.

Tomato flowers are pollinated by bees with a special kind of pollination known as buzz pollination.

Bumblebees and mudbees are the only bee species which pollinate tomato plants as they exhibit the buzz pollination behavior.

Honeybees do not pollinate tomato plants as they cannot exhibit that behavior.

When the bumble or mud bee lands on the flower, it vibrates it’s wing muscles and this produces an audible buzzing sound.

The buzzing dislodges the pollen from the stamen and can either land on the flowers’ stamina which results in self pollination or stick to the bee which then carries it to another flower for cross pollination.

Although tomatoes can be wind pollinated, the ones pollinated by bees are usually higher in Vitamin C.

Pollination is the process of spreading pollen from the stamen to the stamina and this helps plant and crop reproduction.

Hummingbirds are great plant pollinators. They frequently visit flowers for nectar as they use up a lot of energy in their daily activities.

Hummingbirds can pollinate flowers that are more difficult for other birds or even bees because of their long slender bills.

Hummingbird flowers usually have long tubular shapes and an abundance of nectar.

These beautiful creatures are a great addition to every garden and you should try attracting the to yours by planting hummingbird friendly flowers. 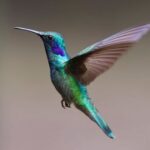