Hummingbirds are popular for being fiercely territorial. Backyard bird watchers have reported a lot of fights breaking out among hummingbirds when they are feeding.

Naturally, hummingbirds have to fight other hummingbirds for flowers that have nectar and they do not even know the difference when they are eating from feeders.

A lot of people who keep feeders have reported male hummingbirds chasing others from a particular feeder once they claim it as their territory.

This article will discuss whether hummingbirds are territorial, how they mark their territory, how to stop them from fighting over feeders among others.

What Does It Mean For Birds To Be Territorial?

Birds have been observed to be territorial i.e they tend to have defended areas which they require for activities such as feeding, mating and sleeping.

These territories are usually protected by the males though in some birds like eagles the females can also be protective.

This explains why they are more aggressive than the females. They often establish these territories before the onset of the mating season.

Birds claim their territories with activities such as singing, nesting, virtual displays like dancing and chasing out intruders from established territories.

All species of hummingbirds are reputed to be ferociously territorial.

Once it’s spring, the male hummingbirds arrive at the breeding grounds and establish their territories.

They would defend it from any intruder whether male or female. A female is only allowed free passage after she mates with the male and can lay her eggs in his territory.

This behavior is also exhibited at hummingbird feeders as one bird can dominate the feeder for hours or days and this most often stumps humans who put out the feeders.

Related: Here is an article I wrote on are hummingbirds attracted to red

How Do Hummingbirds Mark Their Territory?

Hummingbirds mark their territory as they have established areas for mating and feeding.

Hummingbirds are almost antisocial in nature as they are almost never together with members of their own species.

Both males and females have defined territories and a male hummingbird can defend a territory up to a quarter of an acre in size.

Females will also mark their territories by the nests they build and both sexes will defend these territories from intruders.

Male hummingbird will exhibit behaviors such as:

Are Hummingbirds Territorial Towards Humans?

As much as hummingbirds are territorial and aggressive towards birds of their species, they do not exhibit such behavior to humans.

Hummingbirds are curious and inquisitive creatures and can be seen flying up to a human’s face.

This is not a sign of territoriality or aggression, it is rather mere curiosity as the hummingbird is coming to investigate your face.

Hummingbirds are even known to be friendly towards humans especially if you put out feeders for them and have gained their trust.

The only reason a hummingbird might act aggressively towards a person is if you come too close to their nest or you walk in on a mating session.

They usually save the aggression for their mates.

Do Hummingbirds Hurt Each Other When They Fight?

Hummingbirds engage in chases and fights as a way of defending their territory from intruding birds.

They will use their bills and claws to try and grab at each other and they can easily get hurt during these engagements.

Hummingbirds are close to being antisocial in nature and would fight males, females and even birds of other species when it comes to defending their territories.

The defending bird usually starts out by making aggressive noises at the intruders or puffing out his chest.

It can quickly escalate to fisticuffs however and this can cause serious injury or even be fatal for one of the birds.

Research has shown that some hummingbird species have sharp or stiletto-like beaks which can impale the other bird and result in death.

Also check out this article I wrote on are hummingbirds pollinators

How Do You Stop Hummingbirds From Fighting Over Feeders?

Hummingbirds fighting over feeders is an annoyance for the humans who set them out as most times the feeder can be dominated by just one bird for hours at a time.

However there are ways you can reduce the incidence of fighting and territoriality at the feeders.

Having just one feeder for several hummingbirds to feed at will only increase aggression and fights at the feeder.

It is much better to have multiple small feeders at different locations than one large feeder.

This might work with other species but for the hummingbird this means the feeder will most likely be colonized by the strongest and most dominant bird in the area.

Spacing out the feeders makes it difficult for the territorial and dominant hummingbird to successfully guard all of them.

This means he will have to stick to one feeder and allow the others to eat in peace.

Also, by spacing out the feeders in a way that the birds are not able to see them, there will be peace at the feeder stands as they won’t get in the way of each other.

Distribute the feeders all over your garden or apiary so various hummingbirds can get to eat in their favorite places.

If you place one feeder at the front and another at the backyard, two hummingbirds can feed in peace without even knowing they exist.

How Far Apart Should Hummingbird Feeders Be?

Hummingbird feeders should be placed at least 10 feet apart from each other to reduce aggression and fighting among the birds.

If you have been having issues with hummingbirds fighting at the feeding stations you would have to hang more than one hummingbird feeder and then space them out.

It is important for the feeders to be well separated so the dominant bird does not take over all the feeders.

It is even better when you space the feeders and hang them in such a way that they are out of sight of each other so all the hummingbirds can feed quietly without fighting.

Do Hummingbirds Fight To The Death?

Hummingbirds might be small and beautiful but they possess a fierce streak and when it comes to defending their territory, they will stop at nothing to hold on to it.

Hummingbirds are also great food lovers and will fight aggressively to defend their food source.

A hummingbird fight can be very scary to watch but they can fight to death.

Hummingbirds love nectar and during the food droughts when flowers are drying up they would rather die than leave their favorite food source.

Although death is not the planned outcome of the fight, in some cases it could result in accidental death.

How To Get Rid Of A Bully Hummingbird

A bully hummingbird would usually dominate the feeder and would not allow other birds to feed from the feeder.

It can be a nuisance to deal with as a backyard bird feeder as this defeats the purpose of putting out feeders.

These male birds will take sole control of the feeder and would exhibit aggressive behaviors such as repeatedly chasing other birds, smacking and engaging in fights with them.

The best way to stop the activities of a bully hummingbird is to provide more feeders and place them out of sight of the bully.

This way the other hummingbirds can feed in peace. Some experts are also of the opinion that the feeders should be increased but should be placed close by.

The bully bird will be overwhelmed with guarding different feeders and might end up choosing one.

Hummingbirds might look like sweet delicate balls of fur to humans however they are seriously aggressive and territorial in nature.

Hummingbirds will defend territories including food courses fiercely from other birds of their species.

This can cause a problem for people who put out feeders as one bird can decide to dominate them.

The best way to reduce fights at the feeders is to increase the number of feeders and place the strategically around your yard. 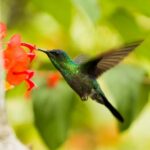 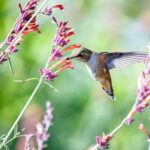