Ostriches have a lot going for them. Being smart isn’t one of them.

These birds are the largest flightless living ratites and can run as fast as 70 Kilometers per hour when fleeing from predators such as lions, cheetahs and leopards.

But going through literature about them or observing them first-hand will reveal that these birds with eyes measuring more than four times the size of the average human eyes are not smart.

But why have Ostriches gained such a reputation? And is there some truth to it? Stay with us, we have all the answers.

The majority would answer in the negative and opine that ostriches are not smart by any stretch of the imagination- and they would have understandable reasons for coming to that conclusion too.

Also, when threatened, ostriches sometimes bury their heads in the sand.

Mind you, this is an animal that has eyes capable of a predator the size of a normal-sized dog three and a half Kilometers away and speeds up to at least forty kilometers per hour on a bad day!

Also, it is not smart to eat almost anything- which is something that ostriches do. What we ingest could determine whether we live or die.

Most organisms know this and you would assume that a bird the size of an ostrich would too. But apparently not.

Why Are Ostriches Referred To As Dumb Birds?

Ostriches are referred to as dumb birds for several reasons as outlined before. Let’s consider a few of these.

1. The size of an Ostrich’s brain

The size of an organism’s brain is usually associated with how smart or intelligent it is.

Ostriches have brains as small as a walnut.

It has been stated that you would need a telescope to view the brain of an ostrich as opposed to its other features like its enormous eyes.

It has been observed that ostriches sometimes bury their heads in the sand when they sense dangers from predators.

Perhaps, believing that as long as they cannot see the predator, they can’t be seen by the predator.

In fact, the saying about a person “burying their heads under the sand” in an effort to pretend as though refusing to tackle a problem will make it disappear is coined from this practice by the ostrich.

3. They would eat almost anything

Admittedly, ostriches have been rumored to have diamonds in their stomach.

They have also been said to eat metal.

Most of these rumors’ are myths not helped by the ostrich’s insistence on eating or swallowing almost everything that comes its way.

While it needs the stones and pebbles it swallows to help grind the food that it ingests, like a toddler that doesn’t know better, the ostrich would eat almost anything, hence, earning them the reputation as dumb birds.

But in their defense, ostriches do not really need to be smart, or better put, as nature has shown even as dumb as they are, they have survived in the wild.

Nature has equipped them with enough for them to make it by.

For example, they have one of the best eyesight in the animal kingdom which helps them stay alive as they can spot predators from a distance and easily outrun them.

Also, the bad press that these animals get for “burying their heads under the sand” is probably underserved because most times, it’s just a female ostrich checking on her eggs that are buried under the sand.

And speaking of eggs, for a bird maligned for being dumb, the ostrich is one of the few birds that can distinguish its own eggs from that of others.

How Big Is An Ostrich Brain?

An ostrich’s brain is about 0.015% of its total body weight.

To put this is contest, the ostrich’s brain is seventeen times lighter than that of the domestic fowl.

As to actual size, an ostrich’s brain has an average weight of 26.34 grams.

A length of 59.26 millimeters and a width of about 42.30 millimeters. To put this in context, the ostrich brain is the size of a walnut.

Can Ostriches Be Friendly?

Yes, ostriches can be “friendly enough” in the circumstance that you raised them from infancy.

But even at that, they remain wild animals. This entails that they easily revert to their primal disposition.

So if at any time, being the territorial animals that they are, perceive you as a threat, or choose to display their territorial nature, they have the artillery to do you grave harm or damage.

And yearly, there have been reports of ostriches killing humans who got too close.

To put into clear context just how dangerous these animals can be, do a quick search of them and observe their powerful legs and the sharp daggerlike 4 inch claws which can kill a lion.

Yes, these prehistoric animals are beautiful but not all beauty is to be admired or enjoyed in close proximity.

Even though the Ostrich, beautiful as it is, would not attack you unprovoked if you didn’t go near its eggs, hatchling or seem a threat, it can disembowel you with a kick.

So, it’s worth asking whether your desire for “friendship” with an ostrich is worth the risk. And there’s no question of outrunning them. They are at least twice faster than the fastest man.

Can Ostriches Be Trained?

Yes, Ostriches can be trained.

Ostriches have been domesticated and farmed for a long time for the sport of racing.

It is very common practice in some countries for people to ride ostriches the same way that they do horses but with specialized saddles and contest against each other in a race.

This practice is a part of the culture of South Africans and represents a tourist attraction in the United States of America, particularly in the State of Florida where since 1892, Ostrich racing has been a thing of interest.

Apart from Florida, California, Nevada, and a host of other States race Ostriches.

Do Ostriches Have Good Memory?

Ostriches do not have good memories.

They have been said to have a memory span of 10 seconds.

This should come as no surprise given the small size of their brains.

This means that theoretically speaking, if you incur the wrath of an ostrich and can keep alive for 10 seconds, the ostrich would forget why it was after you.

In a world of very smart and intelligent creatures, ostriches show us that even without that which we prize as intrinsic to our existence (intelligence), life goes on.

Surrounded by predators ready to pounce at every moment, these flightless birds live simple lives – feeding, running, mating. They seem to teach us that sometimes, less is better. 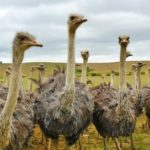 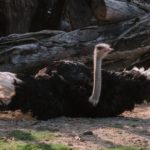