Birds are known for their creativity, in term of building nests.

They don’t only make nests in trees, they can make nest in the ground  by digging holes, or even in the woods too.

Speaking about making nests in trees, do you know that there are some bird species out there, gifted with the art of making hanging nests, either pensile or pendulous?

In this article, I will identify ten birds that build hanging nests and how they were able to perform that wonder.

A North American bird specie, the Oriole is gifted with the art of making hanging nests. They are often found in coniferous forests, riverine forests, large gardens and orchards.

Shaped like a bowl and suspended high in the air, the Oriole nest stand out from every other bird nest in the North America.

In order to make these nests, they source for materials like twigs, woven grasses, sedges, feathers and reeds, fur, down wool, moss and a list of others to build an impressive pensile nest.

The female Oriole is the main craft person. She builds the nest while the male Oriole source for the materials for her.

A subspecies of small passerine birds, the America Bushtit, simply referred to as Bushtit can be found in the Western United States and Mexican sides of North America.

They live in flower gardens, city parks and open woodlands.

The nest building process often last a month, but the end result would leave you wowing.

Fan-Tailed Warblers live along the Pacific slope from Northern Mexico to Nicaragua. They are well known for their pensile nests, often looking like dome shaped nests.

They build these nests from grasses, fiber, plant stems, fiber and other materials to make their home comfortable.

According to ResearchGate, these cognitive species of birds, build their nests between May, June and early July. They usually start making nests at the age of 3 to 5 months.

Related: Here is an article I wrote on birds that give farmers trouble

The Montezuma Oropendola’s nest is so impressive and baffling.

At a far distance, the nests strike a great resemblance to low hanging fruits, considering the organization and structure.

In a colony, these birds make about 30 woven sack nests, made from vines and fibers.

These hanging nests are 24 to 71 inches long, and they hang up to 30 meters high from tree branches.

Just like the name, the Penduline Tits are known for constructing elaborate pear shaped nests, from spider web, wool, animal hair, and soft plant materials to give them a comfortable nestling home.

The Goldcrest is one of the smallest warblers breeding in Europe, and they belong to the kinglet family.

Goldcrest nests can often be located on Conifer branches and buried among ivy, often suspended near the end of a branch on a spruce or fir tree.

The nest is made from moss, lichens, spider webs and lined with feathers, and these nests are made in a way that it is spherical, hammock positioned, three layered, well insulated and clean.

Usually, the female make the nests during breeding season while the male source for food for their young ones.

Another European species of kinglet, the Common Firecrest, simply known as the Firecrest, is an incredibly rare bird in the UK and there are only 550 known breeding pairs.

They are known to breed in lowland broadleaf forests and often make pendulous nests 2.5 to 20 meters high.

These nests in turn, comes in the shape of an open cup and have about three layers and a small entrance hole at the top.

Also check out this article on birds that use camouflage

This bird species can rarely be found on the ground, and they are very sociable too. Outside breeding season, they can be seen with other species of birds..

They make their nests with plant fiber and lichen and it takes about 3 to 7 days to successfully build their nest.

Here’s a fact about Warbling white eye: They steal some materials from other birds to save effort and time when making their nests. Hmm!

Golden crowned kinglets are small songbirds that can be found in the United States and Canada.

They make their nests in trees, as high up as 100 feet.

The nest is an intricate construction process and it involves suspending strands of spiderwebs, bark strips, grasses, plant fiber, cocoons, and caterpillar silk into a hammock-like nest, hanging from small twigs or branches.

These nests are often elastic in nature, and this is because as these bird species grow and reproduce, they will surely require more space to be comfortable.

The Purple-Rumped Sunbirds are usually found in South Asia and Australia, and are common wild birds.

This Sunbird species make a nest that hangs from the branch of a small tree or a bush.

Both the male and the female build a flask shaped nest, made from fine plant fibers, cobwebs and the outer parts is made with lichens, bark pieces, flying seeds and other materials.

The entrance of the nest has a porch at the top and bottom.

An interesting fact about the Purple-Rumped sunbird is that after making these nests, they actually abandon it for a while.

Then, the females come back to lay her eggs which then, hatch after a week.

The uniqueness and diversity of these birds is totally intriguing. They are blessed with the art of making beautiful nests.

While some birds build their nest on the ground, others make pendulous or pensile  nests in lofty trees.

They camouflage inside the nest to escape predators, they take care of nestling repair the nests at the same time.

They also add comfort materials like fur, feathers, and downy plants to give them maximum comfort in their little home.

This often leave us wondering how they are able to build hanging nests. Well, they are created like that and are intelligent too! 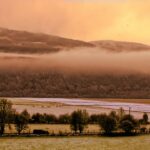 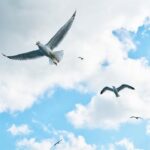