We all know that birds fly, this is their most popular method of movement. We have all observed it and gotten accustomed to it.

However, there’s a unique ability some birds possess and this is the ability to hover.

Do you know the special birds that can do this?

Hovering is not just flight, a bird can remain in one position, suspended in the air without moving forward or backward.

Some birds use this ability to hunt, others use it while feeding. Let us take you on a journey exploring some birds that have this ability.

These birds we are going to explore below hover by combining backward wind strokes with forwarding wind strokes so they maintain a single position in the air.

Others reduce their wing movement so that they settle in the wind and “windhover”.

Most time you see a Hummingbird it is most like hovering and feeding.

You can find hummingbirds all over the world, there are about three hundred and sixty species of hummingbirds.

Without their advanced flying and hovering ability, they would have probably gone extinct.

They use their wings expertly to survive in the wild.

This is also a bird that can hover. Terns are seabirds, you can easily find them hanging around water.

They like wetlands, seas, and rivers, they have adapted to living around bodies of water so much that they have the ability to skim along the water, this is a form of “wind hovering”.

As stated above, hovering this way is involves little wing movement as the birds simply settle into the wind. This enables the bird to hover and it doesn’t move anyhow.

For terns to thrive around water they use this technique to “hover” above water, this way they can easily see fishes, other sources of food and easily snatch them from the water to feast on them.

Without this adaptive hovering, Terns would have probably gone extinct or would not live close to bodies of water.

Just imagine how it would be difficult for these birds to feed if they cannot hover.

Related: Here is an article I wrote on birds that glow in the dark

This is also a hovering bird. It is a predatory bird And they mainly live in cold areas, places like  Europe, Russia, North America.

Birds of prey need as many skills and abilities as they can get considering that they are hunters.

If a predatory bird is not adapted to be the best predator possible it would suffer greatly.

The ability of rough legged buzzards to hover gives it an advantage when hunting because it hovers it can take its time to find even the smallest of prey over a vast expanse of land.

So, just imagine a bird of prey that cannot hover but wants to hunt over large open fields, the constant flying and movement could constitute distraction and reduce their effectiveness as hunters.

The wings of these birds can grow to 24 inches, This enables them to hover well in cold areas and easily swoop to snatch prey without having to expend too much energy.

This makes them great hunters in areas that are very cold. This is because cold areas make movement more noticeable.

Hawks are popular birds of prey and they hover.

Hawks are known for being great hunting birds, you will probably think of the tenacity has hunters before any other feature of a hawk.

They are tenacious hunters that can  Spot prey from great distances. this necessitates the use of multiple flight techniques and maneuvers by Hawks.

If they are unable to fly in a variety of ways and maneuver great terrain they would not be so renowned as hunter birds.

One of these flying techniques that hawks use is hovering.

They are actually one of the best hovering birds, their hovering does not prevent them from reacting quickly and Accelerating to snatch prey.

You can see that their ability to hover adds to the fact that they are ferocious hunters.

This list would not be complete without mentioning Eagles, easily the most popular birds in existence.

They can easily be considered the top bird of the avian world. They are vicious, tenacious, intelligent, and strong.

You might not know this but they hover. Yes, Eagles too hover, They are such fearsome hunters that they are not scared of going after big animals, and part of the tools they have in their arsenal is the ability to hover.

This gives them the unique advantage of being able to spot prey from afar,  They don’t hover just to spot prey, they hover also to study the environment they want to hunt.

They soar high above their prey, hover to analyze the environment, the prey, and other elements necessary to make their hunt successful, once they are done with the assessment and everything aligns, they swoop down and kill their target.

These are also hovering birds, they can hover as high as sixty feet above the ground. This way they easily sight small animals like lizards to feast on.

They also eat insects. Kestrels are quite intelligent and they apply this intelligence in their hunting.

They hover in the wind while assessing the terrain they are interested in hunting from.

This way they get to see a lot of potential prey but they go only for the most viable option.

Their hunting pattern is quite similar to that of falcons.

You might not have seen this one coming, vultures hover too.

These birds are the most popular scavengers of the sky, they can be called the hyenas of the sky.

Hovering helps them save energy while they wait for any animal they would prey on to die so that they can feast on the carcass.

You can always see them hovering over a potential meal.

They are known for this, they can hover over an animal that is about to die for hours waiting for the ideal time to consume the corpse of that animal.

This system of ‘hunting’ gives vultures the advantage of having first pickings of any dead animal they have set their sights on.

Vultures are one of the biggest birds that hover, they are known for watching while they wait for their targets to die so they will consume the dead flesh of the target.

They generally don’t confront animals alive. This waiting and watching is heavily facilitated by their ability to hover.

In this article, we have explored some birds that hover. It is safe to surmise that hovering is a great skill for any bird that Hunt.

Hovering gives them that extra element that sets them apart on increases their chances of survival in the wild.

Birds that hover include vultures, hummingbirds, kestrels, Hawks, Eagles, and others.

Hummingbirds are considered the best offers out of this collection of birds,  day by far have the fastest wings as their wings move at 80 beats per second.

You would have distilled from this article that hovering gives this bird an advantage when you compare them to other birds in the aspects of surviving, getting natural food, hunting, and adapting to their environment. 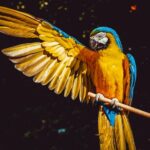 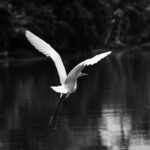