The night is a mysterious time, any creature that is active at night is considered a mystery.

There are birds that have mastered the night, they are usually awake when we sleep and this is the time they hunt for food.

Many people are ignorant of these nocturnal birds, However, if you stick with us we are going to explore a number of them And get you acquainted with this unique set of birds.

There is a considerable number of birds that hunt mainly at night.

This is not known by many people as many people assume that it is only owls, the most popular nocturnal birds that hunt at night.

Obviously, this is not true they’re birds like Kiwis and nighthawks that also hunt at night. This is going to be the focus of our article.

They don’t entirely hunt only at night because circumstances might make them hunt during the day, let’s say they get hungry or they couldn’t find enough food during the nights you could very well see them hunting in the day.

Perhaps the most popular of all nocturnal birds, most owls out of the over 200 species are nocturnal.

When you think of the bed most associated with night this is probably the one that comes to mind. The species  of owls include:

Hunting is one of the main things that nocturnal owls do at night.

They hunt food and consume their food at night so they spend most of the day resting.

In adapting to this kind of hunting pattern, their night vision is excellent so it aids them, they also have great hearing and a stellar sense of smell.

Nocturnal owls Usually have dull plumage so they can camouflage in the dark,  they are very smart and move stealthily.

All these combined make them a force to be reckoned with when hunting at night.

Nocturnal owls spend most of the day resting and sleeping because they hunt and work virtually throughout tonight.

Related: Here is an article I wrote on birds that hover

These nocturnal birds are found all over the world, the only places they are not found are Madagascar and  Antarctica.

They like to live in an open country. They are ground-nesting birds so they spend most of their time on the ground.

They derive their name from the jarring type of cry that they have. Nightjars consume insects mostly and they are nocturnal, they tend to hunt for insects at night.

They have some similarities with owls but they are not from the owl family. Owls are raptors and nightjars tend to get insects with their beaks.

These birds are usually nocturnal or crepuscular. They spend a lot of time in the night hunting.

They are not easily seen as the main reason people get to notice their presence is by the sounds they make.

Even during the day, you cannot easily make them out. Night hawks tend to live up to five years.

They migrate from their breeding ground located in North America all the way to the Amazon.

Kiwis are night birds, they sleep in the daytime and carry on with their activities at night.

The night is when they hunt for their food.

Kiwis are flightless birds and they are endangered.

They have wings but cannot fly. Their feathers are more fur-like than like actual feathers.

One of the unique things about Kiwis is that they molt year-round and their nostrils are situated at the end of their long beaks this is why they have the best sense of smell out of all birds in the world.

These birds are found only in New Zealand. They can live up to fifty years.

These birds also hunt at night, they spend most of their time in the day hidden and sleeping in trees.

They are very stealthy hunters.

They are related to nightjars.

They have that name because of how their mouth is, their beaks make their mouth look like that of a frog, this is very special as birds typically do not have this type of mouth.

They do not fly over long distances, their tongues are very long and forked.

These birds are considered the stuff of legends, they are not easily sighted because they are very secretive.

They are mostly nocturnal during summer.

They are seabirds and breed on islands such as those in Mexico and California. They feed on sea creatures that they hunt at night.

The name of this night hunting bird was recorded for the first time in 1050.

They are nocturnal shorebirds that have large heads and short necks, with short tails.

This makes them look swollen and funny. They don’t fly so high as fifty feet is usually the ideal height they fly.

They hunt and travel at night. They spend most of the day resting. They eat mostly earthworms and ground insects.

Just as the name implies this bird is a night bird.

They are found mostly in Eurasia, although you can find them scattered in different parts of the world.

These birds are not easily seen because they are nocturnal, you might have one living close to you and you would not see them.

These are also nocturnal birds that hunt at night, they can live up to 14 years.

They are accomplished hunters and thrive in the dark. their plumage Is adapted to help them move at night not really noticeable.

Some people consider them to be passed because they can attack plants and  Ground vegetation.

This is a nocturnal migratory bird that consumes mostly insects. They migrate to Africa during winter.

They mate, hunt, and move mostly at night.

Most birds that hunt at night have some similar features, their eyes tend to be large; perhaps this is an adaptive feature that helps them see better in the dark.

Sense of smell in birds that hunt at night is very acute, they can smell things from a very far distance.

This is an advantage because if they cannot see so well at night their sense of smell could compensate and help them be an even better hunter.

The hearing of these birds is also very sharp, they can hear things from a great distance an accurately locates these things.

These nocturnal birds also tend to have dull feathers that can serve as camouflage in the dark of the night.

Nocturnal birds should not seem so mysterious to you at this point. 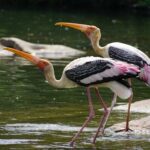 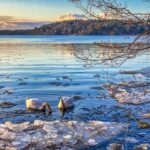