We have many species of birds worldwide; many migrate long distances in short periods.

The migratory birds make the long flights to and from breeding grounds to avoid the harsh winters that they must endure where they live.

The length of a bird’s migration path varies widely between species and even within the same species, with some migrating over enormous distances.

For example, Arctic terns, a type of bird, have been observed to fly over 90,000 km in a single trip.

In spite of its small size, the Red Knot can travel nearly 15,000 km each year, from the southern Chilean and Argentinian shores all the way up to the Canadian Arctic Archipelago in the north.

The Rufa Red Knot, an Atlantic subspecies of the Red Knot, was designated as vulnerable under the American Endangered Species Act in 2014 due to coastal development and overharvesting of horseshoe crab eggs as an essential food source.

Another name for this globetrotter is Tasmanian Muttonbird.

This migratory bird takes a round-the-world trip every year, starting from its breeding grounds in Tasmania and southern Australia and traveling through Russia’s far east to Kamchatka and then to Alaska’s Aleutian Islands.

They cover 30,000 miles in a year. They can fly for a long time while conserving energy since their bodies are perfectly fitted for gliding above the water.

However, even after covering such vast distances, they seem to find it necessary to return to the same burrow year after year.

Although there have been reports of population decreases in some locations, the total number of these seabirds in the Australian seas is still estimated at over 20 million, making it the most abundant species found there.

Related: Here is an article I wrote about birds that use birdhouses

It’s impossible to compile a list of bird migration records without mentioning the Arctic Tern.

The Arctic tern is one of the rare birds that migrate from pole to pole.

During August and September, Arctic terns depart Greenland for the Weddell Sea, which begins their migration pattern on the Antarctic coast.

Some people believe that these birds make a pit break in the middle of the North Atlantic on their trip south, with some continuing along the west coast of Africa, while others follow the coast of Brazil.

However, there isn’t a clear reason why they do this.

The Northern Wheatear, a little bird that is approximately the size of two tablespoonfuls of salt, migrates 18,000 miles annually between its breeding and wintering habitats, traversing 9,000 miles of Open Ocean, ice, and desert.

A large portion of this species’ range includes the northern hemisphere’s arctic regions such as Alaska, the Bering Sea, Greenland, and the Canadian Arctic.

Afterwards, it heads to the continent of Sub-Saharan Africa, where it spends the winter.

The Barn swallow is one of the swallow species that migrates a considerable distance. They are capable of traveling around 11,660 km.

Their breeding ground is in the region of North America, Europe and other Northern Hemisphere, where they breed in groups.

Then, they migrate to spend winters in the Southern Hemisphere by crossing a huge part of the ocean and land.

They cross a large ocean and land area to get to the Southern Hemisphere to spend the winters.

Due to their diet of airborne insects, this species belongs to the inland bird category.

Barn swallows prefer to fly over land rather than the water since these particular insects can only be found on land.

The remainder of the year, when Barn Swallows aren’t traveling, you’ll find them around lakes, grasslands, and rivers near where they used to be breeding.

The eastern section of South Siberia is home to a stunning bird species like this magnificent one.

An insect-eating terrestrial bird, this species mostly eats insects. As a result, instead of searching for food in the ocean, this bird flies over the shoreline.

During its migration, it passes through the Arabian Sea. Finally, they spend the winter in Southern Africa.

Although these hardy geese don’t migrate for the longest periods, no other species fly as high as they do.

These birds migrate from their breeding grounds in Mongolia, the Tibetan Plateau, and northern China to their wintering grounds in India using less than 10% of the oxygen available at sea level, reaching elevations of up to 7,000 m without assistance from tailwinds.

Despite finding that they save energy by flying at night and hugging the mountainside while doing so, scientists are still uncertain of the genetics that underlie their exceptional resistance to the elements.

It’s an amazing bird. The Great Snipe flies at a top speed of 390 km/h while diving for prey.

During the winter, they go from Scandinavia to the region of Sub-Saharan Africa. During such migrations, they cover a distance of over 6800 km.

It’s fascinating to note that these Great Snipe don’t stop migrating at all. It’s hard to gain weight when you’re on the go all the time like that.

As a result, they go to great lengths to bulk up before embarking on their journey. These birds have lovely, vibrant feathers, but they also have some unique beaks!

Depending on the bird, beaks can range from enormous to bizarrely little and bizarre designs.

Another migratory bird with a high record is the bar-tailed godwit. The thought of a nine-day flight with no rest and no food is unfathomable.

This 11,000-kilometer journey from Alaska to New Zealand is completed without a single rest stop.

This species has a wide range, but its population is rapidly dwindling because of the destruction of its natural habitat.

These birds have a remarkable will to live that should be admired.

These penguins migrate from their breeding colony in the Ross Sea region of Antarctica to their wintering habitats and return, on average covering 13,000 km (8,077 mi) per year.

Due to the fact that the sun does not rise south of the Antarctic Circumference during the winter, these penguins are hampered in their quest for krill-rich waters.

During the frigid months, they keep wandering to the ice’s edge as a solution to their problem.

They wait for the ice to melt in the spring and then return to the center.

As a result, their numbers are increasing, even though climate models predict a reduction, especially in East Antarctica, where they reproduce the most.

There are millions of bird species in the world. Each with its own unique traits and behavior. The migratory pattern varies depending on the bird species.

These birds move between their breeding ground and their wintering habitat every year. Some can fly for long without stopping for a break.

Birds that travel long distances can be found in various geographical locations in the world. 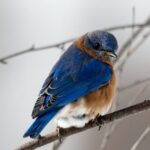 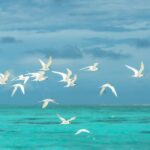