Chickens generally are not picky about their playmates or friends, they get along quite well with other animals, as long as they feel safe and there’s plenty land for them to dig and look for food.

The thought of that  is even hilarious. Their small sizes also means alpacas will not see them as threats.

Introduce the alpacas and chickens early and allow them grow used to each other, this will help them get along faster.

Chickens generally are not picky about their playmates or friends, they get along quite well with other animals, as long as they feel safe and there’s plenty land for them to dig and look for food.

Are alpacas good with chickens?

Alpacas are good with chickens when they are trained properly.

Alpacas should be introduced to the chickens early so that they can get used to each other.

It has to be a gradual process and under supervision until they get along well.

If your alpacas are not used to the chickens, they can get spooked by them and run them over while they’re running away.

The chickens should also learn not to bother the alpacas or attempt to play with them when they aren’t interested.

Why are alpacas kept with chickens?

Alpacas are kept with chickens mainly for protection.

Alpacas are herd animals and protect their herds and young ones fiercely.

When introduced to chickens, in time they adopt them as their herds and protect them from predators.

Chickens are always in danger from predators like raccoons, foxes, snakes, dogs etc. which alpacas can protect them from.

Most of these predators are opportunists that only attack weak and defenseless animals.

Keeping alpacas with your chickens will make them stay away.

If they actually do come, alpacas can chase them off and even kill them.

We have seen cases where alpacas stamped foxes and coyotes to death.

So they are good protectors for your chickens.

There are several things to note and consider before keeping your alpacas with chickens.

This will help you know if it will work for you, if you can handle it, and how you can go about it.

Due to their different nutritional needs, alpacas and chickens do not eat the same thing.

Alpacas are pseudo ruminants while chickens are poultry birds. You cannot feed your alpacas chicken feed and your chickens cannot eat alpaca feed.

When feeding them, you should separate them.

The alpacas will graze on, ignoring the chickens while the chickens roam around digging the earth for worms and insects.

Sharing a pasture even means the alpacas are able to protect your chickens while they roam.

Alpacas and chickens cannot be housed together.

They have different needs and flooring for their houses.

Due to their different sizes, it would not be a wise decision. The chickens could be stamped.

Also, chickens mostly sleep in coops which are  not possible to house alpacas in.

Alpacas and chickens could however share a barn if they are divided into different stalls.

This makes it easier for the alpacas to protect your chickens from predators during the night.

If the alpacas and chickens have been trained to tolerate one another, there should be no conflicts.

In some cases, the alpacas and chickens even bond and get along very well.

Because alpacas are much bigger than chickens, they do not see them as threats or rivals.

They rather see them as part of their herd which they should protect.

To avoid conflicts, alpacas and chickens should also be separated during feeding.

They can however share a pasture with no issues at all, as chickens do not eat grass.

You have to keep this in mind while rearing them together.

Animals and poultry also need different medications and vaccinations to keep them healthy.

This is why you have to make sure your alpacas and chickens get the necessary care they need to grow healthy.

Appropriate feeding and housing also helps to keep diseases away.

In fact, it is impossible for them to mate. Keeping them together pose no risk of accidental mating or pregnancy.

This is one of the reasons alpacas are the best guard animals for your chickens.

Alpacas can live with chickens.

In fact, chickens are the easiest animals for alpacas to live with.

They are different in sizes and shapes that the alpacas do not feel threatened by them.

The alpacas instead adopt them as part of their herds and protect them.

They can also share pasture. The alpacas graze while the chickens follow them digging for worms and insects to eat.

They cannot however be housed together.

The alpacas can stamp the chickens by mistake, which you wouldn’t want.

They eat different feeds and cannot be fed together.

Diseases hardly get transmitted between the two but it isn’t impossible.

This is why you should make sure your animals are well taken care of and they are fed well.

It reduces the risk of infection and helps them stay healthy. 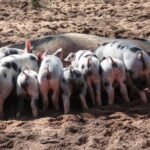 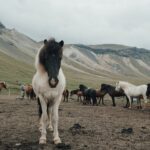