While raising alpacas and goats should not present any problems, you will need to factor in some of the different needs of each species.

The major one being their nutritional needs – being ruminants they eat mostly grass and hay but each species is going to need supplemental pellets and minerals according to their specific dietary needs.

Can alpacas live with goats? Alpacas are animals that belong with each other. Yes they can and do survive living or sharing a space with other animals but these stories are usually the exception

As for me, I will advise that you do not intentionally pair an alpaca with another animal if you want them to thrive.

What are the pros and cons of keeping alpacas and goats together?

While there are some people who will welcome the idea of keeping goats and alpacas together, there are others who will scream and say you are making a huge mistake.

In my opinion it depends on your preference and what you want to achieve.

The most important thing to consider is that alpacas and goats can share the same space and also stay warm together when it’s cold.

While they can share the same space, there is also the risk of injury as bigger alpacas can cause injury to smaller goats by kicking them.

Alpacas and goats eat different parts of plants so they can actually be pastured together and then fed the same food.

And another benefit of keeping goats and alpacas together is that alpacas can actually act as protectors and help protect goats from predators.

Alpacas can protect smaller goats and keep them safe from predators, but they are not necessarily guard animals.

So do not expect them to guard your farm animals against large animals or carnivores.

If you really want to ensure that your goats and alpacas are safe, then you want to use a guard fence, that goes around your farms and keeps your animals safe.

What animals do alpacas get along with?

One thing I can say about alpacas is that they are animals that like to live alone among themselves.

They usually do not mix a lot with other animals

Here are some animals that alpacas get along very well with

One thing you should be wary of is putting them in the same place with horses or cows.

This is because doing so might cause them injury from being kicked.

Goats and alpacas get along very well because they are all ruminants and they eat from the same grass, but like i mentioned earlier you need to check out each one’s specific dietary requirements and don’t put them all together in the same feed.

Also raising sheep and llamas together with alpacas should not cause any potential issues.

Especially llamas, they all come from the same family and raising them together will definitely not cause any issues.

Cross Grazing Alpacas and other animals

This is usually a very good solution for reducing the very long grass that grows around alpaca middens.

While you might have problems getting alpacas to eat this grass until the midden is well broken down, sheeps and goats do not have this reservation.

One safety issue you are going to deal with while raising alpacas in the same paddock is not to have them with big animals such as beef cattle or horses.

This is a continual issue for most farmers and when cross grazing you should give consideration to the type of internal parasites which most animals have in common.

Since sheep, goats and cattle share many of the same worm types that affect alpacas and because they leave dung indiscriminately all around the paddock, putting alpacas in together with any of these animals or immediately after they have moved out  increases the risk of parasite infection for your alpaca who are then forced to eat near the faeces of the preceding stock.

A better practice is to graze your alpacas in the field ahead of the sheep/goats/beef – this reduces the risk of infection to both your alpacas who prefer eating in a clean field, and your other animals, since alpacas create middens but leave most of the field clean of faeces.

The other stock will eat the grass down close to the alpaca midden.

Cross grazing with horses is a good option as horses and alpacas do not share the same parasite species.

However a kick from a horse can easily break an alpacas leg or kill a cria – and even quiet horses will kick when startled. So keep your horses and alpacas in separate paddocks.

Personally I will advice that to minimize the risk of worm infection, you should not cross graze your alpacas with other animals.

Instead what you can do is practice something called rotational grazing

Or you give the paddock a break of 3 – 6 weeks before you introduce your alpacas. This is will essentially help you reduce or completely destroy any case of worms affecting you alpacas. 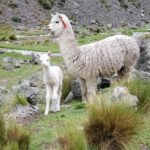 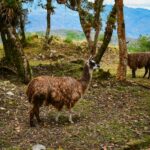