Alpacas prefer their own company.

They like to be among the herd. But it is not unusual for alpacas to be kept with other animals.

In fact, with proper training, they could even learn to bond and interact as companions.

Domesticated pigs which are called swine are smart and social animals. They can be quite moody but when properly trained they can live with other animals.

Can alpacas live with pigs? Alpacas can live with them peacefully, if adequate care is given and you have all the right information. In fact, with proper training, they could even learn to bond and interact as companions.

You should note however that pigs are omnivores, which means they eat flesh. You might want to think about that before keeping them with small animals.

Are alpacas good with pigs?

When properly trained, alpacas are good with other animals.

Will the other animals be good with them though?

If you want your alpacas to live with pigs, then you have to introduce them early. Allow the pigs meet with the alpacas while the pigs are still small.

This way, the alpacas will get used to them gradually.

It is not however advisable for alpacas and pigs to live together.

They may fight, wanting to establish dominance, since both animals are keen on hierarchy.

It will not be a surprise if your adult pigs decide to kill and eat baby alpacas. They could also kill weak alpacas.

If you are determined about keeping them together however, make sure they are separated. Avoid the animals grazing together, and do not house them together.

Why are alpacas kept with pigs?

Alpacas can be kept with baby pigs/ piglets to protect them if their mothers are not available.

They are good protectors and are used on most farms as guard animals.

Alpacas can also be kept with pigs if the farmer likes to keep different animals on his/her farm.

Related: Here is an article I wrote on “can alpacas live with cows“?

There are a lot of things to consider before keeping alpacas with pigs.

Apart from the fact that it is highly risky, they have some unique differences that may make it difficult.

Let’s look at a few of these things so you can take note of them.

Alpacas are herbivores while pigs are omnivores, so obviously they do not eat the same thing.

Pigs also eat grass, but they graze differently from alpacas.

Alpacas graze fairly and evenly, but pigs root and dig the grass with the earth.

Introducing pigs to your alpacas ‘pasture can lead to ruin.

Ensure you have a very large pasture so that you can rotate their grazing. This will help solve the problem. You can also ensure your alpacas graze first.

Alpacas also require supplements that are different from what pigs need.

So it is best to separate them before feeding them.

Pigs can also be messy and poo around their water, while alpacas are very neat animals.

Feeding them together is not a good choice.

Alpacas and pigs are so different in nature, that housing them together would be impossible.

Alpacas are tidy and do not litter their house or environment, while pigs are the opposite.

Pigs will poo all around and mess with their water trough. Keeping them together will cause conflicts and lead to a lot of diseases.

If you want to keep them in the same barn, separate them into different stalls with enough space for all.

Conflicts can arise if alpacas and pigs are not properly trained to tolerate and accommodate one another.

Pasture rotation is best if you don’t want your alpacas and pigs to fight during grazing.

It is also best to feed them treats separately.

Conflicts can also arise by housing them together. To avoid fights for dominance and space, keep your alpacas and pigs in different stalls.

Keep baby and weak alpacas from pigs. The pigs might be tempted to eat them.

Diseases are not usually transmitted between alpacas and pigs. It is however important that you keep their house and environment tidy in order for them to stay healthy.

Alpacas and pigs also need different injections and vaccinations to keep them healthy.

Neglecting these can result to you losing your precious animals to various kinds of diseases.

Though diseases can hardly be transmitted between alpacas and pigs, Cytic Echinococcosis is one disease that could be transmitted from one to the other.

It is wise to constantly deworm these animals to reduce the level of worms in their body. It helps them stay healthy.

Interbreeding cannot occur between alpacas and pigs. At least, it has not occured yet. The possibility of this happening is also very slim.

This does not mean you should house them together though.

It may be impossible for them to mate, but housing them together should be avoided because of the other risks involved which I have explained.

Alpacas can live with pigs and even be good with them.

They just have to be properly trained to accommodate and tolerate one another’s presence on the farm.

They may not become friends but they won’t bother each other.

Alpacas can serve as protectors for piglets as they are used as guard animals on several farms.

Alpacas and pigs do not graze the same way and do not eat the same feed.

They cannot be housed together as this can cause conflicts.

If they are going to be in the same barn, separate them into different stalls.

Diseases cannot be easily transmitted between the two animals but it isn’t impossible.

Proper hygiene should be maintained on the farm, and their medications and vaccinations should be given to them regularly.

This reduces the risk of getting infected or diseases spreading.

In fact, mating cannot occur between the two, but this does not mean they can be housed together. 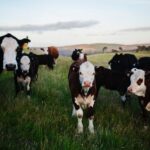