Both animals can live together. Donkeys are primarily used as guard animals to goats and sheep.

However, some donkeys exhibit more territorial behavior than the others, resulting in either antagonistic behavior or guardian behavior.

But it all depends on the animal involved.

The behavioral characteristics at play have a significant impact on how well they work together.

Some donkeys and goats get along swimmingly—others, particularly those rescued from abusive or neglectful homes, maybe more territorial and defensive in their interactions with all species, even goats.

Donkeys rescued from abusive or negligent environments may react aggressively to other animals in their space (and in terrible cases, may even cause fatalities), mainly if they have been accustomed to significant resource shortages.

So it is vital to understand the behavior of these animals before placing them together, which can have a detrimental effect if donkeys act aggressively.

Feeding donkeys and goats together?

It is not recommended to feed donkeys and goats together.

Due to the fact that goat feed is typically enriched with vitamins and minerals unique to goats, it is incompatible with donkeys.

In addition, donkeys do not require additional iron and copper. Therefore, they would fare much better on hay.

Donkeys are desert creatures that evolved to forage in the wild.

Their digestive processes are not adapted for the digestion of animal or goat feed.

Frequently, they are too rich or fortified for donkey digestion. Therefore, they are more adapted to roughage.

Goats are gregarious creatures that require at least one other goat for companionship and get along with other animals like cows, sheep, horses, and donkeys.

Additionally, they get along with cats and the majority of dogs.

How goats and donkeys interact is dependent on their personality.

Certain types of donkeys get along nicely with goats—others, particularly those rescued from abusive or neglectful environments, may be more territorial and defensive in their interactions with all species, even goats.

Always keep a close eye on the pasture and carefully introduce donkeys and goats, keeping in mind that they may need to live separately.

Related: Here is an article I wrote on donkey breeds that are good for riding

How Do You Prevent Fighting and Competition between Them?

To avoid conflict and competitiveness amongst them, guarantee the good introduction of the animals to become acquainted.

For example, there are times when some goats will want to raise their head to assert dominance, but it never lasts as the donkey just picks them up by the neck and shakes them.

Note that they may need to live apart.

Goat feed is unhealthy for donkeys since it contains minerals that they do not require.

Can You Raise Them Young Together?

Yes, if you intend to employ donkeys as security animals, it is better to start them early. Then, as a result, they can grow alongside one another.

After the donkey has been weaned, keep it among goats. Allow guard donkeys to run separately from other donkeys or horses.

Thus, the baby donkey will believe it is a member of the flock or herd.

In an ideal world, the donkey would be born into the flock or herd, and its dam removed at weaning to allow the newborn animal to grow alongside the animals.

It is vital to monitor them since young donkeys may desire to play with baby goats, resulting in injury.

Often, donkeys may murder goats, either out of territoriality or as a game.

Donkeys amuse themselves by gripping each other’s necks and frequently break a goat’s neck in the process.

Not every donkey will attack the thing they are intended to guard. It truly depends on the animal in question.

If he was raised around goats or sheep, I believe he would be fine.

However, maintain an eye on him. While not all donkeys make excellent security animals, there are certainly some that do.

Therefore, they do not patrol the pasture, preferring to feed and socialize with the livestock until a threat arises.

Donkeys remain attentive while grazing due to their huge ears and wide field of vision, but they don’t get scared easily like horses, making them more likely to stand their ground and confront a threat.

Also check out this article on keeping flies away from donkeys

Can Donkeys And Goats Cross Breed?

No. Goats and other animals have been cross-bred like sheep and deer but never with donkeys.

However, there’s a hybrid called geep, a cross between a female sheep and a male goat.

Donkeys and goats can coexist peacefully. Therefore, they are frequently used as guard animals.

However, not every donkey is a good fit as a farm protector. For example, Jacks, or intact male donkeys, are typically overly harsh with sheep, causing injury or death.

Similarly, donkeys that have never been among livestock may exhibit hostile behavior when placed in the same pasture.

The best method is to confine the newcomers in an adjacent pen for two to four weeks so they can get acquainted through the fence before attempting an introduction.

Unfortunately, not all donkeys make good guardians; some will never tolerate strangers or even newly born kids. 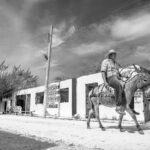 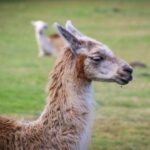