Donkeys can get laminitis also known as grass founder is an ailment that can affect donkeys when they have too much treats or sugary grass. Laminitis is a common disease in donkeys, horses and other equines

Donkeys even though they love food, are prone to being obese and when they eat lush green grass they get overweight easily and can contract laminitis.

As a new donkey owner, seeing your donkey down with laminitis might be frustrating.

It is important to be able to understand the signs and symptoms of laminitis, the causes and what you should do once you notice your donkey has contracted laminitis.

Laminitis is an ailment which is caused by damage and severe inflammation to the hoof of the animal and the coffin bone.

The donkey’s experience might range from soreness to a cleavage between the hoof and the coffin bone depending on the severity of the laminitis.

Laminitis most usually occurs in the front hooves of the donkey and this is because it is the part that bears most of the weight. It however also occurs in the hind hooves.

It is a common ailment. It is extremely painful to the donkey as is evident by the way they limp and it is sadly recurrent especially in overweight donkeys.

Laminitis doesn’t lead to death of the donkey but if the owner the treatment outlook is poor or the donkey isn’t responding to treatment, they might decide to put the donkey down by euthanasia.

Related: Check out this article I wrote on why do donkeys bray?

What Causes Laminitis In Donkeys?

Laminitis has been known to be caused by different causes.

The way laminitis occurs through these causes has not been totally figured out by scientists, however it is important to know these causes so as to be able to prevent it happening to your donkey.

Some of the causes include;

What Are The First Signs Of Laminitis?

The clinical signs of laminitis which can be noticed at the onset of the ailment include:

How Do You Treat It In Donkeys?

Once you notice signs of laminitis in your donkey ensure you call the veterinarian for immediate treatment.

Prompt treatment by the vet doctor can ensure the laminitis doesn’t become chronic and recurrent.

The first thing to do is to move the donkey to a comfortable space.

Proper bedding made from soft hay and shavings should be provided for the donkey and food and water should be placed close at hand so the donkey doesn’t have to move around too much.

Dietary restrictions should be immediately placed on the donkey’s diet and so as to stop any inflow that might be caused from excessive grain or carbohydrate intake.

Treatment prescribed by the vet should be strictly followed and all medication and antibiotics given to be used as stated.

A donkey can recover from laminitis once it is treated promptly however you should note that laminitis can recur.

As such there are preventive measures to take to stop the ailment from recurring in the donkey including placing the animal on a strict nutritious diet, regular hoof care and grooming, giving supplements and avoiding lush grass that might cause high carbohydrate content for the horse.

It is more important to prevent and treat laminitis promptly to avoid the loss of your beloved pet donkey.

Also check out this article I wrote on how do donkeys sleep?

How Quickly Can Laminitis Come On?

Laminitis can be triggered by its different causes such as overeating lush grass and the first signs of laminitis can begin to show between 20 – 72 hours of the trigger event depending on the cause.

Other trigger events can be an injury or a metabolic reaction.

One of the major problems of discovering and treating laminitis is the fact that there are many causes that could trigger the onset of the ailments.

However an observant donkey owner would be able to notice the early signs of laminitis in his donkey.

Within the first hours of the onset of the ailment, the donkey would experience a lot of discomfort, shifting from hoof to hoof, hotness and rise in temperature to mention a few.

Quick medical intervention and treatment is the best way to take care of the donkey at this point.

Can A Farrier Cause Laminitis?

Some donkey owners have reported their donkeys going lame and contracting laminitis after visiting the farrier.

Though much of it has usually been put down to the horse being footy, a farrier can in fact trigger laminitis.

This happens when the farrier trims off too much of the shoe in one go thereby making the horse go lame in that foor.

Also,  a donkey who doesn’t get regular hoof care is more prone to contracting laminitis.

Delays before shoeing and farriering can cause damage to the laminae making it easy for the donkey to contract laminitis.

If the donkey is stressed out regularly, farrier visits are supposed to help ease the pain and stress by trimming the foot and shoeing.

Neglected hooves are more strained and stressed and as such easy to get laminitis.

It is also easy for the farrier to notice early signs and symptoms of laminitis in the donkey.

As a donkey owner you should ensure your donkey doesn’t miss farrier treatments and your farrier should be an experienced one with lots of knowledge and patience.

Can Donkeys Get Laminitis From Hay?

Donkeys cannot get laminitis from hay. Grass hay, haulage and straw is the ideal nutritional feed proportion your donkey needs to grow without having any medical problems or getting obese.

Hay is a better choice of feed for your donkey as the percentage of dry matter in hay and straw is much higher than that of the lush green grass which your donkey feeds on in the pasture.

It is also low in protein and great for the donkey’s teething.

Lush green grass has been pointed to as the cause of about 50% of laminitis cases.

This is because the lush grass has a high density of sugars and starches which when broken down can create a substance which can damage the basement membrane which holds the hoof and coffin bone together.

Hay and straw are healthier options for your donkey.

Should You Walk A Donkey With Laminitis?

You should try to keep a donkey with laminitis off his feet as much as possible to ease the pain.

Because donkeys do not easily show their pain, it is common for laminitis to have settled in before the donkey owner notices the signs.

Once you notice your donkey has laminitis, move the donkey to a softer resting ground and away from any lush pasture.

Feed the donkey hay until the veterinarian says otherwise and follow all treatment as prescribed by the doctor.

Your donkey contracting laminitis can be a scary episode especially when you are a new donkey owner.

The best way to avoid laminitis issues is by prevention.

Regular hoof care, good nutrition and diet and regular exercise will help ensure your donkey doesn’t fall into the clutches of laminitis. 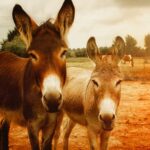 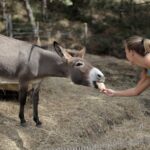