If you are a livestock farmer at heart and you have a backyard or space in your home, then your dream would be rearing different kinds of animals, keeping them on your farm to add life to it.

Knowing which animals can be kept together is however necessary before adding all kinds of animals to your farm.

Can goats and turkeys be kept together? Yes, turkeys can live with goats. Turkeys are friendly animals and get along with most animals they live with.

Animals have different personalities and diseases that can affect them based on their species.

Turkeys and goats are two animals that can actually be kept together though.

It’s been done on most farms without issues.

With proper training and the right information, your goats and turkeys can be kept together on the same farm without dire consequences.

Can turkeys live with goats?

Yes, turkeys can live with goats. Turkeys are friendly animals and get along with most animals they live with.

Goats and turkeys can live on the same farm or reared in the same backyard without problems but a few things have to be put in mind for this to work well.

First, the turkeys have to be introduced at a younger age.

Bringing in goats to live on the same farm as your adult turkeys can cause problems.

The turkeys will feel threatened and get territorial about their space, wanting to establish their dominance and guard their territory.

This will cause harm because the turkeys can be trampled by the goats when fighting.

Also, if they’re going to be sharing pasture, the pasture should be kept clean always.

It shouldn’t be filled with turkey poop when the goats are grazing.

This helps to prevent diseases and keep your animals healthy.

You should also avoid keeping them in the same pen.

They should have different sleeping areas. This is to avoid fighting and stampede.

Related: Here is an article I wrote on can turkeys get bumblefoot?

Goats can hurt turkeys but they won’t.

Goats won’t hurt your turkeys especially if they got introduced early.

If both animals were introduced when they were still young, they would have gotten used to each other’s presence by the time they become adults and would have learned not to bother one another.

With time, your turkeys could even enjoy spending time with the goats, moving with them and foraging together.

You should also avoid keeping them together, especially at night. This can lead to goats hurting your turkeys while sleeping.

Is turkey poop bad for goats?

Infact, it is very bad for them. Goats ingesting turkey poop leads to dangerous infections.

Poultry poop contains Salmonella enterica and campylobacter bacteria which are very dangerous to the health of mammals when they ingest them.

It has been established through research that, two species of campylobacter bacteria leads to abortion in ruminants.

And the ruminants mostly affected by this are sheep and goats.

That’s one of the disadvantage of keeping turkeys with goats.

If you’re going to do it, make sure their space and pasture is clean at all times and free of turkey poop.

This is to save the lives of your goats.

Yes, turkey feed can kill goats so you’d better be more careful about keeping your turkey feed from your goats.

For reasons best known to them, goats love turkey feed.

Maybe it smells too nice, who knows. If they come across it, they will overeat, which can lead to diarrhea and bloating.

Even if they don’t overeat, turkey feed can still cause diarrhea and bloating in goats.

This can lead to their death.

So it is better you keep your goats away from your turkey feed.

Don’t feed your turkeys when your goats are around and leave them to it.

The calcium and phosphorus level in turkey feed is another reason why your goats shouldn’t eat them.

The content of these minerals are too high for your goats and could cause their death.

Not at all. You shouldn’t try it.

Try as much as possible to get different coops for your goats and turkeys.

These are some of the reasons why you shouldn’t keep them together in the same coop.

✓ Goats are not careful when it comes to walking and checking where they step before actually stepping.

This can be bad for your turkeys because your goats can accidentally step on their foot.

✓ Turkey poop is bad for goats as earlier explained.

What if your goats accidentally ingest turkey poop while sharing coop with turkeys?

✓ They have shared diseases.

There are some diseases that can be transmitted between them.

For example, Salmonella is a bacterium that resides in the intestines of birds.

It doesn’t hurt them, but when transmitted to goats, it can cause serious health issues.

Your goats do not even have to ingest turkey poop to get this, just sleeping on turkey poop could get them in trouble.

Another disease is cryptosporidiosis.

There are some advantages of turkeys and goats sharing coop but the disadvantages are much more.

This is why it isn’t a good idea.

Can turkeys and goats eat the same thing?

No, turkeys and goats cannot eat the same thing.

Turkeys are omnivores, which means they eat plants and animals.

Goats are herbivores, which means their feed is strictly plant based.

Goats cannot eat turkey feed as we have explained and given reasons.

I’m addition to the reasons explained above, goats’ rumen cannot break down and digest flesh or animal protein which turkey feed contains.

Goats do not really require protein in their feed but turkeys require a great deal of protein which the goats will find hard to process.

Turkeys can eat goat feed but they can’t survive on it.

They will be malnourished because it doesn’t contain all the nutrients required for their growth.

Goat feed is strictly plant based and contains little or no protein.

It’s fiber content is also difficult for turkeys to digest.

They can however feed on it occasionally as it is plant based and turkeys eat plants.

Can they cross breed?

No, turkeys and goats cannot crossbreed.

They belong to different species and have different reproductive organs which makes this impossible.

Turkeys and goats can be kept together but it isn’t advised as it can lead to problems.

They can however love together on the same farm or yard.

This is possible and attracts no issues if the animals are introduced to one another early.

They could even come to enjoy one another’s company.

Turkey poop is bad for goats and they can’t eat their feed too.

This is why they can’t share the same coop. It poses too many risks.

You should also note that turkeys and goats cannot crossbreed. 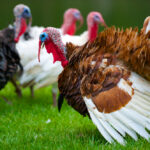 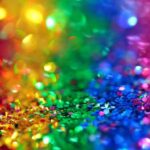