Birds are generally known for flying. But surprisingly not all birds fly. Most birds have adaptive abilities that permit them to walk only.

They are known as ground birds. An example of a ground bird is a peasant.

Hummingbirds on the other hand have amazing flying skills. But they are often seen flying, nesting or perching.

Can hummingbirds walk? Let’s find out.

Hummingbirds cannot walk. These birds do not hop either. This may come as a shocker because they have legs.

These birds are thought to be masters of the air. They practically never come to a halt in their flight.

Hummingbirds spend almost all of their time flying. Nonetheless, they don’t use their legs for walking because they have very tiny and weak legs.

However, these birds do have many unique things they do with their legs.

For instance, they can use their feet to scoot sideways while perched.

They also use their legs to scratch away mites and fighting invaders.

This article contains interesting facts about hummingbirds. Keep Reading on as I indulge your curiosity about them.

Do Hummingbirds Have Legs?

Hummingbirds sure do have legs. They have a pair of tiny legs which are weak. Their legs are not muscular.

Therefore, they are not fit for walking and hopping.

Their legs are as long as their feet. The anatomy of a hummingbird’s foot consists of four toes in total; three toes in the front and one toe in the back.

The back toe is called the hallux. This digit configuration is most common in birds that perch frequently.

The hallux is present for grip and it gives them balance. The hallux functions similarly to a human thumb.

This feature allows the hummingbird to perch on a wire or a tree branch more comfortably.

However, it is not used for walking.

When they fly, their legs are extremely short, and their delicate feet are neatly tucked under their bodies.

I guess by now you know that their legs aren’t useless.

Their legs are incredibly helpful to them. let’s have a look at what these birds do with their legs.

Related: Here is an article I wrote on can hummingbirds see color

1. Their legs are used for perching

Perching is common with most birds. And hummingbirds birds love to perch. These birds do this most of the time.

They would usually perch on a tree branch. They get a clearer view from here.

Perching is a means of resting for hummingbirds. Their wings are usually engaged the majority of the time. This is why they perch as often as possible.

When they perch, they like to pick a spot with an uninterrupted view so they can keep an eye on predators.

2. They use their feet for Scratching

They scratch to get rid of dirt from their body. However, when they scratch, they may have difficulties reaching their head due to their short legs.

They don’t just scratch for the fun of it. It’s a method of keeping their body clean. They also scratch out parasites such as mites and lice.

3. Their feet are a fighting weapon

As harmless as the feet of hummingbirds look especially when flying, it is one of their fighting tools.

When flying, their feet are either dangling below them or neatly tucked beneath their body.

Hummingbirds become aggressive and territorial when defending their nectar or food source.

They will fight with their feet and beak. Their long and pointy beak is the most obvious weapon, but they also use their feet to defend their territory or ward off a competitor.

4. Their legs are major equipment when making their nest

These birds are not just amazing flyers but great architects. They use their feet to make amazing things in the process of nest making.

Female hummingbirds do not only use their feet as a source of defense when attacked by predators, but they also compress and configure their nests to fit two coffee bean-sized eggs.

A hummingbird’s nest is both a delicate and beautiful architectural masterpiece. The nest is also a strong and long-lasting environment which is good to raise her young.

This nest however is built by the female hummingbirds.

To build a strong foundation, she gathers and assembles nesting materials such as grasses, animal fur, cotton fiber, plant material, and small twigs.

Hummingbirds have an almost invincible pair leg. They do not have legs built for walking. Everything around us does have a weakness.

In other words, can we say this is a weakness? These powerful birds have evolved so they do not rely on their feet for their hunting expenditure.

The real reason hummingbirds cannot walk is because their leg to foot length ratio is asymmetric.

Hummingbirds are not the supermodels or basketball players of the bird world – they just do not have the legs for it.

In fact, legs just might be the least interesting character of a hummingbird.

Well, the most obvious reason they’re unable to walk is that they possess short legs. They also possess disproportionate feet compared to the rest of their body.

Additionally, they have no knees and all these make them unable to walk.

The real obstacle is that the proportion of the hummingbird’s legs and feet do not allow them to engage in walking.

Also, hummingbirds can’t walk because their legs lack muscles. That means their legs are not strong enough to encourage movement.

Furthermore, their body weight is not equivalent to the size of their legs. They have very short legs compared to the upper body.

Their legs obviously can’t carry the weight of their body.

Many bird watchers are said to have seen these unique birds gliding. Gliding simply means the act of moving smoothly, continuously, and effortlessly.

Hummingbirds have stiff wings that do not bend. Their major characteristic is their wings.

These birds can rotate and hover more like a helicopter. They can glide all day without landing.

However, to achieve agility, hummingbirds give up their gliding ability. Rather than using less energy, they run at maximum speed all the time.

Hummingbirds live an energetic lifestyle. They rarely stop moving. They can hardly sit still. A typical hummingbird can die in two hours without feeding.

This is why they are constantly searching for food.

However, these little energetic creatures do take time out to rest. Yes, they do. They go into a torpor-like state.

Torpor is a hibernation-like act.

This act allows hummingbirds to conserve energy by slowing down metabolism, heartbeat, and respiration rate at night.

Do Hummingbirds Have Feet?

Yes, they have feet. Hummingbirds are part of the order of birds called Apodiformes. This is a Latina word that means “footless”.

Regardless of being a part of this order, they do possess feet.

As stated previously, a typical hummingbird posse four toes. Three of which are at the front and one at the back. These toes allow them to perch on a tree.

Hummingbirds do not use their feet to launch flight. They depend on their wings to do all the job.

Rather, they use their feet for perching, scratching, flying, and constructing the net.

Do Hummingbirds Have Knees?

Hummingbirds have short legs which are almost invisible during flight. Having short legs means having no knees.

It is no news that the ability to walk greatly depends on the knees. Hummingbirds do not possess this feature. This is why they are known to shuffle on twigs.

Despite how energetic, nature can’t be cheated. However, there are two possible reasons why hummingbirds may stop flying.

The first possible reason is to sleep. They stop flying when it’s sleeping hours. Usually, these birds search for a cozy warm tree.

Using its tiny feet, they perch on a tree. They go into a hibernation-like mood called torpor. This is a process of preserving their energy.

A hummingbird can also be seen not flying when it’s injured. Encountering injuries while they go about their daily activities is not avoidable.

When a hummingbird is injured, he would rest to incorporate.

Also, these birds may perch just to take a break. Although this may not be regular, it may however be the case some of the time.

Hummingbirds, however, possess enviable flying techniques. They are called hummingbirds because of the humming sounds created by their beating wings.

When a hummingbird flaps its wings, it creates a force known as lift and thrust. This action moves the little bird up and forward.

They can also rotate their wings backward, which creates the downward lift and backward thrust action.

They have amazing flying skills. Their wings are made of strong muscles that ensure the fly for a long period.

However, unlike other birds that can walk. They have very tiny weak legs that do not permit them to walk.

However, their amazing flying skill covers up perfectly for this downside of theirs. 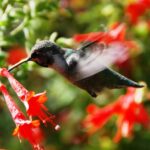