To have healthy plants, it is important to know the do’s and don’ts in handling them. One way to optimum productivity of your plants is through mulching.

Mulch is a layer of material applied to the surface of the soil.

Reasons for applying mulch include conservation of soil moisture, improving fertility and health of the soil, reducing weed growth, and enhancing the visual appeal of the area.

Knowing how and where to apply mulch to your soils is very important. So, can I mix Mulch with potting soil? Want to get an answer to this? Then keep reading!

Can I Mix Mulch With Potting Soil?

Yes, mulch can be mixed with potting soil.

This helps to increase the soil’s organic matter. Mulch helps to keep the soil moist and cool, this provides nutrients for plants, and it also helps to control weed growth.

When growing plants, however, it’s best to use bark mulch mixed with the potting soil. It’s important to avoid growing plants in wood mulch.

Thick levels of mulch have been observed to suffocate plant roots. This is because plants, like humans, require air to survive.

However, they wilt when their root systems are covered beneath large levels of mulch, which reduces the amount of air in the soil.

This article contains vital information about mulch and its benefits to soils. Keep reading!

How Is It Done And What Are The Benefits?

Told you mixing mulch to potting soil is super easy. There are, however, some precautions to consider when doing so. Let’s go over some crucial safety precautions to take;

Having discussed the steps of mixing mulch with potting soil, it’s time to reveal the benefits of mulch to potting soil. Let’s dive right in!

The combination of mulch and potting soil ensures that microorganisms and bacteria produce compost that is high in organic matter.

This results in healthier plants that are more resistant to disease. It also provides a much better environment for the soil’s natural population of beneficial flora and fauna.

2. It reduces soil compaction and erosion

Mulch is composed of elements that protect the soil against water and wind erosion.

The mixture of mulch and potting soil can help to increase soil drainage. When microorganisms and bacteria break down the mulch, they produce compost.

This will also provide a much better environment for the soil’s natural population of beneficial flora, such as earthworms and insects.

When these organisms move through the soil, they help to create air spaces and increase drainage.

4. It regulates the temperature of the soil

This is one amazing benefit of mulch to soils. The temperature level of soil can improve the overall growth and health of your plant.

Since mulching protects the soil surface, it helps to keep the soil temperature stable.

A healthy soil has been well-nourished. Mulch enriches the soil with nutrients, which in turn nourishes the plants, making them healthier and stronger.

Mulch, in general, is very beneficial to soil, even when it’s old. Mulch slowly decomposes, releasing valuable minerals and organic materials into the soil.

Can You Mix Bark With Potting Soil?

Pine bark is often used in the potting mix but bark chips can also be used. It has a way of preventing the mix from sinking when it is wet.

Some of the benefits of mixing bark with potting soil include;

When it comes to mixing barks and potting soil, you can use any ratio you choose depending on how much air your roots need.

The same goes for mulch.

Too much mulch on the soil might be harmful to the plants. It reduces air circulation, which can lead to inadequate soil aeration and even plant death.

Adding roughly 20% – 30% bark to potting soil is a good strategy to cut costs and extend the life of the soil.

What Is The Best Mulch To Mix With Soil?

There are two types of mulch which are; Organic and Inorganic mulch.

Organic mulch is a perfect mix with soil. Organic mulches are mulches that will break down over time which will increase soil fertility and boost the growth of your plants.

Inorganic mulch on the other hand are mulches that are synthetically made such as rubber mulch, stone mulch (aka rock mulch), and landscaping fabric.

These mulches do not break down over time and even if they do, the chemicals contained in the mulch can harm plants when released into the soil.

Not to mention, the chemicals can get their way into the fruits or vegetables and your plate. This is why you should only consider mixing organic mulches into the soil.

Knowing what type of mulch you have is a good start in preventing any unwanted events.

Can You Put Mulch In Potted Plants?

Adding a layer of mulch to any potted plant can be a simple and easy way to make plants look much better and to help keep them healthy.

Mulching can also be a great way to conserve soil moisture and encourage new healthy growth in plants with wilting stems.

Similar to how mulch is important for outdoor plants, indoor potted plants can also benefit from a layer of mulch.

Certain types of mulch, such as those made from materials like sawdust, pine needles, and grass clippings offer amazing benefits to plants. Some benefits include;

Can I Mix Mulch With Garden Soil?

No, Mulch cannot be mixed with garden soil, this is because garden soils are inorganic. Mulches don’t do well with inorganic soils.

These mulches do not break down in inorganic soils and even if they do, the chemicals contained in the mulch can hurt plants when released into the soil.

Mixing mulch with potting soil is a very welcomed process, it has no side effects whatsoever.

However, it’s important to note that mulching has to be exclusively organic, this explains that it’s okay to mix mulch with potting soil.

With that being said, it is clear that mulch shouldn’t be mixed with garden soil.

Because it is an inorganic soil, the chemicals in the mulch might be harmful to plants if they are released into the soil. 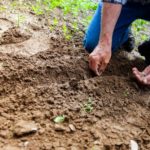