There are a lot of scissors designs used all over the world from multipurpose scissors to fabric scissors, surgical, crafts, and gardening scissors.

A lot of gardeners have asked me from time to time if they can use their scissors in place of the shears.

Even though it might sound funny, the answer is yes, you can use scissors in place of the pruning shears.

However, you have to put it in mind that pruning shears and scissors were designed for different uses.

As such, you would not be able to use the scissors for some heavy-duty gardening activities.

I will be explaining further in this article how to use your scissors for pruning and the advantages of both scissors and garden shears for pruning.

Can I Use Scissors Instead Of Pruning Shears?

Multi-purpose scissors are cutting devices that are commonly found in most homes.

These kinds of scissors which are designed for general use usually have blades that are less than six inches long and same-sized handles which are held together with a narrow fastener.

With multipurpose scissors, the handles work in such a way that you can only use your thumb and another finger for cutting.

Even though your regular scissors at home are not designed for gardening and pruning activities, you can use them if they are sharp enough.

Scissors cannot be used for heavy-duty work such as cutting thick branches.

However, they can be used for trimming plants especially houseplants  and cutting dead and overgrown leaves.

Scissors are especially useful when you plan on making delicate snips and you will be able to make your cuts without actually damaging the plant.

Before using general scissors for cutting activities, ensure you have sharpened them with a sharpening device.

If their blades are dulled, the cuts will damage the plant and they can get infected.

Can I Use Scissors To Prune?

You can use general scissors to prune in place of pruning shears.

Although they will not be able to carry out heavy duty work, you can have them on hand for small simple tasks such as trimmings.

If you have a lot of houseplants then having general purpose scissors handy will be useful as they have soft stems which the scissors can cut through.

If you have to do major cutting and hacking however, your best bet is still pruning shears.

The scissors can easily break under the pressure as they are not designed to withstand such pressure.

Remember that your scissors blades are pointed unlike those of the shears and might easily damage your plant leaves.

Take note of this while cutting and you should have a well-done job at the end of the day.

What’s The Difference Between Pruning Shears And Scissors?

Pruning shears and scissors are both tools you can use for pruning activities in your garden.

They are however designed for different uses.

General purpose scissors can be used for a variety of household activities such as cutting fabrics, paper, parcels and other things.

They can also be used in the garden for some simple activities such as pruning and trimming of small plants and stems.

The scissors have sharply edged blades which are usually between 6 to 7 inches in length.

It also has equal sized handles which you can insert your thumbs and one finger to apply pressure while cutting.

Pruning shears on the other hand are specifically designed for pruning activities in the garden.

This includes trimming plants, controlling overgrowth, making garden arrangements such as topiaries and hedges to mention a few.

They are stronger than scissors and will not break or come apart under heavy duty work.

Pruning shears typically have long handles which you can grip with your two hands and this helps when cutting thick branches.

The blade length and description depends on the type of pruning shears being used.

There are typically 3 types which are the anvil pruner, bypass pruner and the parrot beak.

The type of pruning shears you choose should depend on the kind of work you plan to do as each is best used for different cutting activities due to the nature of the blade.

Remember that both pruning shears and scissors are good for different activities and you should put this in mind when gardening.

What Are The Advantages Of Using Scissors Over Pruning Shears?

As funny as it sounds there are several advantages to using scissors for pruning over pruning shears. I will endeavor to explain them briefly:

Scissors are perfect for delicate cuttings on small plants. Bigger pruning shares are usually too cumbersome for this activity.

The scissors are able to make clean sharp cuts and leave your plants healthier in the long run.

Most pruning shears have large and heavy blades which might not be able to work into crowded gardens.

Scissors with their shorter blades are able to get into hard to reach places for the trimmings and snips you need to carry out on your plants.

Most pruning shears are heavy on the hand as you have to grip with both hands for long periods of that.

This usually leaves pain for those with joint conditions such as arthritis. However with scissors, you can easily work with your thumb and a finger and cut cut away.

General purpose scissors can be found in almost any convenience store around you. They are affordable and easy to come across.

You get your pick of types, lengths of blades and even price. To buy a pruning shear, you might have to go to a gardening store or order online.

A major advantage of the general purpose scissors is that apart from gardening activities, you can also use them for other quick cuttings in and around the house.

Unlike pruning shears which can only be used in the garden, scissors can be useful for a variety of other purposes.

What Are The Advantages Of Using Pruning Shears?

Pruning shears are very important in the course of gardening.

With pruning shears you can be able to make clean and precise cuts on your plants without damaging the plants.

They are also quite good for heavy duty work such as trimming plant branches.

Also, with your pruning shears you can safely trim thorny plants without fear of injury.

Curved blades on many pruning shears are useful for keeping the plant in one spot when you are cutting.

They are ideal for very large plants. Pruning shears with straight blades are also  great for getting into tight spaces.

Pruning shears are great for taking clippings from larger or more difficult plants and cacti.

Their sharp blades and versatility makes chopping through stalks and stems easy.

What Is The Best Pruning Scissors To Buy?

There are a variety of pruning shears and scissors out there in the market. They all have their inherent advantages.

In a poll culled from several gardening experts around the world on gardening tools, they gave their recommendations and opinions on a variety of these tools.

The Felco F2 Classic Bypass Handpruner was generally recommended as the overall best pruner for clean and quick clippings while gardening.

The product was given as an industry standard by almost all the gardening experts.

The top reason for using this product is its durability and comfortability. Get yourself a F2 hand pruner today for easier and gardening work.

Using regular scissors for pruning activities is not something which is well known by most gardeners.

Most do not consider it as a gardening tool, however it is an easy option for you to use for simple delicate cuttings especially if you don’t have other tools at hand.

Scissors can work for small gardening activities but cannot handle heavy duty work. It also has some advantages over the regular pruning shears.

Before using scissors to prune, ensure they are well sharpened or you might end up with damaged plants.

You should always have a well sharpened scissors handy while gardening. 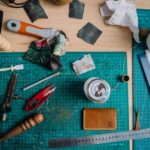