Penguins, like all other birds, lay eggs and have to incubate their eggs for a certain period of time before they hatch.

Penguins are sexual in nature i.e they require the transfer of sperm from the male to the female to produce fertilized eggs.

Male penguins do not lay eggs, they mate with the female who then lays one or two eggs which later hatches into a chick.

Although male penguins might not be able to lay eggs, they are one of the best fathers on the planet.

We will delve into the world of penguin reproduction, how the males share in the parenting duties and how penguins care for their eggs generally.

The process of egg laying starts during the breeding season when the female has to get a good fat male who will watch and warm the egg while she is away to see foraging.

After selecting a male, the pair gets bonded.

They then go ahead to mate: to successfully mate, the female lies down on the ground, while the male climbs on her back and walks backward till their cloacas align.

This way, sperm is transferred and egg laying can begin.

There are about 18 species of penguins all over the world, the emperor and king species only lay one egg at a time while other species can lay two eggs at a time.

Related: Here is an article I wrote on can penguins see in the dark

There has been no record of a male penguin laying eggs. The males have to mate with the females and transfer sperm for reproduction to occur.

The females predominantly lay the eggs, however both parents share incubating duties and the care of the child.

Male penguins are usually less in number than the females so the females have to compete for the males while also trying to get the best male who will make a good dad for her chicks.

Male penguins carry and warm eggs when it is laid up until the period the chick hatches.

Most penguin species with the exception of the emperor penguin share incubation duties amongst both parents.

They take turns warming the egg while the other goes out to feed and forage.

The males take the first turn after the female lays the egg and they warm the egg by carefully balancing it on their feet and covering them with their brood pouch.

This serves to protect the egg from the harsh weather conditions giving the right temperature for the egg to mature and hatch.

For emperor penguins however, once the female lays the egg, she transfers the egg to the male and goes out to sea for the duration of the incubation period.

The male remains within the colony sharing heat with his fellow soon-would-be-daddies and relying on his fat reserves to keep the egg safe till the return of the mother.

This species more than others looks out for fat males as the male has to go fasting throughout the incubation period which can last as long as 2 to 3 months.

They can lose up to 45% or more of their body weight during the incubation period.

Can Penguins Lay Eggs Without Mating?

A penguin female requires a mating ritual to be able to lay a fertilized egg. Mating and pair bonding is very important in the penguin life cycle.

Both parents are required for the periods of incubation and care of the hatched chick.

For most species, the parents share the incubation duties with each taking turns to watch the egg and going out to feed.

On the other hand, the emperor penguin species eggs are incubated entirely by the father while the female goes out to see.

Penguin reproduction is sexual in nature, however there have been reports where a female laid an egg without mating occurring..

The eggs even though they were incubated by the parents did not develop to produce hatchlings.

They were most often abandoned by their parents or got spoiled.

What Happens If A Male Penguin Drops The Egg?

For the emperor penguin species who lay eggs during the winter season, dropping an egg can be extremely dire for the egg.

Once the egg is laid, the mother transfers it to the feet of the father, who balances it carefully while also covering it to keep it warm.

During the transfer of eggs, it is possible for the couple to accidentally drop the egg if they are not careful.

Also, if for one reason or the other the father drops the egg it could be a problem.

Emperor penguins nest on ice and apart from the fall damaging the egg shell, the ice will quickly freeze the egg and any hope of hatching the egg is lost.

Males who also cannot endure their fast are known to abandon the egg and walk away. This can happen when hunger overcomes their paternal instincts.

Why Do Male Penguins Look After The Eggs?

For almost all species of penguins, the father and the mother incubate the egg.

One parent stays with the egg while the other goes out to feed and they take turns alternating that way till the egg is hatched.

For emperor penguins however, it is solely the responsibility of the father to incubate and look after the baby once the mother has laid the egg.

The reason for this is quite simple, male penguins have stored reserves of fat and that is why during the mating period, the females look out for the fat guys.

The father is expected to keep the egg warm and safe in the arctic winter where temperatures drop as low as -40 degrees Celsius.

The father relies on his stored reserves of fat to get him through 2 to 3 months until the mother returns, he has to be on a fast and will huddle with his fellow male penguins to keep warm throughout the cold winter.

How Do Penguins Take Care Of Their Eggs?

Some penguin species build nests or return to their previous nests once it’s breeding season.

The Gentoo penguin for example builds nests called scrapes which involves a simple structure of rocks lined through with feathers and vegetation.

The Temperate and Little penguins make burrows in the soil while other species can make their nests under scrubs, in caves or in rock crevices.

These nest structures are ways to keep their eggs safe and warm.

The Emperor and King penguins do not build nests but keep their eggs warm and safe from the elements but balancing it on the males feet and covering it with feathers called the brood pouch.

They form rookeries where the males all stay huddled to remain warm throughout the cold winter.

Once the eggs are laid, both parents take turns incubating it while the other goes out to feed.

This goes on till the egg is hatched and the parents continue to care for it till it becomes a full fledged juvenile.

How Many Eggs Do Penguins Lay?

Most species of penguins with the exception of the king and emperor penguins lay two eggs at once.

The Adelie penguin, Chinstrap penguin, Rockhoppers and Little blue penguin are all examples of penguin species that lay two eggs at once.

The Emperor and King penguins however only lay one egg at a time and this is due to their peculiar and similar nesting habits.

For the emperor penguin, they breed during the harsh winters of the Antarctic region.

They do not build nests but form colonies with thousands of males balancing eggs on their feet and huddling together to stay warm.

It is a big job to look after one egg, and as such they only produce one at a time.

The King penguins also breed during the winter while the males take care of the eggs by warming it on their feet.

Penguins lay fertilized eggs which hatch into chicks after a period of incubation.

Male penguins do not lay eggs however they share in the incubation and chick raising process.

For the Emperor and King penguins, it is the sole responsibility of the father to care for the egg once the mother lays the egg.

The male is chosen for this duty because of their reserves of fat which helps them get through about 2 months of fasting in the harsh Antarctic winter. 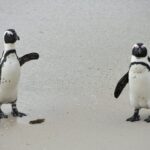 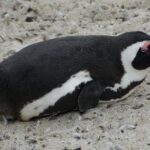