Penguins are excellent swimmers. They can spend a long period underneath the water.

These birds are found primarily in the Southern Hemisphere. Some, however, live on the Antarctic coast and sub-Antarctic islands.

It’s no surprise that most people want to know if penguins can freeze to death. Well, if this is your question, let’s find out.

Can Penguins Freeze To Death?

Adult penguins do not freeze to death. These birds have intrinsic abilities that help them survive the cold.

Regardless, they can get very cold sometimes.

Baby penguins, on the other hand, are prone to becoming wet. This is usually caused by rain. And, it can lead to them freezing.

According to research, these chicks are prone to freezing to death in temperatures below zero.

Continue reading to learn amazing facts about how penguins deal with chilly weather.

How Cold Can A Penguin Survive?

Penguins can maintain a body temperature roughly around 38°C.

These birds live in temperatures ranging from 90°F along the coast of Patagonia to -76°F on the sea ice of Antarctica.

According to research, excessive cold weather conditions might put these water-loving birds under undue stress.

Surprisingly, Emperor penguins are resistant to frigid temperatures. They are cold-proof, hence, they can withstand temperatures as low as -94°F.

Have you ever walked on ice? Well, we can all attest to the possibility of our feet freezing over.

However, not for penguins. Penguins have the unique ability to control the flow of blood to their feet.

In addition, they also have a blood vessel system that reduces heat loss from their body.

Both of these aid in keeping their feet a few degrees above freezing. This also prevents them from sticking to the ice.

Related: Here is an article I wrote on can penguins drink saltwater

Are Penguins Freezing To Death?

Yes, they are. According to the research of the previous 50 years, the average air temperature in the Antarctic Peninsula has risen by roughly 3°C.

That means temperatures have risen five times faster than the average rate of global warming.

Thousands of newly-born penguins are freezing to death in Antarctica as a result of increased rainfall.

Chicks are unable to tolerate the extremely harsh weather. Because they have downy feathers, getting wet in the rain can be fatal to them.

And, they can easily freeze to death if they become wet.

This is why persistent rain can cause chicks to freeze to death.

Scientists have discovered that the number of Adelia penguins may have decreased by 80%.

Sadly, it’s probable that this species will become extinct in the next ten years.

Do Penguins Need Cold To Survive?

Penguins do not necessarily require the cold to survive. This is because not all penguins live in cold regions.

Some species of penguins thrive in a warm climate. While other species tend to thrive in cold-water habitats.

Species such as Galapagos penguins do well in tropical islands at the equator. However, Emperor penguins reside in Antarctica.

Penguins often seek out habitats with fewer competitors. Penguins live in the waters and on the shore.

They are more common in locations with nutrient-rich water. Penguins eat a variety of foods, including krill, squids, and fish.

They also favor islands and far-flung continents. This is mostly to keep terrestrial predators at bay. Because they can’t fly, they are easy prey.

Penguins are not cold-blooded animals. They are warm-blooded birds that live mainly in Antarctica.

They are primarily protected from the cold by their thick layers of blubber. Penguins puff out their feathers to trap more air for insulation when it gets cold.

Why Do Penguins Huddle Together?

Huddling simply means to crowd together in a group or to keep your arms and legs close to your body, usually due to cold.

Huddling is a type of social thermoregulation. Penguins have been observed huddling together to conserve heat.

Huddling is also used by penguins when temperatures drop and winds pick up.

Penguins snuggle close to keep warm to protect their bodies from the full force of Antarctica’s frigid weather.

A group of ten penguins or more can cluster together.

They often switch positions, such that every colony member takes turns forming an outer shield.

When the wind is at its strongest, it affects the colony on the outskirts.

The Emperor penguin is reported to do this more frequently. They do this to survive adverse weather conditions in Antarctica.

Juvenile penguins have been observed huddling together to sleep better. According to research, penguin huddles can last an average of 12 minutes to several hours.

Surprisingly, a penguin cuddle can breakup abruptly. One penguin in the middle of the colony could be the reason for the breakup.

This can be induced by overheating or a sense of being suffocated. However, the cause for the breakup is still unknown.

How Do Penguins Adapt To Their Environment?

Penguins are nature’s greatest survivors. They have a body structured to adapt to their environments.

Let’s take a look at some of their adaptive features.

Penguins such as Emperor, Adelie, Chinstrap, and Gentoo penguins reside in Antarctica.

They have a thick covering of blubber on their bodies. Blubbers are a layer of fat beneath their skin.

They have tightly packed oily outer feathers that overlap to seal in warmth. This allows them to survive the cold temperatures of Antarctica. They also cuddle together for comfort on windy and cold evenings.

There are 18 different penguin species in the world.

These birds differ in shape and size. However, a majority of them have black bodies and white bellies.

They can hide from predators such as leopard seals and orcas thanks to this protective countershading. Despite their inability to fly, penguins are exceptional swimmers.

Penguins have an awful sense of taste. They can only taste salty and sour flavors. This helps them distinguish between fresh and decaying fish.

Since most penguins live in saltwater, it is normal for them to consume this type of water.

Penguins, however, have a gland beneath their eyes that aids in the removal of excess salt from their body.

Penguins have bodies that are specifically designed for swimming. They have flippers that act as propellers beneath the water. This allows them to move forward.

These flippers also increase speed beneath the sea. The movement of these flippers is similar to that of a soaring bird’s wings. As a result, it is acceptable to say that penguins fly across the water.

As previously noted, penguins have densely packed oily feathers. Water flows gently over their bodies thanks to the oil in their feathers.

Penguins do possess some swimming tricks as well. Penguins porpoise when they approach a dangerous zone in the water.

Proposing increases a penguin’s swimming speed to 12km/hr, and it causes them to jump out of the water occasionally.

Porpoising allows penguins to keep breathing while maintaining velocity. This unique versatility aids them in avoiding predators. Most of the time, it confuses their predators.

Can Penguins Survive In Heat?

Some penguins live in warm climates, such as the Galapagos Islands, where the average temperature is 75 degrees Fahrenheit.

According to research, there are more penguins in warmer climates than in colder climates.

These penguins have layers of fat as thick as penguins that live in cold climates.

They are also not equipped to walk on snow or ice since they can develop frostbite. They are also unable to spend long periods underwater.

These penguins have feathers that are lightly braided and are best suited for warm climates.

Penguins that dwell in frigid climates, such as Emperor penguins and other penguins, can scarcely survive in hot weather.

Warm weather can lead to overheating in their fat layers.

Chicks are at risk of overheating since they are exposed to a hot temperature. Penguin chicks are shielded from the light by their parents.

They are also unable to thermoregulate. The newborns rely on their huge feet to operate as radiators.

According to research, on very hot days, juveniles penguins have been spotted lying like a starfish on the ground to expose their feet.

This is because they possess certain adaptive features which enable them to survive the extremely harsh environment.

However, not all species thrive in cold climatic religions. Some species of penguins inhibit in warmer climatic regions.

According to research, most Antarctic penguins lose their chicks to freezing because of heavy rainfall. 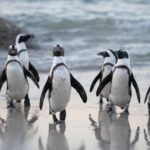 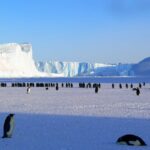