Penguins are quite the notable animals for their funny looks, warbling walk and the fact that a large number of the species are polar animals.

Humans have observed penguins over the years and the vocalizations of these birds have been recorded.

Penguins are noisy birds and emit a lot of vocalizations, however penguins can and do not quack.

One of the sounds usually attributed to penguins is the ‘old car failing to start’ sound. Penguins can even bray like donkeys.

In this article, we will discuss penguin complex vocalizations, how they communicate and whether they use sounds to attract their mates.

Penguins do not quack as that sound is particularly associated with ducks.

Penguins make different sounds and calls as they are quite the social birds and communicate a lot.

The popular ‘quack quack’ sound is one made by ducks, especially the female mallards.

However, this is not the only sound they make.

Penguins make sounds for different reasons such as calling out to their mates, antagonistic or aggressive sounds, and mating sounds.

These sounds help to show different emotions such as anger, displeasure and also finding lost chicks.

Penguin sounds include honking, braying, hoarse squawks and trills amidst a host of other vocalizations.

Related: Here is an article I wrote on can male penguins lay eggs

What Sound Does A Penguin Make?

The main sound made by penguins has been described as a honking or braying sound. This is not the only sound in the penguin’s repertoire, however.

The honking sounds are likened to a goose honking but quite louder and depending on the penguin can last for quite some time.

When disputing territories male penguins such as the Adele penguin, makes a ‘gakker sound’.

This is a low-pitched call used to indicate maleness and ward others off the territory. They growl threateningly in a low-pitched voice when they feel danger or any sort of attack.

Baby penguins have been recorded to make a ‘peep peep’ sound and this is quite common among baby birds.

For the penguins though, the most common sound observed by humans has been described as ‘old car failing to start’.

A trill is a repetitive, short and high-pitched song made by birds.

Several bird species such as the kestrel, woodpecker, nuthatch and swallow are famous for their trilling sounds.

Add penguins to that list as penguins also trill.

Penguin males trill whenever it’s breeding season and it’s time to find a mate. They try to impress the females with raucous squawks and trills.

The sounds are very important as it reveals whether the male would make a great dad or not.

For the penguin female a major feature to look out for is the weight of her prospective mate.

Fat male penguins are usually preferred over slimmer ones as they are believed to have more food reserves to last during the incubation of eggs.

As such, the sounds made by the fatter penguins are different from those of their slimmer counterparts and the female considers this before picking a mate.

Also, after some days or weeks away searching for food, penguin pairs usually give off staccato trills to welcome each other home.

These sounds are recognized by the pair and each would only respond to the song of the other mate.

What Does It Mean When Penguins Make Noise?

When penguins are on land, they are observed to be quite the noisy birds and this due to the different communications they make amongst each other.

Also penguins vocalizations are unlike those of other birds.

They have an organ called the syrinx which enables them to produce honking and braying sounds quite unlike other birds.

Each penguin has its own unique sound easily recognizable by other penguins, especially its close relations such as parent to child or mate to mate.

The noisy sounds vocalized by penguins can mean either of the following:

What Sounds Do Baby Penguins Make?

Baby penguins are known as chicks and usually spend the first year of their life being carefully cared for by their parents.

For penguins, both the father and the mother incubate the egg by balancing the egg on the warm soles of their feet and covering it with a pooch.

Once the chick is about to hatch, it breaks off the top of the shell with a pip sound and can spend the next three days trying to leave the shell completely.

Penguin chicks make the ‘peep peep’ sound till they become juveniles and their strix becomes developed enough to produce their unique sound.

Penguin chicks are usually very fragile and need to be carefully monitored by their parents for survival.

What Sound Does An Emperor Penguin Make?

Emperor penguins are a penguin species predominant to the Antarctic.

It is also special because it is the tallest among the penguin species and specifically almost the heaviest.

The emperor penguin has adapted to harsh and cold weather conditions in the Antarctic island.

The emperor penguin is also the only penguin species to make use of a ‘two-voice system’ when communicating.

This phenomenon has been observed in other bird species such as the songbird and brown thrasher.

The emperor penguin also uses this system and this helps them to pinpoint their close familial members easily according to new research.

The two voice system adopted by the emperor penguin refers to the ability of birds to produce two sounds, either at once or simultaneously, from their vocal organ, the syrinx.

Emperor penguins use this system to recognize each other, communicate with mates and chicks and also to demand for food.

Do Penguins Use Sounds To Communicate?

During its breeding season, penguins spend their time on land near the water and there is usually a colony consisting of ten of thousands of birds all living together.

It can be quite difficult to differentiate penguins by sight as they almost often look the same.

As such it is important for these penguins to communicate to recognize each other.

Even though penguins are sociable birds, they prefer to relate with their mates and their chicks.

The penguins have developed vocalizations for various reasons such as recognizing a colony member, warning against attacks and most importantly for courtship displays and familial recognition.

If a penguin mother goes out to sea and comes back on land after some days it might be difficult to find her family and her chicks.

However with the unique sound each penguin has, a chick can hear its parent calling from a kilometer away.

Do Penguins Attract Their Mate With Sounds

Male penguins very much try to attract their mate with sounds. In the penguin world, the sound made by the male during the courtship ritual signifies to the female whether she’s listening to a fat male or not.

The weight of the prospective dad is important as during incubation, he would have to stay for a period of time ranging from days to weeks without food.

During this period, the mother is away to gather food supplies for the unborn chick to eat when it is hatched.

A fat male would easily survive as he can rely on his fat reserves to get him through the period without having to go foraging for food frequently.

This according to penguin behavior makes a great dad.

The inflections in sound made by a fat male and are different from those of a slimmer male.

The females therefore are always keen to pick out the females.

It is also not easy to rely on sight as part of the courtship display is to puff up and fluff their feathers to look bigger by the males.

We have learnt that apart from their looks, penguins differ from other ways one of which is their sounds and vocalizations.

Penguins do not quack like ducks however they make other vocalizations such as braying, a honk, ‘old car failing to start’ and a two-voice system utilized by the emperor penguin.

Vocalization is important in the penguin kingdom and each penguin has been discovered to have its  own unique sound which helps others to easily recognize it.

Penguins use these vocalizations to attract mates, recognize a long gone partner, find a missing chick and even warn colony members of predator presence. 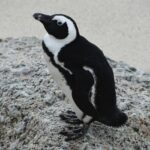 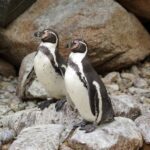