Speaking in the more technical term, Penguins do not “walk” they “waddle”. This is why when you see them “walk” it is side to side.

Penguins are fascinating creatures and they have a lot of unique qualities that we are going to explore some of them in this piece.

At the end of this article, you are going to know how Penguins walk, if they have legs, how they move around if they fall backward and a host of other fascinating things about Penguins.

Penguins do not generally walk backward, it is not a skill that comes easy to them as even moving around can be quite difficult for a Penguin.

However, when the situation requires it you will see Penguins walking backwards.

Penguins tend to walk backwards when they are frightened, startled, or need to escape from a place in a hurry.

Since Penguins do not normally walk backward they easily fall when they walk or waddle backward, this is because of the size of their bodies.

The flightless nature of penguins and their evolution has primed them to be better at swimming than any form of movement.

The feet of penguins are not long, they are very heavy so there is a lot of difficulty in balancing their bodies.

To walk backwards they would need to lift their legs and this is quite difficult for penguins to do.

A major reason why penguins generally don’t walk well or backwards is that they have small feet and short legs.

Typically birds are more akin to flying and swimming than they are to walking.

Related: Here is an article I wrote on why do penguins waddle

How Does a Penguin Move Around?

Penguins move around in different ways on land and in water. We are going to discuss them separately.

In fact, Penguins do not fly at all. However, some people regard the way Penguins swim or move in water as “flying” in water.

Penguins are not very proficient with walking on land, Their members are not adapted to make them efficiently walk or move on land.  on land they have about four types of movements which are:

As you can see from the list above Penguins do not really walk, or at least walking is not the right term to use.

Whenever Penguins move on land you can always see their body angled or leaning forward.

When embarking on long journeys there’s a species of Penguins that toboggan, there are polar penguins.

This helps them travel faster because they can easily slide great distances on ice while on their bellies using their feet to push forward and navigate.

Their feet are also webbed, Which is an adaptive feature that makes them great swimmers.

They have very sharp and strong claws that are effective for gripping and hanging onto ice surfaces.

It has been observed that because of how short their legs are and how massive their feet are it is more efficient for them to move by waddling as opposed to walking.

Waddling has more advantages than walking because it helps reduce the rate at which they lose heat, increase the center of their mass and help them conserve more energy while they move.

It is obvious that these parts and other parts of their body evolved to help them acclimate to spending most of their time in the water.

All this is not to say that they can not Move on land, it is just for you to know that they are not effective at moving on land.

There are some species of Penguins that hop instead of walking or waddling such as the rockhopper.

It has been observed that Penguins can intelligently use their beaks when climbing cliffs as a kind of ice pick for rock climbing, this helps them climb cliffs better.

When species of penguins like Adelie or Emperor penguin want to get down from hills they would toboggan; slide on their bellies, while doing this they use their feet to propel themselves and use their flippers to guide themselves.

They can’t do this on every hill though, the hill would have to be padded by soft snow.

Water is where penguins are most comfortable. They move more majestically and gracefully in water than anywhere else.

You can easily see penguins diving into water or swimming in it.

This doesn’t mean they spend all their time in water because they cannot nest in water, penguins nest on land so you see them in massive colonies waddling to find a safe nesting area.

The bottom line is Penguins are better in water than they are on land.

Penguins have adapted and evolved to be more aquatic birds than land or flying birds.

They are flightless birds but when They swim they are so efficient that you could say that day fly in water.

Their feathers insulate them from the cold and their feet make them swim very fast.

Do Penguins Have Legs?

Yes, Penguins have legs.  Their legs are composed of Most of the parts that the legs of humans have.

There is the myth that when planes fly over Penguins the Penguins look up and fall backward and people would have to go turn them over or they would Die.

This is not the case.

Can a Penguin Swim Backward?

Penguins are proficient swimmers, however, it is not known if they swim backward or not.

It is safe to assume that since they are such renowned swimmers they could swim backward but no study has been conducted to prove or disprove this.

Are there any birds that walk backwards?

Yes, there are birds that can walk backwards they include.

This doesn’t mean that the above-mentioned birds. Walk backward every time or they are proficient that walking backwards.

Just note that birds do not walk backward Willy nilly, However, they can do it when the need arises or when they are trained to do so.

We have explored how Penguins move and things that are related to the movement of Penguins on land and in water.

At this point in this article, you should Easily understand Things related to the movement of Penguins in water and on land. 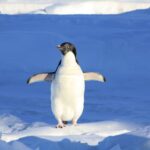