Birds can be cruel to one another, resulting in catastrophic injuries. However, to build a social hierarchy, it is sometimes necessary to battle.

The key is to know when to intervene, as well as knowing when to let them alone.

To establish their pecking order, quail engage in combat. When bullies and fighting partners persist in being aggressive, you should interfere and separate them.

The easiest method to prevent quail fights is to give plenty of room, hiding spots, and a proper male-to-female ratio for your flock.

Now let’s look at why quail fight, when to interfere, and how to separate them effectively.

Why do quails attack each other?

Quail fights for a variety of reasons. Sometimes it’s a matter of asserting one’s power over others.

Young males fight viciously. Their hormones make them more or less insane, and if they are not separated, they will kill each other.

Males, in particular, will try to establish their territory and gain access to females during this time.

Fights to create a pecking order are, as previously stated, natural and expected. A fight will ensue if there is not enough room or if there are too few females per male.

It is also possible for roos to be aggressive towards the hens. Because of this, they will strive to get together numerous times per day.

Hens must be held down by their feathers when they are being mated.

Too many matings of the same female can harm the females if the room has a low number of females, to begin with.

That’s not to say that it doesn’t happen in larger flocks, either. As a result, one or more of your chickens will be devoid of feathers on their heads or backs.

Females do occasionally fight, just not as frequently.

Related: Here is an article I wrote on using quails poop as a fertilizer

How many quail can be kept together?

Starting with quails, even in a tiny backyard, they are rather straightforward to grow. If you want to raise at least three (but ideally five or six) of them together, consider doing so.

Males and females in a flock should be evenly distributed, with a male with four or five females being the ideal ratio.

How do you stop quails from fighting?

Fighting is serious business when quail are involved. As quail create and maintain their pecking order, it’s not unusual for them to chase each other a little.

But if two males continue to fight or if one quail (roo or hen) continues to chase another, then we have a problem on our hands.

This will result in serious injuries and, in some cases, death.

Quails that are injured are more vulnerable to assaults by other quail flock members, especially if they are bleeding profusely.

In the end, this will lead to misery and possibly death.

Quail fights can be stopped by intervening.

Injury increases the danger of being attacked by other members of the flock, even if the assailant has been removed.

Consider obtaining a vet or culling an injured quail if it is plainly in pain.

Consider spending a few hours observing their interactions if you’re not clear who’s assaulting whom.

You’ll rapidly learn who’s aggressive, and you’ll be able to separate them based on that information.

Do quails kill their babies?

Similarly to chickens, quail eat egg yolks because they need extra protein in their diet.

As soon as they begin to consume their eggs, it gets ingrained in their minds.

Can you keep all male quail together?

Males quails are much calmer compared to cockerels but will fight if kept together, so any surplus is best fattened for the table.

Why do female quails fight?

Females fight on occasion, although not as regularly as males.

This isn’t to say they don’t cause harm to one another.

They are capable of being just as cruel. Only, they don’t fight very often.

A hen would rather harass and pick on a weaker one.

It’s not uncommon for a group of hens to work together to catch a single prey.

The most typical source of female aggression is when an aggressive hen picks on a single victim or the entire flock.

How do you stop quails from pecking each other?

Despite the fact that fighting might be triggered by a rooster or when being overly aggressive, it is often a sign that something is amiss in the flock as a whole.

A couple of square feet per quail is recommended when you have more than one in the same run.

Ascertain that the flock composition is correct. As many girls as men, preferably seven-to-one.

Quails can definitely kill each other, so to avoid this you want to ensure that they are well spaced. 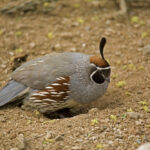 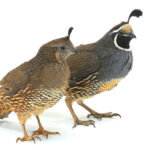