Horses have undergone domestication, so it is understandable to ride them, but zebras, on the other hand, are the most challenging animal to domesticate;

No. The back of a Zebra is not that evolved to allow it to be ridden by humans, let alone saddle or carry cargo. If you insist on hanging a Zebra, you will end up causing the animal pain.

Forcing a Zebra to behave like a horse is very risky, you should not attempt to ride a zebra-like you would like a horse.

A Zebra can never be a riding buddy for you, and you will be putting your life at risk when you attempt to ride a zebra; even a zebra in a zoo is still not suitable to be ridden.

Zebras, donkeys, and horses all belong to one family, but this doesn’t mean that zebras can do all the things horses are known to do;

Humans can’t ride Zebras because they are aggressive and temperamental, with a touch of them being dangerous.

Zebras are not for the faint-hearted or any other average person; even those that are skilled in equestrian duties have found it challenging to work, let alone riding it.

Immediately they feel a little threatened, they would kick and bite with a ferocious intensity, they are too much work, and after all the stress, you still won’t be able to break down their spirit, so all the work will be in vain.

Zebras are hell-bent on not changing their personalities for whatever reason, they won’t be tamed, and they won’t change their habitats.

They become aggressive when you try to mold them into what they naturally are not; hence they are impossible to ride by humans because they are fierce, bold, and not docile enough to be ridden.

Can Zebras be Domesticated?

No. And this is as a result of zebras considering humans as predators and have long developed the instincts and reflexes to survive any form of attack from them or any other predators, for that matter

Zebras find it difficult to trust humans; they would instead take flight or fight before even thinking of being domesticated.

Not for lack of trying, humans have done everything possible to domesticate these beautiful beasts, but it was all in vain; zebras do not fit into any domestication plans set by humans; the animals are nomadic and would rather stay in the wild than be put into territories.

For zebras to be domesticated, they will need to have a calm nature that leads you to believe that they will not turn around to bite you when you feed them or take care of them.

Zebras, on the other hand, are very far from being calm; trying to soothe them to be quiet will, in turn, only make things worse; they are distrustful, so trying to domesticate them will only be a colossal waste of your time.

Zebras do not live in family groups and have no social structure or hierarchy; seeing zebras moving in groups doesn’t mean they are in the family hierarchy; they sometimes move together to survive. In the wild, every Zebra is on its own.

Here is an article I wrote on what sound does a zebra make?

Can you Train a Zebra to be Ridden Like a Horse?

No. Zebras are notoriously untrainable with their aggressive tendencies, among other things.

Unlike horses that have been bred and trained for thousands of years for people to be people-friendly and domesticated, zebras, on the other hand, have been unable to be modified from being wild animals.

Before you can ride a Zebra, it has to be domesticated and to be trained;

an animal must be able to meet specific criteria like having a good disposition and being able to handle pressure and not panic at the weight of it.

Zebras’ unpredictability makes it very difficult for it to be domesticated or ridden by a rider.

Is a Zebra Faster Than a Horse?

No. Zebras are not faster than a horse; horses are swifter than zebras; horses can run up to 54 miles per hour while a Zebra is just 38 miles per hour.

Zebras are migratory creatures by nature; they move around to find a better source of food and water during seasons.

Their biggest motivation to run is when they encounter predators, lions are the giant predators to zebras, others like wild dogs and cheetahs focus primarily on young zebras, but if they are in a herd, they may try to attack an adult zebra,

Zebras have incredible stamina and can run at full speed upwards for up to a mile, they can maintain a rate of 30mph(48km/h) for up to 12 miles, another tactic that Zebras used is the zig-zag, they use this tactic to throw off any predators that may likely outrun them

Zebras are more minor, slower, weigh less, and far harder to tame when compared to horses.

Although Zebras are slower than horses, they are very agile and change direction quickly while running, enabling them to evade most of their predators.

Zebras are closely more related to donkeys than horses; the main difference between a Zebra and a horse visually is their appearance;

While a horse tends to have one colored coat, the Zebra has a black and white stripe.

Also check out this article I wrote on do zebras migrate?

Do Zebras Need a Saddle?

No. Since you will most likely not be riding it, it is not advisable to saddle zebras.

The zebras have remained predominant wild, so it isn’t easy to load and have them do all the usual things that horses do.

The zebra is a vigilant and responsive animal that will flee in the face of danger, and it also possesses a robust response when captured; they are not people friendly and also do not fit the ideal criteria for domestication.

Humans have tried to ride all sorts of animals over the years throughout history, animals including turkey, ostrich, tortoise, elephants, goats, horses, zebras, among many others.

While horses are more accessible to domesticate and ride because they have no known predators, unlike the Zebras that have brought many wild predators like the cheetah, lions, and other Savannah cats.

Due to this fact, zebras have mastered the act of flight and fight; they evolved with antsy instincts and developed powerful kicks to fight off their predators; this put Hans at a disadvantage when it comes to riding them, as zebras will not stay calm long enough to do that.

Additionally, Zebras also lack the social character to be domesticated, due to their aggressive temperament, it is a difficult enough task to breed them for long long-term 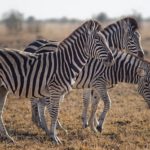