We all know Ostriches for their long necks and legs, flightlessness and being one of the fastest runners on earth.

However, not many people know ostriches can be ridden. Yes you can ride an ostrich, however there are so many cons it is probably best not to.

Ostrich riding is a practice that is carried out in many places around the world. It is perfectly acceptable for humans to ride an ostrich.

Can You Ride An Ostrich?

Yes you can ride an ostrich and ostrich riding is a practice that you can find in many countries around the world.

Thinking of an ostrich carrying a human being can be quite challenging as you would most definitely think of a donkey, horse or even an elephant.

While humans do ride ostriches, these ostriches are frequently well-trained in homesteads, zoos, and animal parks and conservation areas.

There are also strict rules and regulations, which contribute to the maintenance of safety standards for both birds and humans.

Humans have always had ostriches around from ancient times so it’s probably not a surprise that over the years they have gotten tame enough for people to ride them.

Ostriches are fast birds and they can run as fast as 30-34 miles however, when carrying humans their speed is often slower. This is due to the human load they are carrying.

Ostriches can also not carry humans for a long period of time. The max time you can ride an ostrich is 5 to 10 minutes.

Can You Tame An Ostrich?

Ostriches have been domesticated for about 150 years although some evidence seems to show they were kept as pets in ancient civilizations.

Ostriches are generally docile except when they are provoked. This can mean bad for whoever they focus their anger on.

They can also easily get bad tempered, especially adults and it is not often advisable to keep them as pets around you.

The ostrich was fully domesticated in the mid-19th century, when South African farmers set up farms specifically for the purpose of plumage harvesting.

In the 1800s, British colonialists promoted widespread ostrich farming and harvesting in order to supply the British fashion industry.

Today there is a flourishing ostrich racing business for tourists in South Africa.

In recent times though there have been concerns about the effect of riding on the birds and some farms have stopped giving tourist ostrich races.

Here is an article I wrote on what do ostriches eat in the wild?

Ostrich can carry humans and ostrich riding is quite popular in some parts of the world.

In South Africa, there are farms that rear ostriches which are trained for humans to ride. They carry out short ostrich races for tourists.

Ostrich riding however, is not like riding a horse as they are not strong as horses.

Ostriches have a hollow skeleton and as such they cannot carry heavy weights for long. The maximum you can go on an ostrich ride for is 10 minutes.

Also, heavyweights cannot ride an ostrich as this will upset their balance.

The max weight often allowed for riding ostriches is about 60 – 70kg so as not to hurt the birds.

This is particularly a source of concern as a lot of animal rights parties have claimed the repeated act of taking the brunt of human weight causes health problems to the birds in the long term.

Although ostrich riding can be fun, you are advised to be careful when riding them as they can get quite aggressive real quick and injure you.

Some people even advise that you should not ride ostriches, however if you are gentle enough, you might do that and get away with it.

Before you can ride an ostrich, you have to get it to like you. As such take your time to talk gently to it.

Also present some treats such as alfalfa pellets, twigs and even rocks. This will make the bird warm up to you and make your riding experience safer as well.

Can You Ride An Ostrich In The Us?

Yes you can ride an ostrich in the US.

A tourist attraction called the ‘Ostrich Farm’ opened up in Jacksonville, Florida.

The ostrich races were very popular and became one of the earliest attractions in Florida.

The ‘Ostrich Festival’ is an annual event at Chandler, Arizona which features ostrich racing as one of its prominent activities.

Other places where you can experience ostrich racing in the US include Nevada at Virginia city, Canterbury Park in Minnesota, Prairie Meadows in Iowa, Ellis Park in Kentucky and most especially the Fairgrounds in New Orleans.

How Much Weight Can An Ostrich Carry?

To protect the bird, the maximum maximum weight allowed when you plan to ride an ostrich is  approximately 60 kg or 132 lbs.

This target can fluctuate slightly in different parts of the world.

Due to the fact that ostriches are birds they have hollow skeletons just like the majority of birds have.

This simply means that birds are not fundamentally strong in general.

It is fairly obvious that ostriches were not designed to carry heavy loads on their backs, and this can result in serious back injuries.

A heavier rider can cause damage to the bird’s bones, which can result in death in severe cases; additionally, it is very difficult to control an ostrich when there’s a weighty rider on it.

As the bird’s feet crumble under the weight, the bird’s balance is disturbed.

If you do go ostrich riding, there is the probability that it would be at a professional ostrich farm.

They would request for your weight and it is advisable that you are honest with your answer so it doesn’t end up affecting the ride.

Does Riding An Ostrich Hurt Them?

Although ostrich racing is quite popular in several parts of the world, there have been concerns raised on how much the racing affects the birds.

Ostriches are not designed to carry weights and they are not even strong to do so unlike horses or donkeys.

Racing an ostrich can hurt the bird and cause injury to the person riding it. If the bird loses its’ balance, you might get trampled under its feet and that can be dangerous.

Animal rights activists have come out to decry the practice and this has led to the stoppage of the practice in some parts.

Lovers of the activity however, are of the opinion that after years of carrying humans, the races will no longer hurt ostriches.

Riding ostriches might sound novel and even bizarre to you but it is something that happens in several places around the world including the USA and South Africa.

South Africa is the place with the most prolific engagement as there are a lot of farms that offer ostrich racing as a tourist attraction.

Ostriches are not designed to carry humans and so the experience is not the same as that of riding horses.

It is often very short and the max time you can spend on an ostrich is about 10 minutes. There are also weight restrictions to riding ostriches in some parts.

This is to avoid heaviness on the bird and also to ensure it does not lose its balance while racing.

Animal activists have urged tourists to not engage in the act of ostrich riding. For them it is inhumane, and will end up hurting the birds.

Before going on an ostrich ride, ensure you are doing it with professionals. 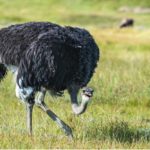 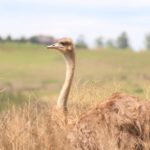