Having the appropriate soil for aquarium plants is vital for the health of both your aquatic animals and plants.

While many people prefer gravel or sand in their aquarium, living aquarium plants require soil to develop.

A good soil will help your aquarium plants grow, get the nutrition they need, stay alive, and reproduce.

However, not all soil types are suitable for aquariums, therefore the topic of “Can potting soil be used in an aquarium?” arises. Let’s find out!

Can You Use Potting Soil In An Aquarium?

Yes, potting soil can be used in an aquarium.

Potting soil is a mix or a blend of different materials, such as sphagnum moss, perlite, bark, compost, vermiculite, or coir, that feed the plant.

A lot of aquarium soils are very expensive, but potting soil is very affordable and poses no threat to the fishes and plants in an aquarium.

Potting soils are free from fertilizers and other chemicals that are considered harmful.

Any soil that has been exposed to fertilizers and other gardening chemicals is harmful to aquarium plants and animals.

Keep reading to find out more about potting soil.

What Potting Soil Is Safe For Aquariums?

There are different types of potting soil, they include;

Organic potting soil is made from natural plant and animal-based materials, such as worm castings, food compost, manure, bones, and remains of decayed plant and animal matter.

This organic material is incredibly fertile which is very good for plants in an aquarium.

All-purpose potting soil can also be used if you want to buy potting soil but don’t have much knowledge about which one to buy.

Can I Use Regular Potting Soil For Aquatic Plants?

Certainly, regular potting soil can be used for aquatic plants but it isn’t the most effective soil to use.

It is also important to note that some soil types are harmful to aquarium plants and animals.

For instance, any form of inorganic soil is considered not suitable for aquarium.

This is because they contain lots of chemicals and fertilizers that can destroy fish and plants.

An example of such soil is garden soil. This soil usually contains chemicals and fertilizers that are not good for aquarium plants and animals.

Garden soil may contain insects that can fill your aquarium with bugs, beetles, and larvae.

These insects can harm your aquarium animals and destroy your plants. However, if you are left with no other option, you can use garden soil that is chemical-free for some time.

How Do You Prepare Potting Soil For An Aquarium?

Preparing a potting soil for an aquarium is quite an easy process, here are the steps below;

You can do this by simply using a large bucket, a mixer or stick, a wide sheet to lay the soil out on to dry, a cap or sealing substrates such as sand or gravel and modeling clay.

The importance of soil in an aquarium cannot be over-emphasized. The soil is usually filled with the nutrients that plants need to take root and grow in your tank.

No matter the kind of aquarium plants you go for, the soil needs to have an adequate supply of nutrients to help them thrive.

Can I Use Top Soil In The Aquarium?

Yes, Topsoil can be used in an aquarium. It is one of the most affordable soils that are very suitable for an aquarium.

Clay topsoil is most recommendable for aquatic plants. Aquatic plants grow best in clay-based soil because they thrive in a higher amount of clay.

The good thing about clay is that it doesn’t hold fertilizers as much as other soil types, this makes it completely ideal. Clay top soils hold nutrients and water for the plant to absorb and it also keeps the plants upright.

The only downside to clay topsoil is that It can be messy and dirty, but that shouldn’t be an issue because you can always clean your hands afterward. What matters is the safety and health of your plants and animals.

Soils like ADA aqua soil or CaribSea Eco soil are very expensive but they are the most suitable for aquariums.

This is because they contain nutrients that are great for plants and have no side effects on fish.

Can I Use Loam Soil For An Aquarium?

Yes, loam soil can be used for an aquarium, this is because it is a mixture of sand and topsoil which is very suitable for aquatic plants.

Loam soil is ideal for most aquatic plants because it holds plenty of moisture but also drains well so that sufficient air can reach the roots.

It also has better drainage and infiltration of water and air than silt and clay-rich soils, furthermore, loam soils are easier to till than clay soils.

In fact, according to most dictionaries, loam soils are soils with humus, organic content, and no mention of particle size texture, and this definition is used by many gardeners.

There are l different types of loam soils and each of them has slightly different characteristics. For instance, some loam soils drain liquids more efficiently than others.

The soil’s texture, especially its ability to retain nutrients and water, is also crucial.

Loam soil is suitable for growing most plant varieties like cotton, wheat, oilseeds, sugarcane, and pulses.

It is also good for some vegetables such as green beans, lettuce, tomatoes, onion peppers, cucumbers, and green beans.

Potting soils are okay for aquariums, unlike normal garden soils that are inorganic.

Organic soils like potting soils are a lot more healthy for aquatic plants and fishes because they contain fewer chemicals and fertilizers compared to garden soil.

Clay topsoil is also recommendable for aquatic plants and they are quite affordable as well. Loamy soils aren’t also a bad option for aquariums.

However, the most recommended soils that fit aquariums are ADA aqua soil or CaribSea Eco soil, and a list of others. The only downside to these soils is their price, as they are usually very expensive. 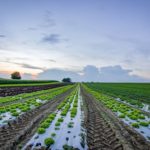