To increase the possibilities of your grass seed turning into a magnificent lawn, start by sowing the lawn with potting soil.

Potting soil is carefully prepared to aid in the rooting and growth of seeds.

If you plan to grow a lawn then you should consider growing it with potting soil.

In this post I will be explaining whether you can use potting soil to grow grass, the advantages or disadvantages, which is better between potting soil and topsoil for grass to mention a few

Can You Use Potting Soil To Grow Grass?

Yes you can use potting soil to grow grass and have a beautiful lawn.

The mixture of soil, seed, fertilizer mix, and water is critical for optimal grass seed germination when creating a new lawn.

Using potting soil on the grass while planting a new lawn helps to keep the seeds moist as they sprout.

When it comes to mending holes in the grass, potting soil is also a suitable choice.

Either caused by insects, drought, or rambunctious children and dogs, bare spots can be filled up with potting soil and grass seed.

What Are The Advantages Or Disadvantages?

Most people associate potting soil with growing plants in containers.

It keeps appropriate moisture while draining excess. It also helps to aerate the plant’s roots.

As much as potting soil is beneficial for growing grass, there are also some attendant disadvantages which I will highlight here.

Potting Soil Vs Topsoil For Grass? Which Is Better?

Potting soil is thoroughly mixed according to rigorous formulas and protocols.

The majority of potting soils are based on peat moss, with various materials added to make them suitable for specific purposes.

The pieces in perennial mixtures are larger and contain more bark.

Some potting soils contain vermiculite or perlite, which are flakes of powdery featherweight rock that have been inflated up to hold a lot of air.

Good potting soils are sterile, which means they contain no weed seeds or illnesses.

Topsoil, on the other hand, is frequently used to refer to the earth’s or soil’s first layer. Because plants have lived in it for long periods of time, it is often nutrient-rich.

Topsoil in farm fields has been changed over, mixed, and frequently depleted as a result of recurrent plantings.

Topsoil is frequently made up of clay or decomposed manure. Weed seeds, soil microbes, and fungi are also present.

Topsoil is great for covering low spots in lawns, as well as along paths and patios. Applying some inches of topsoil improves the chances of lawn grass over subsoil or clay.

Refilling the old soil with topsoil when planting trees can improve plant growth.

Potting soil is more suited for indoor planting, such as in pots and containers. It has been discovered however, that potting soil is also great for seeding grass.

You get the best results when you mix potting soil and topsoil together before seeding your grass.

Should I Mix Soil With Grass Seed?

Mixing grass seed with soil before distributing it to your lawn can be a useful approach to save a step in some cases, especially when applying seed to patches or thinning areas, but it isn’t appropriate for every method of seeding the yard.

If you’re spreading seed over a big area with a spreader, it’s ideal to use pure seed for an even application.

This is because grass seeds require light to sprout, and sowing seed mixed with topsoil may hide the seeds, resulting in less new grass growth than desired.

How To Mix Grass Seed

Mixing your grass seed in properly helps it to grow faster and the nutrients can work on it for better results.

Follow the steps below to mix your grass seed in:

Determine how much seed you’ll require. The quantity of pounds of seed per square footage is indicated on the seed containers.

If you are using more than one type of grass seed, combine the necessary amount of each grass seed in a large container.

With a shovel, mix the seeds until they are fully blended. Stir in small amounts of each seed type, then add more of each type until well combined.

The grass seed is now ready to go into your spreader.

Mix The Potting Soil and Topsoil

Properly mix your potting soil in with the topsoil. This will help your grass grow faster and establish itself.

When dirt is combined with potting soil, you get the best results.

Each soil type contributes something unique to the grass, and combining them will result in a rich and flourishing lawn.

After you’ve combined the dirt and potting soil, it’s time to scatter the grass seeds. It is advisable to utilize a seed spreader to do this activity.

In smaller regions, though, grass seeds can be dispersed by hand.

After dispersion, cover the grass seeds with a rake. Drag the rake slowly across the soil’s surface. This will help to cover the seeds and keep them from eroding.

Flatten The Mixed Soil With A Lawn Roller.

Finally, you’ll need to smooth the combined soil with a lawn roller. The grass seeds will be pushed deeper into the soil as a result of this.

The grass roller will give the seeds a good start, and you will soon notice them taking root. Also, make sure to water the lawn softly to assist the seeds develop.

Having a beautiful flourishing lawn is the dream of every gardener and it starts from the seeding process.

Potting soil we all know is great for growing potted and indoor plants. However, due to its beneficial nutrients, it is also a great choice for growing grass.

Potting soil has a number of advantages including containing fertilizers, being sterile, rapid growth and nutrient balance.

On the other hand, it has a short shelf life, drains quickly and is more pricey. 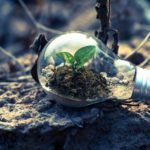 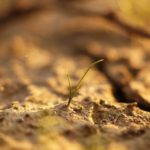