If you have ever wondered if bees do go away at night, then you should read this article to the end.

Bees are a very organized and active type of insect.

They are always on the move, trying to achieve one thing or the other. But despite how active and busy these insects are, they get to take a break at night.

Bees do not travel at night no matter the circumstance that compels them to.

They can work for hours and travel several miles during the day. But when it’s night, they instinctively take their rest.

However, irrespective of the fact that bees do not leave their home at night, they can occasionally come out of their hive when threatened.

They don’t come out of the hive to run away, they come out to confront what threatens them and hopefully return back to the hive afterward.

What do bees do at night?

Bees are not usually engaged in any activity at night. Just like for humans and most mammals, the night is the ideal time for bees to rest after having a long day.

When the night comes, they stay dormant in their hive and don’t move until it’s late in the morning.

Beekeepers would often advise people not to disturb the night rest of these insects.

Bees value their resting time, and if anyone or anything tries to disrupt their rest, they could get really furious and then attack.

Related: Here is an article I wrote on can bees sting other bees

Are bees more or less dangerous at night?

Bees are more active during the day.

The daytime is when these insects are more sensitive, quick to action, and powerful.

Consequently, it’s appropriate to conclude that bees are more dangerous during the day.

At night, they are probably tired of the day’s work and then need to rest. They don’t travel at night or engage in any activity.

All they do is stay quietly in their hive until the nighttime runs out.

Nevertheless, even though bees intend to stay for ant at night, they may occasionally get aggressive and attack if threatened.

Do bees attack at night?

Bees do attack at night. It is not uncommon to find these fascinating insects launching attacks on whoever tries to prey on them.

There have been many cases where people try to steal a beehive and unfortunately, got attacked by the inhabitants of the hive – bees.

Even though bees are naturally dormant at night, it doesn’t depreciate their ability to remain sensitive and aware of their habitat.

If anything goes wrong around a beehive at night, the bees will definitely react. They won’t remain quiet.

Also here is an article I wrote on do bees have bones?

What time of the day do bees go away?

Daytime is when bees are highly energized and willing to put their strength, unity, and hard work to the test. They tirelessly work during the day.

But interestingly, you won’t find bees leaving their hive early in the morning.

Sometimes, these insects will remain in their hive until the sunny afternoon.

Once it’s about 1 to 3 p.m., bees are instinctively alerted to begin the day’s work.

They would leave their hive to go fetch water and nectar for making their food.

What time of the day are bees most aggressive?

Bees are usually very aggressive when they are at work. If anyone attempts to disrupt their activity, they will be quick to attack aggressively.

These insects may be a little bit calm as the day begins.

But the moment they engage in the day’s activities, they become highly sensitive and prepped to launch attacks when need be.

It is safe to say that bees are most aggressive in the afternoon since that is the time they tend to be working.

Do bees stop flying at night?

Although bees are less active at night, it doesn’t impede them from flying. Bees can fly at night but happens occasionally.

As long as they are not disturbed while resting in their hive, they will remain dormant.

If they perceive any threat, however, they may fly around the hive with the intention of attacking who or what threatens them.

Moreover, another thing that can compel bees to fly at night is light.

If a bright light is positioned close to the hive, the bees will react to it by flying within the hive or outside.

Why are bees coming into my house at night?

There are multiple reasons why bees may be encouraged to move into your house. Like I’ve mentioned in this article, bees are drawn towards light.

So, if there is a bright light on your porch and there’s a beehive close by, the light could easily attract the insects to your house.

Small lights won’t attract any bees. But a bright fluorescent light will steal the attention of a group of bees nearby.

They could react to the light by coming close to it.

Another factor that can make bees come into your house is hunger.

When bees are quite hungry, they get restless and uncomfortable until they are able to make food. If your house is near a beehive, it may attract hungry bees.

Are bees at night attracted to light?

Bright lights are one of the significant things that keep bees from stay dormant at night.

Even though it is in the nature of these insects to be calm at night, they lose every sense of gentleness and calmness when they sight light.

Bees are typically sensitive and light is definitely one of those things that trigger their sensitivity.

Bees are attracted to light at night. You can carry out a little experiment if you need more validation concerning this.

Locate a beehive that still has bees living in it.

At night, place a bright light not too far from the hive and watch what happens next. You can use a camera to capture this phenomenon.

If you take your time to observe the nature of these insects, you would marvel at your discovery.

Their state of determination to achieve a common goal is incredible.

They are protective of their colony and would do anything to keep it from harm.

Lastly, you must always remember that bees are always active during the day but dormant at night.

Understanding this will enable you to know more about these insects. 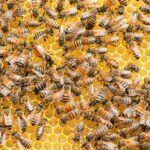 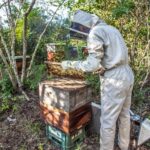