While tending to my bees last week, I wondered whether do bees have tongues?

Think about it – do they? And if they do, what is it used for?

Yes, bees have tongues. The tongue of the bee is located on the head of the bee, and it is composed of three mouthparts.

Amazingly, this bee structure that functions as its tongue, doesn’t function like the conventional tongue. It works like a straw.

The mouthparts are what come together to function as a straw.

The tongue of the bee can either be long or short, and it determines the flowers that the bee can suck up nectar from.

Bees usually have their tongue folded up and kept inside their head when it is not in use.

When they need to make use of their tongue, they unroll it into its full length to reach deep into the flower and suck the nectar.

What is a bee’s tongue called?

A bees tongue is called a proboscis. The proboscis is long, pointy and soft like that of humans.

The bees’ tongue functions as a straw because the bee uses its tongue to suck up nectar from flowers.

Bees need long tongues so they can reach into the flowers and get to where the nectar is.

When the bee gets to the flower, it unrolls its long tongue to enable it to suck the nectar.

Bees also make use of their tongues to keep themselves clean. This is done by licking their furs.

They also assist to clean each other as well as the queen. Then they use their tongues like a broom to lick the inside of their hive to keep it clean also.

Related: Here is an article I wrote on do bees have eyes?

Do bees have any taste sensation?

Yes, bees have a taste sensation.

Most insects have taste sensations, using their sensilla, which are hair-like structures containing nerve cells that are sensitive to particular substances.

However, this is different for honeybees. While the honeybee doesn’t have those hair-like structures, except of course their antennae can pass for it.

They have their sensilla located on their mouths, antenna, and the end of their feet. So, bees can taste using their feet.

They taste with their feet to decide if something is worth eating or not.

When they land on a flower, they make use of their feet to taste the nectar before rolling out their tongue to taste it.

What are bees tongue used for?

Their tongue is used to suck nectar from flowers, like straws.

This is the reason bees have their tongues so long so that they can be able to reach deep into the flowers and suck the nectars.

Bees also make use of their tongues to clean themselves up.

Also you want to read this article I wrote on do bees have noses?

The bees’ tongue and mouthparts have tiny hairs all over them.

The hairs are in turn covered with pores. The tongue is also an elastic organ. The bee can roll its tongue back into its head as quickly as it can unroll it.

Do honey bees have long tongues?

The answer to this question is a Yes and a No.

There’s no definite answer to whether bees have a long tongue or not and that is because some bees have long tongues and others have short tongues.

There are various species of bees, and so the length of their tongue is dependent on their species and size.

Honey bees are somehow in the middle. Their tongue can not be regarded as a short tongue, and it can not be called long either.

So, it might be safe to just tag them medium length.

For honey bees, because their tongue isn’t as long, they go through a shorter way to gain access to nectar of flowers that they cannot reach.

In this case, what they do is that they drill a hole through a petal to make it easier for them to reach the nectar.

How long is a bee tongue?

There are different lengths of a bee’s tongue. The length of the bee’s tongue differ with its specie and size.

The longest a bee’s tongue can go when fully stretched is about 2 cm, however, it is difficult to fully tell the length of the tongue.

No, the tongues of bees are not hollow.

The tongues of bees are long, elastic organs that usually grow to about 2 cm when fully stretched.

Bees do not have hollow tongues because when they are pollinating with flowers, a hollow tongue will not be able to get all the nectar.

What color is a Bee’s tongue?

The color of a bee’s tongue is red. It could be a long red tongue or a short red tongue.

The reddish coloured tongue has hair-like structures at it’s tip. This is what enables the bee to suck in nectar.

Do bees die with their tongues out?

Yes, bees die with their tongues sticking out, however, this may mean that they probably died from pesticide poisoning.

When bees are poisoned, their bodies will be found in piles.

A large pile of bees where all of them died with their tongues sticking out is an indication that the bees have had access to some sort of chemical or pesticide that has killed them.

Also, they could die sticking their tongues out as a result of change in weather.

If the weather is really cold, it could lead to the death of the bees.

As examined, bees have tongues.

The mouthparts of bees consist of three parts and these three parts come together to form the tongue of the bee which is called the proboscis. 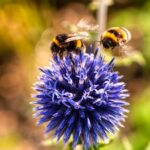 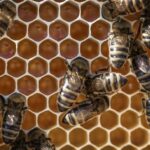