If you are asking this question, then it is obvious that you have a lot of ticks in your backyard and you are looking for a simple way to get rid of them.

Keeping and raising ducks in your backyard take a lot of work so it’s nice to take stock of some of their extra benefits.

Do ducks eat ticks? Ducks eat ticks and they absolutely love it. Feeding on backyard insects like ticks helps you control your tick problem while also providing a rich source of protein and other minerals to your birds. There are farmers and duck owners who swear by using ducks to get rid of ticks.

What are the dangers of ticks?

Now we know that you can use your ducks to combat your tick problem, what are the dangers of having ticks around in the first place.

According to this Wikipedia article here, ticks are tiny insects that are usually attracted to humans and their pests

Unlike ants whose sting causes a painful sensation, tick bites are harmless but they can cause an allergic reaction and there are certain ticks that can pass on diseases from humans to animals.

If care is not taken, they can be very dangerous and can cause more harm than good to you and your birds.

1. Ticks can cause Lyme disease

Deer ticks most often spread lyme disease and they are very common in the midwest and northern parts of the country.

Lyme disease is very dangerous and some of the symptoms include fever, headache, rashes, sore joints and muscles.

But you want to make sure that when noticed early, seek expert help because if you allow it to progress then it might lead to short term memory loss and excruciating pain for your birds.

This is another very terrible well known tick borne disease.

It is mostly common in Colorado but it can be found in high altitude areas in other states.

Some of the symptoms include fever, aches and fatigue and can cause serious pains to humans and birds alike

While most people do not dread Colorado tick fever like the Lyme disease, it is an equally terrible disease and you should get rid of it

Symptoms include fever, vomiting and rashes and if left untreated can in extreme cases cause death.

Now something you need to know is that while it might seem that the colorado tick fever and the rocky mountain spotted are only common in these regions, that is far from the truth.

Most tick borne diseases also occur in other parts of the countries like the midwest and northeast and you want to take advantage of your ducks to get rid of them.

So if you suspect a massive tick population in your area or backyard, then your birds can be of great service getting rid of them.

Are ticks bad for ducks?

After mentioning the diseases that can be caused by ticks above, you must be wondering if your ducks are at risk consuming ticks

The answer is No, as ducks naturally eat smaller backyard insects and ticks are no exception to the insects that ducks can eat.

There was even research which showed that when birds (ducks and chickens) grazed among tick infested cattles for 30 – 60 minutes, they ate an average of 80 -100 ticks and nothing happened to them.

Using ducks as a natural preventive measure against ticks won’t hurt your birds at all and instead the ticks will provide them with the much needed proteins and minerals.

Here is an article I wrote of comprehensive foods for ducks

How do ducks eliminate ticks?

Ducks usually love digging and foraging in the mud for food

Same thing with ticks and bugs

They will keep their eyes open for anything small that moves and when they find anyone, they attack and eat them up

If you have a tick problem in your backyard, then the best thing you can do i set your ducks loose and allow them have fun

It will not take time and you will be free of all that tick infestation.

Can ducks get ticks?

So the water helps to keep them clean and also get rid of all forms of parasites and bugs that might cling to their feathers.

How do ducks compare with guineas?

Now some people swear by the fact that the guinea fowl is your best bet to get rid of ticks in your backyard.

I will have to disagree with that notion

See I own both ducks and guinea fowl in my backyard farm and I can tell you without a doubt that ducks do a better job of getting rid of ticks than guinea fowl.

The simple reason is because of the beak of both birds

Ducks have a very long and wide beak which makes it very easy to pick up ticks and bugs while that of the guinea fowl is very small and pointed.

It is like the difference between using a pair of tweezers or a sand sifter to do the same job. You already know which one is better.

Are there other steps to get rid of ticks?

While using ducks to combat your tick problem can be very helpful, we need to face reality and realise that you might need to take other actions

Here are some actions that you can take

Ducks will eat ticks and other backyard insects.

They are also a very good option for battling any tick problems you have in your backyard. 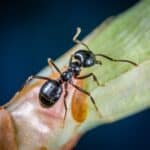 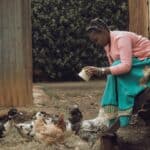