Eagles are huge and majestic birds of the Accipitridae family. They have unquestionably earned the title of “Kings of the Air.”

Surprisingly, these birds have excellent vision. Their keen vision makes them effective hunters.

They can, however, recognize inviting prey as quickly as we can snap our fingers.

But do they also fly at night? Let’s take a closer look.

Do Eagles Fly At Night?

No, eagles do not fly during the night. But that doesn’t mean they can’t. If an eagle so desires, it can fly at any time.

In the real sense, they can, but they don’t. This is due to their inability to see clearly at night.

This may come as a surprise. I completely understand the possible confusion. These birds, are known to have an incredible vision, which they employ for hunting.

As a result, they have risen to the top of the food chain. So, why is their night vision so poor at night?

The retina of an eagle’s eye is deficient in rod cells. As a result, they are unable to see clearly in low-light circumstances.

Surprisingly, their eyes are the same size as ours. However, there is a little change in its structure. So they see as much as we do in the dark.

However, birds like owls, nightjars, frogmouths and bat hawks are known to have good vision at night.

Related: Here is an article I wrote on why eagles gather in groups

What Makes An Eagle Fly At Night

Let’s have a look at some of them:

To stay safe: Eagles can fly to avoid danger. A variety of hazards can cause an eagle to fly at night. Wildfire is an example of this. They are fast-moving, devastating fires.

Wildfires occur unintentionally and burn in natural settings such as forests, grasslands, and prairies. Fires are generally frightening, and birds caught in them may panic.

Wildfires have been known to kill a variety of eagle populations, ranging from the young to the old.

An Eagle’s first reaction to this would be to fly away regardless of its state, active or inactive.

Most birds naturally try to vacate the burning area. A bird caught in a thick smoke will be unable to move. Wildfire smoke has been found to have a dangerous health effect on birds. This however is not a common occurrence.

Hunting: Eagles generally do not hunt at night. That doesn’t mean it won’t take advantage of an opportunity if presented.

The eagles’ primary goal is to source for food. Therefore, if aided by artificial light with its prey in close vicinity, they can fly to hunt it down.

They do this with dangerous precision. I’m sure they would not appreciate that we attest that darkness brings uncertainty and vulnerability.

Are Bald Eagles Active At Night

Bald eagles are the second largest bird in North America. They are well-known for their noble appearance, strong strength, and incredible agility.

Because of their exceptional traits, they were named the National Bird of North America in 1792.

These birds of prey, however, are not active at night. They are active during the day. They too, sleep like humans.

Don’t be too surprised. Eagles, interestingly, have a distinct sleeping routine. The majority of Eagle species stand on one leg and tuck the other into their plumage.

When an eagle lands on a tree perch, the flexor tendons of their leg muscles tighten. In addition, the toes are locked around the perch.

This reflex action makes it impossible for them to fall off a tree. They sleep with one eye open.

I guess they have trust issues as well (just kidding though).

Furthermore, most times Eagles do not sleep in their nest. They prefer being perched on a close branch to sleeping in the nest.

This sleeping pattern is mostly during their nesting period. Eagles are territorial and protective of their young ones. This may be one reason for this sleep pattern.

Both males and females prefer leaving the nest for their young. Then, they perch on a branch to guard them.

What Time Of The Day Do Eagles Fly

Eagles can be visible at any time of the day. Because of their constant search for food, they are seen when the sun rises and when its sets.

They are most likely to be visible between 7 am to 10 am and 4 pm to 5 pm. Although, bald eagles are more active for hunting from sunrise to about 10 am. After that, they soar.

At least they do what they love (hunting) and have flexible working hours. And so it is very rare to see them fly at night.

Also check out this article I wrote on eagles attacking humans

Can Eagles See At Night

Yes, they can but not clearly. Eagles being diurnal predators can only hunt in the daytime. And they are mostly inactive at nightfall.

Eagles have much higher cone cells that make up for their excellent vision during daylight. Their lack of Rod cells makes it difficult for them to see at night.

You might be wondering what cone cells and Rod cells are. Well let’s deviate a little.

Cones and Rods are two types of photoreceptors in the retina. They are useful for providing vision in the eye.

However, they both have different yet specific tasks they carry out. Let’s understand this better.

Come cells: Cones cells provide visions in daytime or bright light. They are responsible for color vision as well as color sensitivity. They function well in relatively bright light. Eagles have an abundance of cone cells which gives them a visual acuity of .

However, despite having such poor visions at night, they are very alert. This could be considered a major insecurity for these magnificent birds.

Do Eagles Hunt At Night

No, eagles do not hunt at night. This is because they have a bad night vision.

However, hunting for these birds is an innate skill. They are exceptionally skillful in the art of hunting which makes them dangerous to their prey.

Eagles’ eyes are necessities for hunting. However, without proper visions, they become incapacitated at night. This, therefore, hinders their predatory abilities.

Eagles however prefer hunting at dusk, when there’s little light to conceal their movements from their prey. They swoop in for the kill quickly and quietly.

Nevertheless, with very little artificial light, they can hunt. But, the prey has to be in close range. Well, in this scenario, I guess it’s bon a petit for Mr. Eagle and farewell to the said prey.

360-degrees could be a bit of an exaggeration. However, eagles can see at 340-degrees. This is outstanding compared to a human’s 180-degree vision.

This angle allows for excellent peripheral and binocular vision. An Eagle can rotate its neck at approximately 180-degrees. Whereas humans can only achieve a 70 – 90 degrees rotation.

Research shows that no vertebrate can successfully achieve a 360-degree rotation. This is because of the joints that attach their head to the spinal cord.

However, the eagle’s neck has impeccable flexibility.

The retina of an eagle’s eye has sensitive light-detecting cells. And their outstanding depth of vision allows them to focus like a strong telephoto lens.

Eagles have eyes located towards the front of their head. Their eyes are angled 30-degrees away from their midline.

Humans’ eyes do not stand a chance of being compared to that of an Eagle’s, despite having similar shapes.

Many birds of prey see colors on wider spectrums. Research has shown some interesting facts about an Eagle’s eyes. Some of them include;

An eagle flying at night is quite uncommon. Even though these birds have excellent vision during the day, they see very little at night.

During the night, they remain largely dormant. And, they rarely go out at night to hunt.

Eagles have 340-degree vision angles, allowing them to see prey from a long distance. Furthermore, they can turn their necks at a 180-degree angle.

However, these distinguishing characteristics compensate for their lack of taste and scent. 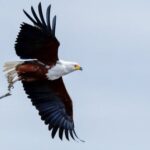 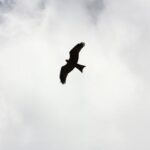