Do guinea fowls mate for life? It is probably a question you have been finding answers to, do not worry as you’re in the right place because we will be answering every question about Guinea fowls and how they mate.

Yes, guinea fowls can mate for life. The nature of the male and female guinea fowl is monogamous, so when they pair with each other, they stay and mate together for a lifetime.

Furthermore, in this article, we will be telling you everything you need to know about guinea fowl and how they mate.

How many females can a male guinea fowl mate with?

A Guinea fowl is monogamous in nature, that is they only involve with one guinea fowl at a time.

They do not lay with any other guinea once they are paired.

After around 4 weeks to 6 weeks of having a short association, a male guinea and a female guinea will pair and mate together for life or throughout the mating season and could even pair again by the next mating season.

Sometimes they form the same group for the next mating season. They don’t go mating with other birds once they have paired.

A male guinea fowl can only mate with one guinea hen because they are committed to being with only one at a time.

Related: Here is an article I wrote on can guinea fowls be pets?

How do Guinea fowls mate?

When do guinea fowl mate?

The mating season starts after the rainy season, while breedings start in spring.

Formed guinea couples can last forever or per their mating season.

After mating, the guinea hens start laying eggs in March or in April and this may continue till October.

The guinea hens can lay over 160 eggs in a year.

When their breeding season is close, guineas go in pairs in search of hidden nesting sites.

Do guinea fowl mate with other birds?

Yes, guinea fowls can mate with birds of different species, for example when a Guinea fowl mates with a chicken their offspring are called hybrids.

Guinea fowls can be pushy with birds that are smaller to them, for this to happen, guinea fowls would have to be kept or raised around such birds.

A male guinea fowl may mate with more than a single female bird in other species.

Although birds would normally prefer to mate with birds of their kind, in some cases, there are exceptions like when chickens are kept close to guinea fowls then they can mate and have hybrid offsprings.

Mating of Guinea and Chicken can happen, and when it does, they breed sterile offspring.

When chickens and guineas are kept in close confinement they interbreed occasionally, and the eggs may be fertile, that is, they do not survive except the hybrids are more like the guinea parent.

Also check out this article I wrote on can guinea fowls defend themselves?

How frequently do Guinea fowls breed?

Guinea fowls breed once a year, they lay their eggs in a season.

They lay from 80 to 160 eggs a year and that’s low compared to what chicken lay.

They breed only in warm seasons, that is, if you keep guinea fowls, then you should expect them to lay eggs around winter through to summer.

Once a guinea fowl finds a suitable place where they can make their nest, they start laying there, they aren’t fussy about where to lay eggs.

They can start breeding as early as 20 weeks old, but most keets won’t lay eggs in the year they were raised as they stop laying when the days begin to shorten and they’ll wait till the following year.

Guinea fowl eggs are thick but smaller than that of chickens and are very shelled.

Guinea fowls do not make good mothers to their keets, but they can be.

It depends on the individual guinea hen or in the particular situation. Unlike chickens who are great mothers.

Guinea fowls after laying eggs and they hatch, they do not care about the keets and night even step on the poor babies which might kill them.

Sometimes after laying eggs, the guinea mothers can change their minds before hatching starts when they go broody and then leave their eggs alone and the embryo can die.

Sometimes guinea fowls, after hatching they get tired of the motherhood role and leave their keets alone to die.

Guinea fowls could be good mothers under good circumstances.

If you’re raising keets, sometimes it’s good to leave them with chicken mothers to raise because they unlike guinea fowls protect their chicks and do not leave them to die.

Should you raise guinea fowl keets and chicks together?

As a farm owner, you can decide to raise your keets and chicks together, but note that when raising them they require different things for growth and healthy living.

Keets need to be fed with a high level of protein than chicks.

When guinea fowls birth their keets, it is very important that at least for the first 5 weeks you feed them with a high level of protein or game bird starter, then after that, you can feed when with standard chicken feeds.

You can raise keets under a broody guinea fowl or chicken, but raising them with hen is very good because the hens teach them to roost and the keets would start to behave like chickens.

Also, raising keets with chicks will make the keets not wander off because they’ll bond with the chicks which is also an advantage.

Guinea fowls are monogamists, once they pair with another guinea fowl they will mate with that Guinea for a lifetime, so yes Guinea fowls mate for life.

In some situations whereby guinea fowls are put in close confinement with other birds then a single male guinea fowl can mate with more than one female bird.

When guinea fowls mate with other species their offspring are called hybrids.

Guinea fowl love to mate with their kinds and they do so for a lifetime or pair again the next mating season.

Their mating season starts after the rainy season, that is from winter through to summer and fall.

Also. Guinea fowls do not make good mothers. Unlike chickens who care for their chicks, guinea fowls after hatching leave their keets to chill and die.

Guinea fowls do mate for a lifetime, once they pair with each other they mate for life. 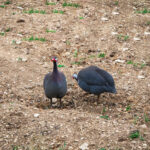