Ever wondered if turkeys have tails?

Are they like other birds? And what do they use their tails for?

A bird’s tail is of great importance to it because it uses it for many purposes.

It is used mainly for balance. It helps them land gracefully, perch without falling or swaying unnecessarily and to take off with finesse.

Turkeys can fly so their tails are equally important to them for these reasons too.

Wild turkeys sleep on trees so their tails are important to navigate a quick flight.

It is also with tails male turkeys woo the hens during the mating season.

You would have seen male turkeys perform a dance and fan their tail feathers in display during mating season when wooing the hens.

Are turkey tails bad for you?

Yes, they are. I’m sorry if you love them and eat them a lot, but turkey tails are bad for you.

It does a lot of damage to the health, which is why you would hardly get it in the U.S.

Turkey tails, why rich in protein, are very high in fat and cholesterol.

It’s like a short road to obesity and death.

What we call turkey tail is actually a gland that joins a turkey’s feathers to its body.

And it is filled with oil that the turkey uses to preen itself. This makes it very oily and unhealthy.

It is popular in the Pacific Island communities in the U.S, the Samoans especially love it, as it is very cheap and easy to get.

I guess we know why obesity is on the increase there. It is reported that 80% of the adult population are either overweight or obese after a research was conducted.

Some countries banned turkey tails but had to lift the ban later so they could join W.T.O.

Even they are not banned in your country or community, you should avoid eating them because they are bad for your health.

Want a comprehensive guide on how to raise turkeys for meat and profit?

Do female turkeys have a fantail?

During the mating season, male turkeys do what is called strutting.

This is when a male turkey parades in front the females dragging its wings and spreading its tail feathers to form a fan. Female turkeys do not do this.

Do turkey tails have meat?

Yes, turkey tails have meat which can be consumed as food.

But, since a larger percent of it is fat, it should be avoided.

Do turkeys lose their tail feathers?

Adult turkeys undergo what is called molting once in a year.

Occasionally it may happen twice.

This is when they shed worn feathers to grow new ones.

Due to constant wear and tear, rain falling and sun shining on their feathers during the course of the year.

Their feathers become weak and loosen in their follicles and new ones trying to grow push them out.

Not only do they lose their contour and down feathers, their tail feathers fall off and are replaced too.

It is just a way to ensure their feathers are always fully functional and able to serve them well.

You should feed your turkeys well during this period as they need it to grow their feathers back quickly.

Related: Here is an article I wrote on do turkeys eat ticks?

How can you tell the difference between a male turkey and a female turkey?

✓ Size. A male turkey usually bigger than the female turkey. The difference is always very clear when you see them together.

✓ Feathers. The male turkeys’ feathers are usually brightly colored while the female turkeys have full brown feathers, which is good for a camouflage in the forest. When you see a turkey with green, bronze, gold etc. feathers, it is male.

Their heads are usually bare and red.

✓ Snood. All turkeys have this flesh appendage just below their head, at their neck. The  male turkey have a larger and plumper one which is easily detected.

✓ Spurs. Adult male turkeys have spurs but female turkeys do not have. A spur is like an extra toe, usually spotted high up in the turkey’s legs.

Turkeys have tails which they use for balance during their short flight.

The male turkeys also use theirs for wooing females and send off rivals.

Turkey tails have meat but they are bad for your health.

They contain a lot of fat and cholesterol which can cause serious health issues.

It is popular in the Pacific Island communities in the U.S. because it is cheap and considered tasty, but the high rate of obesity in those areas is quite alarming and nothing to envy.

Turkeys lose their tail feathers when it is worn out but they grow new ones quickly.

There are lots of differences between the male and female turkey.

From their size to their feathers, Snood, color etc. they are quite different and can be told apart easily. 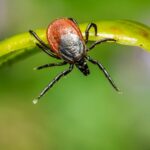 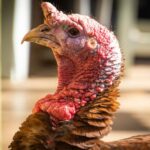