Maize which is also known as corn is a cereal grain grown across the world.

It is grown as food for humans and also as animal feed. Farm animals are animals domesticated and grown on the farm for one benefit or another to the farmer.

Some farm animals however if allowed to roam on the farm can cause damage to maize plants grown on the farm.

Some attack tender maize plants and some attack even mature ones.

Let’s take a look at 10 of these animals so you can keep them off your maize plantation.

Goats are ruminants with horns and hooves reared for their meat, milk and for weed control.

They are notorious maize eaters and will not hesitate to attack your maize farm if you turn your back.

Providing your goats abundance of hay or other feeds won’t stop them from feeding on your maize plants.

They attack maize by eating the leaves.

When the plants are still small, they can eat it to the ground, and when they are mature, tall, and they can’t reach the tender leaves, they cut the stalk to get to them, thereby damaging the plant completely.

Cows are large herbivores reared on farms across the world for their meat and milk which is used to make other products.

They are considered one of the most common mammals in the world and very profitable in farming.

Cows are grazers, they feed mostly on grass and can survive on it.

More than 50% of their feed comes from grass which is why they are a threat to maize plants.

They attack these plants by eating their leaves and stems. Having cows free range on the same farm you have maize planted can lead to losses.

Related: Here is an article I wrote about farm animals that can be left alone

Sheep are docile ruminants reared on many farms for their meat, milk and fiber.

These farm animals are herbivores, which means they eat grass. Sheep are grazers.

Sheep are known to attack maize, since it is a good source of their diet and provide nutrients to their body.

If you have corn plants on your farm, then you should find a way to keep your sheep off the area.

They will eat the leaves and stems, rendering the plants useless and unable to grow or bear fruits.

Sheep move together in flock, so there’s more damage if you fail to protect your maize farm.

These animals from the rodent family are reared on farms for their meat and considered micro livestock.

They are also herbivores which means majority of their diet is based on grass.

They can be fed hay and they can feed directly on fresh grass.

This makes a threat your maize farm. Guinea pigs particularly like to nimble on small plants and tender leaves.

They will attack maize when it’s still small and the leaves tender.

Mature corn plants are not all that appealing to them but they may still try to eat at the base, causing some damage.

Birds are known to attack maize plants especially when it already has a cob, eating the seeds and damaging the crops.

Poultry birds are not left out. Turkeys are omnivores. This means they eat animals as well as plants.

This makes them very dangerous to maize farms. Turkeys, especially wild turkeys are known to attack maize farms and eat the corn plants to the ground.

Your domestic turkeys if permitted, will eat the stems, leaves and roots of your maize. They will also eat the corn cobs, leaving you with nothing.

Pigs are omnivorous mammals. They come in different species and are reared for their meat and skin.

Pigs consume both plants and animals. They are also scavengers, so they will also eat anything in between.

Most farmers rear them in a closed environment but some also allow them to free range.

If you have pigs free ranging on your farm, then you should know they can attack maize.

If they come across your corn plants, they won’t spare it. They will eat them to the ground, even uprooting most.

This is why you should try to find a way to protect your maize from animals.

Alpacas are pleasant pseudo ruminants and are 100% herbivore.

They enjoy eating grasses, which is the main source of their diet. They eat hay, pasture grass or silage.

When eating plants, they especially like to eat their stems and leaves.

Alpacas don’t do well being camped so they need to free range, which can be a disadvantage to your corn plants.

Having alpacas on your farm close to your maize will hinder it from growing well. They may even be damaged beyond growth.

See this list of farm animals that eat bugs

Rabbits are farmed across the world for their meat, fur or wool.

They are herbivores and they feed mostly on hay and on pasture grass. They can be kept in enclosed areas but they do better when allowed to free range. It enables them exercise and improve their lives.

This can however be a disadvantage if you have maize plants. Rabbits are lovers of tender plants and will not ignore your maize plants.

They attack maize plants by eating the leaves and stems while still young and tender. This hinders the plants from growing to maturity.

They also attack nursery maize plants by digging out the seeds that may still be under plants.

Donkeys or asses are farm animals raised mainly to protect smaller animals and poultry from predators and to do some work.

This makes them a disadvantage on your farm if your maize farm is not well protected.

Donkeys attack maize plants by feeding on the leaves and stems.

They eat both young maize plants and mature ones.

The corns itself are not good for them as their digestive system can’t digest it fully, but this doesn’t stop them from destroying and eating some.

Horses are herbivores which means they mainly eat plants and plant products.

They are raised on farms for riding, breeding and carrying some loads.

They are also sometimes bred to run and take part in races.

Horse farming is quite profitable but if you free range them on the farm, they could lead to some losses if you have maize plants.

Horses attack maize plants because plant is their natural diet.

They eat the leaves and stems thereby damaging the crops totally.

They eat both young and mature plants. They can only be stopped if you spray the plants with predator urine. 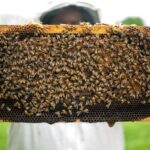 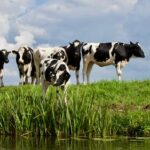