Everyone loves getting flowers because they are beautiful and of course, they smell nice.

However, beyond all that, flowers are also symbolic and represent various things.

Strength is one virtue symbolized by some flowers and gifting them to a person can inspire strength in them.

Flower symbolism extends hundreds of years into history and can be seen everywhere from art to music.

Today we will explore some flowers that represent strength which can be seen all around us today.

Gladiolus plant commonly referred to as Sword Lily, is a flower in the Iridaceae family.

The majority of the flower species are native to Sub-Saharan Africa, with only about ten species native to Europe.

It has sword-shaped leaves and a fragrant, attractive flower on majestic spikes.

Gladiolus is derived from the Latin word ‘gladiolus,’ which means ‘small sword, and the name is gotten from the shape of the flower’s leaves.

Gladiolus is a hardy plant that reminds us of how strong we can be, both in our personal character and in our physical body.

Gladiolus is a popular garden flower and it’s also a favorite as a cut flower. It comes in a variety of colors including lilac and purple.

Allium flower is native to the Northern Hemisphere, but it is grown all over the world. This flower comes in a variety of hues, shapes, and dimensions.

It is made up of globe-shaped flower clusters that are mostly white, yellow, blue, pink, and purple in color.

This genus’s members are all edible and are grown all over the world. Species bred specifically for ornamental purposes, on the other hand, are less appealing to eat.

They take up little space and add color and height to any garden. Alliums, which are known for their flawlessly round shape and multiple and are also excellent for flower arrangements.

Allium is often used to represent strength and good fortune. These flowers serve as a reminder to persevere and be patient during difficult times.

They are also lovely flowers to have in your garden.

Here is an article I wrote on flowers that protect vegetables

The Phacelia is a species native to North and South America that is also known as the Scorpionweed.

The name ‘ Scorpionweed’ is gotten from its flower clusters, which curl in the shape of a scorpion’s tail.

Phacelia is an adaptable flower that can tolerate a wide range of soil types as long as it is well-drained.

They produce purple or blue flowers in short clusters or fascicles. Honeybees and bumblebees are drawn to their eye-catching flowers.

The phacelia plant thrives in warm weather and can be found in sandy and gravelly soils. It is drought-resistant and can withstand high temperatures.

Phacelia is not generally considered to be toxic.

Some species, however, can cause skin irritation similar to Poison Oak (Toxicodendron diversilobum).

The Astrantia flower, also known as Star herb and Masterwort, comes in nine varieties that are distributed throughout Europe and Western Asia.

The name ‘Star herb’ refers to the flower’s Latin name ‘ Aster’ which can also be translated as ‘Star.’

It grows in hot and muggy mountain forests and pastures. A delicate flower with a tough exterior and a straw herb-like structure.

Astrantias have long, sinewy stems and portable clusters of star-like flowers with unusual and attractive shapes.

Each flower is essentially a tiny umbel made up of many tiny flowers encased by petal-like bracts.

They bloom in shades of white, pink, purple, and red in the spring and summer, attracting butterflies and other wildlife.

The Latin word ‘Potens,’ which means ‘powerful,’ gives its name to the Potentilla flower and this is a nod to the plant’s numerous medicinal properties.

The delicate five-petaled flowers of many species can be found on palmate leaves with five leaflets.

Aside from their long flowering period, these plants are highly regarded for their extraordinary toughness and adaptability.

It is common to find Potentillas in the northern hemisphere.

Known for their low-maintenance qualities, potentillas are a popular choice for the garden. Drought, pollution, and salty air are no match for this hardy plant’s ability to survive.

They are appealing to birds, bees, butterflies, and other pollinating insects, and are able to withstand both heat and drought with relative ease.

When you see the cinquefoil emblem, you know that it stands for a lot of things such as strength, loyalty, and honor.

Valeriana is a tall stem of fragrant white, pink, or lavender flowers that emerges from the plant. Star-shaped, tiny, and beautiful are the flowers.

As a medicinal plant, Valerian is highly prized and has a wide range of traditional uses including as a sleeping tonic.

To be healthy or strong in Latin means “Valere,” hence the name “Valeriana.” Symbolically, the name conveys a sense of power and bravery.

It implies being strong for things that are ahead.

This plant’s Latin name, Aquilegia, comes from the word “aquila,” which translates to “an eagle.” The name refers to the flower’s five eagle-like claw-like spurs.

“Columbine” is another common name for the flower.

In the Northern Hemisphere, Aquilegia or the Columbine can be found in a wide range of environments.

Small, round leaves and five petals and five sepals with spurs extend from the base characterize columbine plants.

As they grow on long, thin stalks, their delicate and often multi-colored flowers draw insects like butterflies and hummingbirds.

The Columbine is often used to represent wisdom, strength, and joy.

Its symbolism also extends to the Christian religion as the seven gifts of the Holy Spirit;  wisdom, understanding, counsel, fortitude, knowledge, piety, and fear of the Lord- are symbolized by the flower:

Echinacea which is also known as the coneflower is a lovely daisy-like flower. In the center, there is a cone-shaped disc with petals around it.

Dark green leaves cover the plant, which has a long, slender stem.

The Latin word ‘echinos’ meaning ‘hedgehog’ or ‘sea urchin,’ is the origin of the plant’s name. This is because of the prickly center of the flower.

Echinacea has ornamental and medicinal uses which date back thousands of years.

There is a long-lasting beauty to this plant’s bloom, which can last for up to two days after it’s harvested.

Due to its medicinal and herbal qualities, the coneflower is a popular choice for many. The coneflower’s symbolism is related to strength and healing.

Antirrhinum, also known as Snapdragon or Dragon Flower, is a family of flowering plants native to Europe, northern Africa, and western Asia.

In certain conditions, the flowers emit a subtle perfume, although they are scented generally.

Pollinators like bumblebees and hummingbirds love them and they can often be seen hovering over snapdragon clusters.

Snapdragons are popular garden and cut flower plants great for landscaping and also in your bouquet.

They are known for their anti-inflammatory and stress-relieving properties and can be used for treating hemorrhoids, wounds, tumors, and ulcers.

The Amsonia was named after a physician from Virginia in the 18th century, Dr. Charles Amson.

This species of flower is indigenous to North America. It is a flower in the shape of a star with leafy stems.

It is suitable for planting as a single specimen or in groups.

These lovely flowers are an excellent addition to any garden. Additionally, they are simple to grow and maintain.

Due to its star-shaped flowers, the Amsonia is also known as the ‘Blue Star.’ These flowers are resistant to pests and diseases.

Once properly planted and established, they are also quite drought tolerant.

Due to these characteristics, the Amsonia also symbolizes determination, endurance, and strength.

They are also significant symbols of our love and affection for those we care about.

These flowers highlighted above represent strength and endurance. They are beautiful, sturdy and nice enough to have in any garden.

If you know anyone who is going through tough times or you would like to praise their hardiness, then any one of these flowers is a good and thoughtful gift for them. 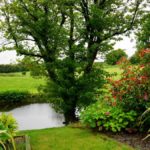