Ever wondered how do ducks float?

It is no secret that ducks like to play or feed in or around water.

These waterfowls enjoy nothing more than splashing water around.

They are built to adapt to this environment.

Just like paper and other light weight objects, ducks have the ability to float while inside water.

They could spend hours playing and eating in the water without drowning.

This baffles a lot of duck owners and they wonder “How do they do this?”

Well, we’ll be looking at some of the several features that give them this advantage over other animals.

Ducks have waterproof feathers that make it impossible for them to sink or drown in water.

While inside water or just after getting out of water, they do what is called “preening”.

Preening is the process in which a duck uses its head and beak to take oil from its “preen gland” (which is at the base of its tail) and spread it all over its body.

This process ensures that its feathers remain waterproof and unable to absorb water.

The feathers become what is called “water repellent”.

Ducks are also able to float because of their ability to trap air with their feathers.

The barbs of a duck’s feathers are so tightly knit that it can hold air in.

This keeps them buoyant.

They trap this air between their feathers and skin which gives them a balloon like shape.

With their unique hollow bones and air sacs, ducks are able to increase their buoyancy and achieve a balloon like effect on water, which enables them to float.

They do this by trapping air in their air sac/ lung which is along the length of their central body.

When they want to dive inside water however, they momentarily empty their air sacs of air and  press their wings together to release the trapped air between their feathers and skin.

Why can a duck float on water but not on air?

This is probably due to the fact that they live with humans and are sometimes reared with other birds like chickens that do not fly.

Wild ducks fly around looking for food and also to escape predators but domesticated ducks are well cared for and do not need this.

Because of the adequate care given to domesticated ducks, they also become too fat to fly.

I believe flight ability has also been bred out of domesticated ducks.

They are mainly reared for their meat and eggs so flight isn’t necessary.

Can a duck sink?

Yes, a duck can sink.

Remember one of the reasons they float on water is because of their waterproof feathers?

Do you also remember how they get their feathers to remain waterproof?

Well, if a duck for one reason or another is unable to preen its feathers, the feathers will absorb water, which will increase the weight of the duck. When a duck’s feathers become waterlogged like that, it sinks.

How long can a duck stay under water?

Ducks are divided into two majorly.

We have “the dabblers” and the “divers.

Do ducks get wet in water?

No, ducks do not get wet in water.

Because of the ability to keep their feathers waterproof, ducks are able to stay in water for a long period of time without getting wet.

Their webbed feet that has no nerve endings also ensures that they do not get cold.

So if your ducks love playing in the water and you are scared they’ll get wet or sick, don’t be.

There really is nothing to worry about.

Do ducks float or tread water?

Ducks float and do not tread water.

Treading water will require efforts like making motions with their legs just to keep afloat, which ducks do not need.

Ducks float on water because of the unique way they were created and not because they tread.

Their hollow bones, air sacs and waterproof feathers are some of the reasons why they can achieve this.

It is possible to see ducks treading in a moving water though, but that is not to stay afloat.

It is so that they won’t be carried away by the water’s currents.

It just a way to maintain their position.

They can be inside water for hours without sinking or drowning.

They do this by preening their feathers while inside water or when they get out of water.

This is also why they do not get wet in water.

If a duck is unable to preen however, probably due to sickness, it can sink or drown because the feathers will become waterlogged.

It is also important that ducks are healthy enough to trap air between their feathers and skin.

While wild ducks can fly, most domesticated ducks are unable to.

This isn’t a problem since they are mainly reared for meat, eggs and also as pets.

This is even an advantage because they won’t be able to fly away from their coop. 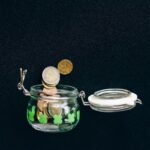 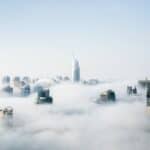