Ducks are very friendly and playful birds and if you can get any one in a good mood then you are sure that they will return the favour.

How does imprinting affect your duck?

When a duck is born, it goes through something called imprinting

What this simply means is that the duckling will attach itself to any person or bird that spends time with it during the first few hours of it being born.

In Its natural habitat, this might be a mother duck, but outside of that it might be a human

When it imprints on a human, it is more likely to show that person and other humans so much affection.

Also if it imprints on it’s mother duck or another duck and spends most of its time away from humans then it is most likely going to show less affection to humans.

So if you want to keep a duck as a pet and you want it to show affection and be friendly to humans, ensure that the first few hours of its life it only comes in contact with humans.

How do ducks show affection?

Now we know all about imprinting and how ducks show affection, but how do they actually do it.

1. By following you around

When a duck has imprinted on you and likes you, it will follow you around wherever you go.

This is their most common way of showing affection and it is really cute seeing ducks marching along in a straight line following their mother.

2. They will cuddle with you

I know I sure do and this is a sign of affection that ducks show to their affection to someone they like.

Ducks love to cuddle and snuggle and oftentimes if a duck likes you, they snuggle up to you and doze off.

Now if you notice this happening to you a lot then you should know that duck loves you a lot because ducks normally tend to sleep in groups.

3. They quack and make noises to get your attention.

Well this is self explanatory right

This is the same with ducks.

4. They will nibble on your hands and feet

In my experience this is like their own special way of saying thank you for feeding us and it kinda cute when they nibble on my fingers.

They really like a gentle pet or scratch around those areas.

Another place you can pet is their backs and their feathers and they also like their necks scratched.

Basically ducks like being petted all over their bodies you just need to start and see where they respond to you better.

Ducks like hugs and they are very friendly and social birds.

When a duck has imprinted on you and likes you, they will cuddle with you, hug you and they like being held by you.

It is for this simple reason that they make very good pets just like I mentioned in this article here.

Can ducks remember you?

Ducks are very smart birds and once a duck has imprinted on you, it will show you affection for life.

One way it does this is by following you around and it also remembers you when you show up.

I remember one time I had this flock of birds but there was one special that remembered me always.

Whenever I show up to feed them it tends to quack and chatter the loudest. It will also follow me around the backyard while I feed the other birds.

I really do believe ducks are very smart birds and as their owner or someone they have imprinted on, they will always remember you when you show up.

How do I know if my duck is happy?

Like I mentioned earlier, ducks are very friendly and social animals

When a duck is happy, they bop their heads up and down, quacking excitedly and making a lot of noises.

Most times the source of their happiness is usually when they see someone they have not seen in a long time, when you give them treats, when they have clean and fresh water to bath with or even when they have a pool party with their friends

If you see a lot of head bobbing going on, then you have one happy duck.

Which is the friendliest duck?

There are lots of duck species out there but the friendliest duck is the white pekin ducks.

These birds are an absolute beauty and very friendly ducks

They are known to have originated from Beijing, China and are mostly reared for their meat.

They are calm, hardy birds and they make for excellent pets.

They are very docile, friendly and can lay between 150 to 200 eggs every year.

They are Pure white with yellow bills and feet, Pekins have beautiful dark blue eyes.

They are also considered “heavy” ducks, weighing between 8-9 pounds and are content to forage on the ground for grasses, weeds, bugs and worms.

Do ducks bite to show affection?

Male ducks, also called drakes will sometime bite on the female ducks to show affection and to flirt with them

This behaviour is strictly between two ducks

A duck biting on a human is a sign of aggression and sometimes a duck can display this aggressive behaviour.

This usually happens when the birds are hungry or dirty and they are simply seeing an unfamiliar face.

Ducks are generally friendly and social birds and biting people is not one of the ways they show emotion.

How do you get your duckling to trust?

Getting ducks to trust you can be a bit difficult especially if they have not imprinted you. 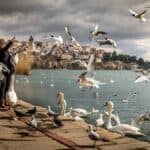 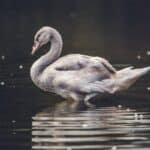