Most eagles are diurnal in nature which means that they are active during the day and sleep at night. Eagles sleep standing perched on a tree branch or anything that can support their weight.

They tuck their head into their feathers to stay warm over the night. Most eagles hunt during the day and are ready to go to sleep by the time the sun is down and as such they are up with the sunrise.

Eagles sleeping habits have been studied by animal researchers and we will explain how eagles sleep, when they wake up, if they sleep in their nest amongst other interesting eagle sleep facts.

How Do Eagles Sleep?

When eagles are ready to go to sleep, they perch on a tree branch most often on the tree where they have their nest.

Some eagles might also sleep laying down especially during breeding season and incubation of the eggs.

The eagle has to lie over the eggs even at night and as such has to sleep laying down.

When going to sleep, the eagle tucks its head into it’s feathers to stay warm all through the night.

Most eagles sleep close to their nests, however if an eagle’s nests it’s destroyed or it is migrating it would sleep in a place where it finds comfort.

When wintering, eagles will gather to roost at night, they choose trees which afford them protection from the elements.

Even though they migrate alone, they can travel miles to established roosting sites and they can be seen gathered in their hundreds.

Related: Here is an article I wrote on eagles hunting at night

Do Bald Eagles Sleep At Night?

Bald eagles sleep at night as they are predominantly diurnal in nature. Most bald eagles usually sleep between early nighttime and are awake with the sun.

Like most birds, bald eagles do not sleep deeply like humans and during the course of the night they sleep in short bursts or durations till its morning and they have to get active.

This behavior enables them to be alert to any intruders or attacks during the night.

Though some have proposed that they are able to sleep much easier than smaller birds who have to worry about predator attacks, this behavior is still observed in most of the species.

Bald eagles can sleep standing up or laying down. They have reflex tendons on their feet which grips and locks on to a branch when they land on it.

This helps them to avoid falling off when they sleep standing up as their weight keeps their legs locked in that position.

They then tuck their head in under their wings and get their night’s rest.

Do Bald Eagles Sleep With Their Eyes Open?

Bald eagles sleep with their eyes closed, most often when sleeping they hide their heads in their wings to remain warm throughout the night.

Eagles do not have to bother about predator attacks because they are top predators and any bird will think twice before crossing them.

It is believed that this enables them to have more restful sleep than other birds. However, bald eagles still do not sleep as deeply as humans.

They sleep in short durations till something startles them awake.

What Time Does An Eagle Wake Up?

Eagles are usually up with the sunrise and they become active from then till about 10am.

Eagles are very active during the day as you can see them flying or hunting during that period.

Once the eagles are up, they get active till about 10 am to get breakfast and other bird activities.

There is an increase in their activities again by late evening and dusk around 4 – 5pm as they try to use the remaining daylight to get their dinner before going to rest in their nests.

Eagles do this because though their eyesight is four times sharper than that of humans by day, they can’t see enough during the night to hunt.

Do Eagles Sleep In Their Nests At Night?

Eagles can sleep in their nests or on branches of the tree where their nests are located. While they are migrating or wintering, an eagle will sleep on a tree branch or any hgh location strong enough to support its weight.

When they are with their mates and the female starts laying eggs, the pair will spend more time in the nest as they will both work to incubate the eggs.

At night, the female has to continue sitting on the eggs so she will sleep in the nest all through the night.

Both parents will remain in the nest after the eaglets are hatched to take good care of them.

However as the eaglets mature, the parents start giving them space and spending more time on tree branches close to the nest to keep an eye on them.

After raising a clutch of eaglets, the adult eagles do not make use of the nest till the next breeding season. They go away for winter then come back to repair the nest before the next use.

How Many Hours Do Eagles Sleep?

Most eagles are in their nests by 6pm and are asleep by 8 or 9pm. They are also up with the sunrise and thus can get about 10 to 12 hours of sleep per night.

Unlike humans, eagles do not have lengthy sleep but sleep in short durations till morning.

They can move around in the middle of the night or wake up quickly when disturbed by something.

It is important that eagles get their required sleep as this can affect their behavior and activeness during the day.

An eagle that doesn’t get enough sleep can be disoriented during the day and might be prone to accidents.

Also, not getting enough sleep directly affects the egg quality produced by the female.

Do Eagles Sleep Standing Up?

Yes, eagles can sleep both standing up and laying down. Eagles spend a lot of time on tree branches especially when they have growing eaglets in their nests.

It is not difficult for eagles to sleep standing up as once they land on a tree branch the flexor tendons in their legs grip the branch and lock their toes on to.

They tuck their heads in and off they go to sleep.

This helps them stay upright while sleeping perched so they do not have to worry about falling off.

While raising baby eagles, the adult eagles tend to spend less time in the nest to give the growing babies space.

They are able to watch them perched on the branches and will also sleep there before the juveniles are large enough to leave the nest.

Do Eagles Sleep In The Same Place Every Night

Depending on the time of year, eagles can sleep in the same place or in different locations.

During breeding season, eagles will sleep in their nests or close to their nest to keep an eye on it and on their young fledglings.

However, when it’s not breeding season eagles will spend their time alone and can sleep in different locations during their migration.

If an eagle’s nest has been destroyed, it gets disoriented and will sleep in different places at night.

During the wintering season, the eagles can travel miles to get to their congregational roosting sites.

These roosting sites have been established and usually offer them protection from heavy winds and rain.

The sleeping habits of eagles have been studied by humans over time and we know that eagles can sleep both lying down and standing up.

They are comfortable sleeping perched on tree branches as they have flexor tendons in their feet which locks on to the tree branches and ensures they do not fall off while asleep. Eagles mainly sleep in their nests during the breeding season.

Outside of that they sleep away from the nest and only come back to repair and rebuild the nest for the next breeding season. 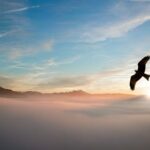 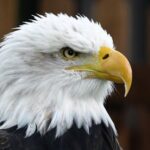