Hummingbirds have a unique technique of mating.

Male hummingbirds begin courting their female counterparts as soon as the females have arrived at the feeder site.

The ritual’s key component is a frenzied, acrobatic takeoff.

Apart from flying in loops and zigzags, males would soar 50-150 feet in the air before crashing straight down to the earth, pulling themselves up just before contact.

Singing, fluttering their wings rapidly, and showing off their feathers (particularly in the sunlight) are other displays male hummingbirds use to attract females.

Hummingbirds must eat their body weight in nectar every day, so they require a lot of food sources.

How Do Hummingbirds Mate?

If the female hummer is into the show, she may start moving around with him in the air.

The females will only accept an attractive suitor and perch on a branch until the male mount them from behind.

They leave each other after around four seconds and never look back. Then, the male flies out to find a mate while the female stays behind to start a nest.

The male will go to great measures just to win the female’s heart. A hummingbird sex ritual includes dancing and singing by the male.

A courtship dive is what he’ll do to impress the hummingbird women. It appears to be a frightening performance, yet it works.

Male birds soar up to 60 feet (18.28 meters) in the air before making a sharp turn and plummeting to the ground in pursuit of females.

At 60 feet, he’ll pull up, fly back to 60 feet, and start all over again till he’s within inches of her head — still going full speed.

As soon as the female is satisfied, she’ll proceed to wait on a perch.

Related: Here is an article I wrote on do hummingbirds smell?

How Do You Know When Hummingbirds Are Mating?

You will know it when you see the male.

The male hummingbirds put on remarkable demonstrations of speed and boldness in-flight maneuvers when they’re courting, which is easy to spot.

What Time Of Year Do Hummingbirds Mate?

The Ruby-Throated Hummingbirds start mating in early spring once they return from their migration from Mexico and Central America.

While other species like Anna’s Hummingbird begin mating in late December or early January and continue until March or April—when it comes to mating, there are in-between times and never a set date.

Hummingbirds often pair after returning from migration and when the weather is warm enough for plants to thrive, giving them a steady food supply.

Do Hummingbirds Mate In The Air?

Considering hummingbirds’ penchant for airborne antics, you’d be forgiven for thinking that they mate in midair.

Instead, a tree limb is used for mating. The female perches on it while waiting for her partner to approach behind her.

Hummingbirds are masters of perching despite their weak legs and inability to walk or jump.

So they are very good at perching.

How Long Is A Hummingbird Pregnant?

Typically, hummingbirds deposit one to two eggs, with a gestation period of 16 to 18 days.

Generally, there is little interaction between the female Ruby-throated Hummingbird and the male after mating.

Instead, she chooses an appropriate location for her nest (often on a small downward-slanting branch hanging over a clearing or a stream, but sometimes on a large horizontal branch).

She then spends many hours gathering spider webs and plant parts, which she weaves into a small cup with an inner diameter of about 4cm and a height of 6cm.

The nest is covered with soft plant down and decorated with flecks of gray-green lichen that blend in seamlessly.

The female then lays the first of two pea-sized (8mm x 13mm) white eggs within a few days of building the nest.

The female-only lays two eggs and never three because that’s the only amount she can care for at that moment.

Having three will be tasking and can result in the death of all the chicks.

The bird incubation period lasts 14-16 days, or up to 21 days in cool conditions, during which time the female spends roughly 50-55 minutes of every hour on the nest.

Eggs are 2cm long when they hatch, altricial (naked), and have tiny bills.

How Do Hummingbirds Find A Mate?

The male of the species attracts the female with aerial displays before mating. Hummingbird females are choosy in who they mate with.

For example, during mating season, male hummingbirds will gather in groups to serenade the female in an attempt to woo her attention.

The courtship dive or other midair dance signals to the other birds that she’s interested in them.

How Many Times Do Hummingbirds Mate In A Season?

Hummingbirds can only mate a certain number of times every season.

Females can produce up to three broods per year during the hummingbird nesting season, resulting in up to six eggs/offspring per year.

Do Hummingbirds Mate On The Ground?

Hummingbirds do not mate on the ground. Instead, they actually do perch on trees to mate. Their mating doesn’t last more than 4seconds.

Hummingbird males are born without a penis external.

As a result, in order to reproduce, a male bird presses on the female’s posterior orifice (cloaca).

This is how male sperm is transferred to female eggs for fertilization.

The species’ females are invariably the ones who select the males they want to mate with.

The male hummingbirds will put on a spectacular airborne display to woo her, competing with one another to outdo the other.

The mating process barely lasts three to five seconds once the female has decided, and then the male flies off to start the process all over again. 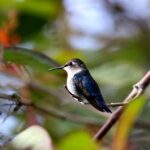