No matter how safe a country may be, there’s always a need to acquire some self-defense skills.

This is because unknown attacks can occur at any time and you might have to defend yourself while awaiting help.

Similarly, in the animal kingdom, there’s always a chance that a predator may strike an animal.

And of course, it’s expected that the animal whether small or big, would do whatever it takes to protect itself.

Animals spend a lot of time keeping an eye out for predators and trying to avoid them. Interestingly, every animal has natural survival mechanisms that protect them from predators.

But what about ostriches, how do they protect themselves? What survival mechanisms do they employ when faced with danger? Let’s answer this question.

How Do Ostriches Protect Themselves?

1. They take to their heels

When you think about running speed, a bird wouldn’t naturally come to your mind. However, ostriches have broken that record.

Ostriches, despite being flightless and the heaviest bird in the world can move fast.

The fastest ostrich can run up to 44 mph which is about 70 km/h. Still, wondering how their legs are a defense mechanism?

Well with this incredible speed, an ostrich can outrun most of its predators, especially humans. They can cover great distances with little or no effort.

Ostriches have the longest legs amongst birds.

They considered to be are the fastest birds in the world. A lot of times the inability of a bird to fly is seen as a disadvantage to them.

However, this is not the case with ostriches, in place of powerful wings they have powerful long legs.

2. They kick and match

Kicking is an ostrich’s major defense mechanism when they are faced with attacks from predators that they cannot avoid.

Ostriches can kick with a force of about 2,000 pounds per square inch

The feet of an ostrich are so strong with two sharp claws on each foot which are used for defense.

Their massive leg muscles enable them to deliver a powerful kick which could seriously injure or even kill a predator.

Ostriches are the only birds that have two toes per foot.

Incredibly, this helps them to run faster. Their largest toe is positioned on the inside of the foot and the smaller toe is on the outside.

This adaptation helps to give the ostrich an excellent balance when running.

Their big toe also has a very large, sharp nail which provides additional protection against predators, intruders, or opponents.

However, Ostriches can only kick forward, this still comes as a shock.

But, it is a fact, this is because their legs can only bend forward.

In clearer terms, since these birds are unable to kick backward, it’s hard for them to defend themselves when attacks come from behind.

Here is an article I wrote on how do ostriches survive?

3. They peck with their beaks

In addition to an ostrich powerful kick, they can also peck at their victims with their beaks.

The beaks of a bird aren’t only useful for eating. It is also a defense mechanism.

Their pecks can result in serious injuries and in worse cases, it could lead to death.

It’s not conventional for animals to be involved in the popular hide and seek game but ostrich are an exception.

In cases when an ostrich does have the option of running or fighting back for protection, they engage in peek-a-boo.

Usually, when an ostrich sees danger from afar, it hides to protect itself.

The ostrich will often lie low to hide, stretching its neck along the ground. Its feather colors blend with the sandy soil where it lives.

At this point, the ostrich is invisible to predators. From a distance, it may seem like the ostrich has buried its head in the sand, but that’s not the case.

5. They are good observers

Ostriches observe their environment with the aid of their eyes and long neck.

The eyes of an ostrich are very sensitive that they can see a moving object about the size of a big dog as far as 3km away during the day and 50meters at night.

The ostrich has the largest eyes of any land animal and their eyes measure about 5cm across.

Although ostriches aren’t considered one of the smartest animals, this is because their eyes are bigger than their brains.

The ostrich also has a long neck which also helps it spot predators.

The ability to observe their environment will determine their next defense step, either to hide, run or fight back.

6. They live in groups

Ever heard the quote that says you have more eyes when you aren’t living alone? Well, these birds are a perfect description of this quote.

They are typically found in flocks of 10 birds, most times; you may see these birds in a pair of two, a male and a female. Ostriches also gather in large flocks of 100 or more sometimes.

These groups have a pecking order with a dominant male, a dominant female called the “main hen” and several other females.

The dominant male establishes and defends their territory.

Their long necks and amazing vision allow them to see far distances. One ostrich can warn others when a predator approaches.

Also check out this article I wrote on how do ostriches survive in the desert?

7. They use their feathers

Protection from predators isn’t all there is to ostriches protecting themselves. They also need to protect themselves from harsh weather conditions.

They do this with the aid of their feathers which are adapted to help them regulate their temperature.

The structure of an ostrich feather is different from flying birds which have tiny hooks to lock them together during flight.

The feathers of an ostrich can be used to help the birds cool down.

To do this ostriches contract their muscles which raises their feathers from their bodies and increases the air space next to their skin.

This cools the body temperature of the ostrich. When it is cold, ostriches flatten their feathers to improve their insulation and conserve body heat.

They will likely not attack if they don’t feel threatened or provoked. However, when they feel threatened, it can get pretty horrible for predators or victims.

These birds get frightened easily and quickly. They are not very smart, so, if they feel any stress, pain, or threat, they will react accordingly and can potentially hurt you.

When faced with a threat and running is no longer an option, these birds have been known to deliver a kick.

Their kicks are so swift and strong they can knock a full-grown lion unconscious.

There are rare but several incidents of human death by ostrich as well. Mother ostriches are ferocious and protective of their eggs and young ones.

How Do Ostriches Hide From Danger?

When Ostriches are faced with danger, they will lower their heads to the ground in an attempt to blend into their surroundings thus, becoming a lesser target for predators.

These birds do not build nests in trees as flying birds do.

Since they are unable to fly, they make a hole and bury their eggs in the sand.

They routinely use their beaks to check on and turn their eggs, and oftentimes, this gives the impression of them burying their heads in the ground.

What Does The Ostrich Do When A Predator Is Near?

Ostriches are calculative animals, therefore, their actions when they see a predator is determined by the surrounding situation at the time.

Based on this, an ostrich will either run, hide or fight when it is faced with a predator.

When an ostrich senses danger and cannot run away from the threat, it will either hide by flopping to the ground or remain still with its head and neck flat on the ground.

This allows it to blend in with the ground.

However, if he has no other option, then, the attacker has to be ready for a fight.

When an adult ostrich is threatened, it attacks with a clawed foot that delivers a powerful kick.

What Do Ostriches Do When They Are Scared?

When ostriches are frightened they tend to be more aggressive.

In most cases, they will want to attack the source of the scare because they feel threatened.

They may also run away when they feel scared.

In most cases, they will remain still and blend with their present environment.

Yes, Ostriches camouflage. Camouflage simply means to hide or disguise the presence of a person, animal, or object.

Camouflage is not just a defense mechanism amongst military personnel.

It’s is also a defense mechanism a lot of animals adopt and ostriches aren’t exempted.

When they sense danger they lay their head down on the ground, which practice makes them almost invisible, appearing as just another part of the landscape.

No matter how peaceful an animal maybe, when there is a need to protect itself, defense mechanisms shows up.

For ostriches, they may run, hide, or fight to protect themselves from attacking predators. Ostriches aren’t naturally friendly birds, a little scare can cause them to attack.

Precautions have to be taken when dealing with this bird. It’s best to keep a safe distance from these birds as they are capable of hurting humans. 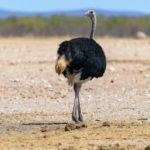 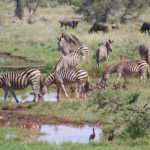