Ostriches are native to Africa and as such they inhabit the hotter climes and regions.

It has been a source of concern whether ostriches survive in cold weather. This is so since they are also exported to colder regions either as pets or zoo animals.

They can thrive in both cold and how weather and research has shown that they can adapt to both hot and cold ecosystems the world over.

This article will discuss how ostriches survive in their habitat, what type of climate they live in, the uses of their feathers and whether they mate in cold weather.

Can An Ostrich Live In Cold Weather?

Ostriches can live in cold weather and they have been studied in several habits.

Ostriches are native to Africa and some parts of Asia. The beautiful thing about these birds is that they can adapt to a range of extreme temperatures ranging from hot to cold.

However, the downside to this is that despite their ability to survive extreme weather conditions, they do not reproduce well in such conditions.

Research has discovered that the number of eggs a female ostrich laid during cold weather was reduced.

The eggs were not as large as those produced in hot weather and were also not as much.

The male of the species are also discovered to have produced much less sperm during extremely cold periods.

This means over a long term period, ostriches might not be able to live long in cold weather. The solution to that is watching out for the animals.

Getting the male at their peak and caring for the eggs laid so that none is lost.

Here is an article I wrote on can you ride an ostrich?

How Do Ostriches Survive In Their Habitat?

Ostriches are native to Africa and can be found in the savanna and desert areas. In the wild, ostriches can be often seen cohabiting with zebras, giraffes, gazelles and wildebeests.

They have learnt to adapt to their seemingly harsh habitat over the years.

Their habitat is open grassland and this provides their food as ostriches are omnivores. They thrive on the plants and also retain water moisture from them.

These birds have quite a number of bodily adaptations which help them in survival and repelling predators.

These outlined behaviors and physical adaptations are some of the ways in which ostriches in the African savannah and desert survive their habitat.

We all know the desert can be a harsh place to live in, however the ostriches have developed a sturdiness towards that.

What Type Of Climate Do Ostriches Live In?

Ostriches live and survive in the dry savannas and woodlands of Africa. They have adaptations such as their long legs and thick feathers for adaptation to this environment.

They can be found individually, in pairs or in large groups depending on what the season is.

The tropical wet and dry climatic type is linked with tropical savannas or grasslands.

Tropical seasonal forests are also widespread, ranging from the equatorial zone’s tropical broadleaf evergreen forest to the subtropics’ deserts along a latitudinal/moisture gradient.

They also often have a thick cover of perennial grasses which flourish during the wet season.

The ostrich is mainly a herbivore i.e. they eat plants and they also derive moisture from those plants.

As such they do not usually have the need to take in a lot of water. Ostriches can go for days without having to drink water.

This is necessary for their survival in a harsh climate.

What Are The Uses Of An Ostrich’s Feathers?

Ostriches’ wings are not built for flying unlike those of other birds. One might wonder exactly what their feathers are useful for.

For one, the feathers are particularly useful during the courtship process.

Together with the tail feathers, they are mostly used for displays and courtship.

Ostriches also have a set of ‘downy ’feathers and these help to keep them warm during the cold and chilly months of the year.

Over the long years, humans have also devised uses for ostrich feathers, and harvesting their feathers is a lucrative business in some parts of the world. Some of the uses include:

In recent years, the use of ostrich feathers has declined as there has been a cry out on their conservation status, however it is still a profitable business in some countries.

Do Ostriches Mate In The Cold Weather?

Ostriches mate in cold weather as well as hot weather.

They are able to reproduce in different types of climates. It has been discovered however, that both the male and the female of the species do not produce well in extreme weather conditions.

Their reproductive sensations are very sensitive to temperature fluctuations.

When it is very cold it is highly possible that females will produce less eggs which are also of a smaller size.

Also the quality of the male sperm is highly affected as they produce less sperm than the usual amount.

This shows that although ostriches might survive in cold weather, they might not be able to survive on a long term basis as they might have fewer babies year in year out.

Research is however continuous on the effects of weather and climatic conditions on our furry friends.

We all love ostriches for several reasons including their gangly look and long legs.

It should not surprise you that ostriches can survive in a number of areas ranging from hot to cold.

The climatic conditions in these regions can range from favorable to extreme. The ostriches have over time developed adaptations which will enable them to survive in that environment.

Some of them include their long legs, big mouth feathers to keep them warm to mention a few.

Ostriches do well in both hot and cold, but researchers have discovered that extreme condition affects their ability to reproduce. 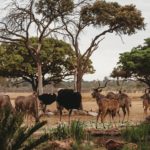 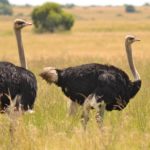