To keep a relationship going, showing affection is important. Animals, like humans, are emotional beings. They express their feelings in a variety of ways.

In general, pets express their affection by becoming excited when they see their owners. They would also welcome their owners with enthusiastic vocalizations. A pet who adores you will constantly want to spend time with you.

Dogs demonstrate their affection by licking their owners’ faces and cuddling them.

What about owls, how do they express their affection? Let’s find out.

How Do Owls Show Affection?

In comparison to other raptors, owls are rather affectionate birds. Isn’t it surprising? Here are some ways owls express their affection:

1. They lean on themselves

This is rather common among birds. Owls are territorial birds. They are also intolerant of other birds and people.

However, they do love their kind. And so when a bond has been created, usually amongst mating pairs, they tend to lean on each other.

This is also referred to as grooming. This is the process where owls bond. Couples usually engage in preening. However, a group of owls can do this as well.

Preening involves owls combing each other’s feathers and beaks. They also enjoy it when humans do this to them.

This is a technique for lowering their degree of aggressiveness. Especially when it comes to reciprocal grooming between two owls.

Bill fencing is another activity that owls indulge in. This is usually a courting ritual amongst owls.

However, this vital pair-bonding ritual isn’t often linked with courting alone. It can also happen amongst siblings.

These actions, together with tongue clicking, are key bonding skills in the repertoire of an owl.

However, this activity usually occurs before courting. It also denotes the formation of a new monogamous owl couple.

The male owl would usually deliver prey to the female owl as a show of his love. How adorable.

These males know how to get the females’ hearts melting in love.

They usually carry their gifts in their beaks. While delivering his gift to his heartthrob, the male owl may be seen with his wings spread and flapping. Aren’t they wonderful examples of gentlemen?

Older owlets have been spotted in the nest attempting to feed their younger siblings. These birds are, without a doubt, are responsible birds.

Related: Here is an article I wrote on why owls usually come out at night

How Do You Tell If An Owl Likes You?

Owls are more sociable than other prey birds. However, this does not apply to humans.

As previously noted, owls are not particularly tolerant of humans. They cannot be good social partners to humans.

Owls dislike having physical contact with humans. Unlike other friendly birds, these birds do not like cuddling humans as well.

This is because humans are seen as one of their predators. However, all hope is not gone.

These birds can show a little fondness towards people. You might be able to run your hands through an owl’s feathers. But that’s about it for them.

So, if you fall into that group, there’s no need to be worried. There are methods to make your owl like you.

Spending more time with them is the greatest approach. Petting them is another effective approach to win their affection.

It also helps to communicate with them regularly. It acquaints them with your voice. Forget about whether or not they comprehend. Just keep talking.

You will be able to earn its trust and be physically intimate with it if you use these techniques.

But, these techniques will be more effective when an owl is tamed from a young age.

Although, it requires legal permission to lawfully keep owls as pets.

Do Owls Enjoy Being Petted?

Owls do not generally love being petted by humans. However, this is somewhat depending on how it is reared.

Most owls in the wild dislike being touched by humans since they are not used to it.

Owls grown in captivity, on the other hand, may enjoy being petted. This is because they have been taught in this manner.

However, they are typically fond of people with who they are familiar. So, you may have to spend time with them more often.

Owls are not known to cuddle. Owls, unlike dogs, are not domesticated animals. They are raptors and wild birds.

The birds hunt and live mostly alone, as do many raptor hunters. They also lack the flock instinct that makes certain bird species, such as parrots, such good pets.

Owls do not tolerate cuddling or close contact with humans. This is because it goes completely against their developed nature.

Owls are birds that evolved to seek and kill tiny prey, not to amuse human owners in their homes.

Their razor-sharp talons are intended for piercing and cutting. They are not for perching on human shoulders.

If you are unfamiliar with how to deal with these birds, you may be attacked by them.

However, owls may be affectionate with their partners and fellow owls. When it comes to their species, they show greater emotion.

Are Owls Friendly To Humans?

Owls are not friendly to humans. These birds are solitary birds. They are self-sufficient wild birds. But, they are very sociable with their kinds.

However, when it comes to people, they do not show any form of friendliness.

No wild animal will express affection to a person, nor will it come to be petted.

In reality, most wild animals dislike being so near to people. Humans are seen as a threat by them.

Owls prefer to avoid being in the company of other animals and humans as well. They would rather prefer to be alone.

Most owl species are active at night and rest throughout the day. This makes it difficult for humans to relate to them.

There is very little possibility that you may come in touch with an owl. Because you’d most likely be sleeping when they’re active.

Captive owls, on the other hand, maybe trained to be friendly to people. The taming procedure allows them to become accustomed to their owner.

Owls may experience affection, although this is generally a mating behavior characteristic.

Although most owls are monogamous, they may continue to engage in loving bonding rituals with their partners while raising a brood.

As previously established, owls only exhibit affection to their partner or siblings. In most cases, humans are excluded from the equation.

This is because owls do not normally exhibit affection to people.

Do Owls Fight Each Other?

Yes, owls can fight with one another. Animals do have grudges to settle from time to time. And many times, all they need to do is show each other who’s boss.

However, owls may fight as a result of competing over territory. During mating seasons, they may also be quite territorial.

Conflicts for territory may undoubtedly lead to owl fights, and it is quite common.

They could also get into a dispute over food. If two owls are hunting in the same location, they may have a prey conflict.

Although this does not happen very often. It only happens when there is a disagreement about prey or hunting areas.

Owls are violent animals. As a result, if they get into a battle, they may cause a lot of harm to one other.

Purr is a low continuous vibratory sound that expresses happiness. It’s most commonly linked with cats. However, purring has been noticed in owls as well.

When owls are happy, they would likely emit this sound. This sound is also used by males to encourage females to investigate a nest location.

Females, on the other hand, utilize it to beg for food from males.

However, this is only one of the sounds made by owls. Owls also produce a particular sound known as hooting.

They will usually resume their hooting before sunrise.

Screeches are also made by owls. They generally produce this sound when protecting themselves against predators.

Owls, also bark. They do this when they are scared or shocked. Frightened barks can occur at any time of day or night. This is determined by when the owl perceives a threat.

Owls are also known to growl. This is generally a result of predator threats.

Owls are birds of prey, yet unlike other birds of prey, they are highly emotional. These birds express their love by leaning on each other, bringing food to their spouse, preening, and bill fencing.

However, they only express such affections to those of their species. They are not naturally friendly to humans.

Humans are seen as predators by them, and they will most likely avoid humans. Nonetheless, with lots of training, they may feel at ease with their owners. 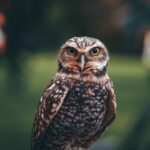 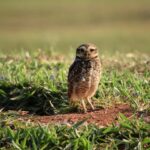