Bumblefoot is an infection on the flippers of ducks.

It is caused when cuts or scrapes get infected by bacteria. The cuts become red, swollen and the skin around the wound becomes thick. The flippers also become filled with pus.

Bumblefoot do not only affect ducks. It affects birds, rodents and rabbits. When it affects rabbits, it is called “sore hocks”.

There are several stages of bumblefoot in birds.

✓ When a bird perches for too long or perches inappropriately, its feet can become reddened or have a shiny patch. Fortunately ducks do not perch so your ducks are in no danger of this.

✓ A cut or wound on the feet or flippers of your ducks can get infected by bacteria like staphylococcus. Make sure you begin treatment immediately for that duck in order to stop the infection from spreading. This is the second stage.

✓ When the infection progresses, the foot, flippers or toes of the duck can become distorted and seriously damaged. This stage is severe and can lead to surgery or amputation.

You can avoid this by making sure

✓ sharp rocks, nails or metals are removed from your duck pen and your duck run.

✓ your ducks are constantly checked for cuts and scrapes.

✓ all cuts are treated immediately.

✓ your duck beddings are changed regularly to avoid infection.

You can soak the foot of the duck in warm water and Epsom salts till it becomes tender, remove the scab, coat with iodine, dry the foot off and then spray it with Vetericyn and wrap it up.

You can wrap with a bandage or vet wrap. Do this till it heals.

2. If the infection is bad and the flippers is all swollen, you have more work to do.

Soak the foot in warm water and Epsom salts, wait till it gets tender and remove scab, then remove the pus at the center of the growth.

Remove as much pus as possible, disinfect the foot with iodine solution, then spray Vetericyn on it.

Keep the duck from swimming so the medication won’t be washed away.

Do this until the duck stops limping and the infection is gone.

3. If the infection keeps getting worse and spreading to other areas, take the duck to the vet.

They know better than you. They’ll know what to do.

Can bumblefoot go away on its own?

No, bumblefoot cannot go away on its own.

It has to be treated.

You can’t discover your duck has bumblefoot and decide to ignore it, hoping it will be go on its own. No. You have to treat it. It is an infection and infection don’t just go on their own. In fact, they will spread and become worse. It is better handled fast and with care.

Can bumblefoot foot kill a duck.

Yes, bumblefoot can kill a duck.

Bumblefoot is a serious infection that makes ducks go through terrible pain and suffering.

If not treated immediately, it will spread to other parts of the feet.

From the flippers to the toe nails and so on. It can also spread to other tissues and bones.

When the infection gets to the bone, it becomes worse because their bones are hollow.

If you don’t want the duck to die, you could get the foot amputated. Scary right? You could also arrange for a surgery which will cost you a lot of money.

The other alternative is to put the duck to sleep because the duck would be going through severe pain.

So bumblefoot do kill ducks and in a severe way.

Can humans get bumblefoot?

No humans cannot get bumblefoot.

Humans can get infected and their wounds get worse but it isn’t bumblefoot.

While treating your ducks of bumblefoot, you are in no danger of getting it.

However, you still have to be careful and maintain a good hygiene as it is still an infection and infections are not good.

While soaking their feet in Epsom salt, removing dead tissue and pus, try to use gloves.

After you are done, disinfect the surface area used.

When cuts and scrapes on your ducks’ foot are left untended, they become infected by bacteria.

This is called bumblefoot. Bumblefoot causes extreme pain to ducks.

Their foot become red, swollen and filled with pus.

The ducks affected begin to limp or refuse to walk.

To avoid this, make sure there are no sharp objects that can cut your ducks in their feet.

Plants with thorns should not be planted or uprooted when seen. Constantly check your ducks for cuts on their feet and treat immediately if seen before it gets infected.

Make sure your ducks’ coop is always neat so that cuts on their feet will not get infected.

Ducks can die from bumblefoot so treat as urgent when noticed.

Humans cannot get bumblefoot but adequate care should be taken while treating your ducks of bumblefoot.

It is after all still an infection. 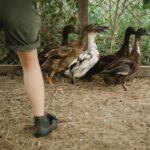 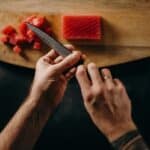