Fruit flies are popular household pests that are most noticeable in the late summer and early fall.

Although they are not harmful to humans, they are known for causing a nuisance in the home.

Carnivorous plants are a good and natural way to get rid of these household pests. Because of their ability to consume insects, these plants are also known as killer plants.

The Venus Fly Trap is well-known for its carnivorous feature. This flowering plant has a trap that is made up of two hinged lobes.

These lobes are located at the end of each plant’s leaves.

The hinged traps have small bristles that interlock when the trap closes. This keeps the prey trapped, leaving no room for escape.

Although some of its nutrients come from the soil, this plant diets on insects such as ants, mosquitoes, spiders, beetles, grasshoppers, and other flying insects.

It is capable of catching about 3-4 insects. The trap plant, however, has a short lifespan; it passes away after catching three or four insects.

Butterwort is also referred to as flypaper traps.

This carnivorous plant thrives in full sun to little shade and enjoys feeding on insects.

Although this plant is mostly found in the United States, it can also be seen in some parts of Europe and Asia.

This plant produces sticky fluids on its leaves, which draw unwary insects. The leaves slowly curl around their prey when they capture it, then they begin to digest it.

These insects act as a supplement to the inadequate mineral nutrition that comes from their surroundings.

Typically, they consume vegetation from fens, bogs, and moist heaths, but these habitats lack sufficient nutrients for this plant to thrive.

As a means to supplement its diet, it developed this carnivorous nature.

Despite going into dormancy every spring, this plant is a great fruit fly eater.

Its dormancy period enables the plant to grow and bloom again; you can help this process by chopping off the dead leaves in the early spring, late winter, or early spring.

Here is an article I wrote on plants with spines

Because these plants look their best in direct sunlight, they are commonly referred to as rainbow plants.

Most of these rainbow plants can be found in Australia and New Guinea. It is a fantastic choice for reducing mosquito populations.

The glandular hairs on its leaves secrete a mucilage substance, which they use to entice tiny insects like fruit flies, mosquitoes, ants, and so forth.

The moment its prey touches the secretions, they become trapped.

However, rainbow plants are unable to move their leaves or tentacles themselves, so it is categorized as a passive flypaper trap. Strong insects will find it easy to escape the trap as a result of this.

Despite being one of the easiest carnivorous plants to grow, slugs, snails, and dump-off fungus typically prey on them.

So, it’s important to take precautions to keep these pests away from the plant.

This plant is known for its tiny bladders. It is one of the best aquatic carnivorous plants, mostly found in the Northern Hemisphere.

It has yellow, two-lipped flowers, which have a forward-facing spur on the lower lip.

This plant has a long, horizontal stem, which can be about 4-10 inches high and 8-80 inches long.

This plant is distinguished by its tiny bladders. It is one of the best aquatic carnivorous plants, mostly found in the Northern Hemisphere.

It has two-lipped yellow flowers with a spur on the lower lip that faces forward. This plant has a long, horizontal stem that can reach heights of 4-10 inches and lengths of 8-80 inches.

Bladderworts use the hair at the bladder opening to draw in their aquatic prey.

Because its hair is normally touch-sensitive, when an insect perches on it, the bladder inflates abruptly.

The prey is then drawn into a locked door by the water.

This exceptional pitcher plant known as the Australian Pitcher Plant is found naturally in damp, sandy, or swampy areas of southwestern Australia.

It is a difficult plant to grow and if exposed to overly warm conditions, it can die suddenly.

Like all carnivorous plants, Australian pitcher plants eat insects to supplement the inadequate nutrition they receive because of poor soil conditions.

Several smooth, dark red rings adorn the pitfall; they produce delectable nectar and serve as a trap for ants, fruit flies, and other insects.

It also has regular leaves in addition to those that have been altered to serve as pitfall traps. This plant is renowned for having a variety of tight rosette-like traps.

These are roughly 25-2 size traps.

Another killer plant with incredible fruit fly-eating abilities is the trumpet pitcher. This North American carnivorous plant is simple to grow.

Additionally, this plant is temperature-tolerant which makes it easy to maintain.

Through its nectar, the trumpet pitcher entices hungry insects to their trap. Typically, the insects stick to the nectar and get trapped.

This plant is an outdoor species, so if you plan to grow it, make sure it gets enough sunlight.

Its enticing, sweet mucilage draws prey to the plant. A sundew has protruding tentacles with nectar tips that cover its leaves.

This nectar’s strong adhesive properties trap the troubling insect. The leaf gradually curls around its caught prey as they try to escape.

These regions are typically deficient in organic nitrogen and phosphorus, which causes the plant to display its carnivorous nature.

The lobster pot gets its name from the pots used by fishermen to catch lobsters.

This plant uses its lobster pot as a trap. This trap is primarily found in corkscrew plants. And they are also excellent fruit flies catchers.

This plant has a distinctive method for capturing its prey.

They have a Y-shaped leaf that helps them catch prey that falls into the lobster pot.

Furthermore, their inward-facing hair forces the prey deep inside the trap, leaving no room for escape.

The catapulting flypaper trap plant is very similar to a catapult and the flypaper properties of the Venus Fly Trap.

However, it is a viable option for ridding your environment of fruit flies.

To catch its prey, the plant employs tacky arms. When it reaches out for the insect, it engulfs it and squeezes the insect’s appendage.

This process produces a sling impact, which tosses the prey into the plant’s center, where it is digested.

Dewy pines thrive in harsh conditions and require a large earthenware pot to grow, which takes up a lot of space.

This fruit fly eater may not be suitable if you have a very small space.

This plant, on the other hand, is very effective at keeping fruit flies and other insects away from your garden.

It is covered in slimy glop, which attracts prey. When an insect perches on it, its long, thin leaves curl up, allowing it to trap the insect and digest the captured meal.

It is indigenous to northern Morocco, Portugal, and southern Spain. Their woody stem is similar to that of a small tree.

Because this killer plant is drier than most carnivorous plants, it does not require frequent watering. This makes it simple to care for.

There are several other natural ways to get rid of fruit flies, but carnivorous plants are one of the most effective.

These plants are found in environments with little or no nutritional value. As a result, they feed on insects to supplement the insufficient mineral nutrition provided by their surroundings.

Some of these plants use nectar to attract their prey, while others, such as lobster-pot, use their pots to trap insects.

Sundew plants, on the other hand, are the most effective at repelling fruit flies. 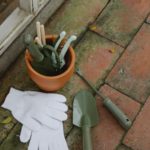