There are different varieties of plants with spines, some have spines on their leaves while others have spines made of modified leaf stipules.

Leaves that have spines are not capable of photosynthesis and at maturity these leaves’ spines become dead.

Some plants have been converted into spines as in the case of cacti.

Spinose structures are hard and rigid extensions of either leaves, stems, roots, or buds with sharp, stiff ends and their general function is simply to deter animals from eating the plant material.

The Cactus plants are slow-growing but they are self-sufficient as it stores moisture in leaves, roots, and stems.

They are succulent perennial plants and they generally have thick herbaceous or a woody chlorophyll-containing stem.

They are native through most of the length of North and South America.

Cacti are distinguishable from other succulent plants either by spines or barbed bristles.

In most cases, the cactus plants are absent leaves or they are modified as spines, minimizing the amount of surface area from which water can be lost.

The tropical genera Pereskia and pereskopsis have vines that have conventional-looking functional leaves.

The spines also act as a defense mechanism to discover herbivores from eating the plants, they also serve as shades for the plants from the sun.

In different tropical areas, Pineapples are used to make a strong and secure hedge, it is a tropical plant with a delicate aroma and a sweet taste.

In the pineapple plant apart from being a fruit, the leaves have been discovered to have bioactive compounds and they are often used in the treatment of some conditions like the common cold, diabetes, and heart conditions among other conditions.

The pineapple leaves are rosette waxy and long pointed, it grows between 20-72 inches long with sharp, up-curved spines on the margin.

As with most plants, the pineapple spiny leaves are naturally rigid to prevent herbivores from feeding on them.

Billbergia is a genus of plant species that are native to tropical areas of America.

The leaves of the Billbergia plants are robust and have great intensity in green color similar to that of its stems and have great robustness and an elongated shape, the leaves have small but powerful spines around them.

The leaves have a composition that gives rise to a cup in the center that serves the plants as a source of water since it is used in collecting all the rainwater.

Depending on the particular specie of the plant, its flowers are very particular and can present a range of very varied colors and great ornamental richness

But in essence, the colors of the flower have something in common and it is that they are very vivid.

Here is an article I wrote on plants with religious significance

The prunus Spinosa is also known as the Blackthorn is a species of spiny flowering plant or shrub in the Rose family.

It is native to northwest Africa, western Asia, and Europe.

It is a large deciduous plant that grows up to 5 meters with blackish bark and dense, stiff, spiny branches.

The leaves are oval, broad with a segregated margin.

Blackthorn grows as a bush but can grow to become a tree to a height of 6m, its branches usually grow forming a tangle.

The flower and berry of the plant are used as medicine, they can be used to treat ulcers, fluid retention, constipation, kidney, and bladder problems, and stomach aches as well

The Opuntia plant or the prickly pear as known popularly is a genus of flowering plants belonging also to the cactus family,

they have shallow roots that help them in retaining rainwater and excess rainwater is stored in the pads of the plant.

All of these help the plants to adapt to long periods of heat and drought, the prickly pear is also more tolerable than any other type of cacti.

The species have not been known to live longer than 20 years, the opuntia has very unique features and shape.

They have got a soft airy appearance but it is most times feared for their prickly vines.

You can plant it either in a garden or plant it along a property line to prevent passersby from entering.

The crown of thorns or Christ’s thorn is a thorny plant of the spurge family,

it is native to Madagascar and it is popular as a houseplant, it is mostly grown in warm climates as a garden shrub, it is plentiful in wintertime although flowering is year-round.

It is a hardy perennial plant with stout gray thorns and oval leaves, it has a sprawling, branching vine-like stem that attains a length of more than two meters.

7. Oregon Grape as a Plant with Vines

The holly-leaved barberry or Oregon grape is a specie of flowering plant native to western North America,

the bark, root-like stem, and roots are used mainly in making medicine and the grape is used for scaly, itchy skin, and other conditions including stomach problems.

You can eat the fruit from the Oregon grapes but do know it tastes nothing like grapes but tastes tart instead.

It has a broadleaf that is evergreen, it grows well in shadier parts of the soil, and it is attractive and also drought-resistant.

Also check out this article I wrote on plants with rhizomes

The Delairea is a plant genus within the Asteraceae family that is native to South Africa.

It is originally used as an ornamental plant on trellises and ground cover, because of its invasiveness it is no longer being cultivated.

The vine will climb up trees and can reach the height of 2-4 m though it can also form a mat. It releases an odor when flowering and also when crushed.

The Senecio Tamoides is also known as the Canary creeper is a climbing member of the genus Senecio that is native to Southern Africa,

it is used as an ornamental plant for its showy yellow daisy-like flower in the autumn.

It is mostly an evergreen perennial climber with semi-succulent stems and leaves that creeps along the grounds or climbs several meters into the trees to be able to reach the sunlight canopy where it can flower.

Its stems are slender and it is usually purplish, semi-succulent, and hairless that has clear and sticky exudates.

The leaves are bright green, shaped like many ivies, and lobed with venation with broad, oval, and fleshy surface

The Alludia Procera Plant is a member of the Didiereaceae.

It is a spiny xerophytic shrub or small tree with small, drought-deciduous leaves native to Southern Madagascar.

It conserves moisture during droughts by shedding its small leaves.

Plants having vines have more access to reach sunlight without expending much of their energy.

There are different plants with different varieties of vines located in different places on the plant body with some on the leaves while others on modified leaf stipules.

Some plants having vines are not even capable of photosynthesis and at maturity, some of these leaves vines die off. 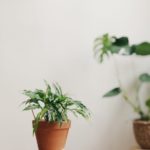