Donkeys are known for their peculiar sounds known as brays which people sometimes mistake for laughing.

Donkeys bray when they are communicating with each other, they bray as a warning or when they feel panic among a host of other reasons.

The bray is a loud sound made by a donkey for communication with other members of its species.

New donkey owners have reported their donkeys making this loud sound on different occasions and have wondered at the reasons behind it.

This article will endeavor to explain why donkeys bray, how they do it, when they do it and how to stop your donkey from braying.

Why Do Donkeys Bray?

Braying is a loud sound developed by the donkey’s ancestors to call to each other across the wide expanse of the desert.

Braying which is usually typified by the loud ‘hee-haw’ sound is one which donkeys are known for.

In the past, humans mistook the sound for laughter. Braying is not laughter though horses can bray when they are happy.

Some of the instances in which donkeys bray include:

Related: Here is an article I wrote on how do donkeys sleep?

Do Donkeys Bray When Happy?

Donkey pet owners have also reported that their pet donkeys bray when they sight them as a sign of affection.

Braying is a means of communication for donkeys and they can showcase this by braying when they are happy or excited about something.

The hee-haw sound is  vocalized during the intake and outtake of air. A happy donkey will bray especially when with other donkeys or it’s favorite humans.

However changes in braying length can signify that the bray is meant to communicate something else such as danger or panic.

Female donkeys bray however they are much less vocal than their male counterparts. When observing the donkeys daily, you will notice the jennies are much quieter than the males.

Male donkeys usually bray loudly during mating season to get the attention of the females which is their form of communicating their desire.

Jacks who are more aggressive in nature might bray more regularly as a sign of territoriality. They also bray to warn of danger or when they are stressed and bored.

Miniature donkeys are a type of donkey that are smaller in size than the standard sized donkeys.

Mini donkeys are usually kept as pets though they can be used as guards for smaller animals or livestock.

Miniature donkeys usually reach a height of 36 inches and can weigh between 200-400 pounds. However they are not bred down for that, that is their natural size.

Some donkey owners have claimed they even bray more regularly than standard sized donkeys especially if they have got a mouthy or noisy mini donkey.

Mini donkeys might not be able to bray as loudly as a normal sized donkey because of their sound, they can still make a louder sound than most farm animals their size.

Why Do Donkeys Show Their Teeth?

Donkeys aring their teeth is another behavior which has been observed by humans. When a donkey bares its teeth it is most likely trying to scent a new smell.

By curling back its lips the donkey is able baring their teeth is another peculiar behavior that has been observed in do keys over time.

This showing of their teeth is known as the ‘flehmen response’ and has been observed in other mammals and hooved animals.

Donkeys show their teeth to recognise new smells around them. They peel back their lips and curl them.

Humans form memories associations this way and researchers have suspected this method is  similar to the human system.

Donkeys use the flehman response to get themselves acclimatized with a particular new and interesting smell.

They can be seen smelling a new friend which they establish through the pheromone signals. They also smell their food and the hormones in urine.

Other than the flehman response, other reasons your donkey might be baring its teeth include:

How To Stop My Donkey From Braying?

Donkey’s loud braying can be a nuisance to owners and other neighbours especially if you don’t live out on the farmstead or you live in a city.

Knowing why your donkeys bray and when they do will help you train them to reduce these loud vocalisations.

Some donkey owners have considered getting motion sensor lights to scare away predators.

Donkeys are known to bray loudly when they encounter a predator and by installing the motion lights, they will scare away the predators before the donkeys notice them and bray loudly.

Lonely donkeys are also known to bray loudly for attention and you can reduce this by getting your donkey a companion.

Also ensure their food is given to them at regular hours. The donkeys will bray loudly when they are expecting food especially when they have been used to eating at a particular period.

In all, training your donkey over time can help reduce the chances of the donkey braying all the time.

Do Donkeys Bray All Day?

eough donkeys bray for various reasons they do not bray all day. They bray when they feel they need to.

As we have outlined the various reasons why your donkeys might be braying, it is easy for you to study the bray triggers so the donkeys can bray less.

Generally, jennies are less vocal than the males who bray more regularly for various reasons.

Your donkey might also be more vocal especially if you have had reason to spoil him and it might bray if he feels he’s not getting enough attention or treats from you.

The popular hee-haw sound for which do keys are known is called braying and can be used by donkeys for different forms of communication.

As a donkey, recognising the reasons behind your donkeys braying can help you better understand it more and make your relationship more cordial.

If the loud noise gets to you or the neighbors, remember there are ways you can reduce the incidence of your donkey making the sound. 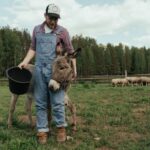 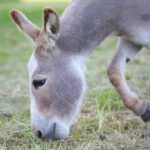