If you observe a flock of ducks at a pond or near any source of water, you might have noticed that they tend to attack each other.

Why do ducks attack each other?

The first time I saw this happen, I was really shocked

How could calm and loving birds, suddenly turn aggressive and attack each other almost to the point of death.

Now before I go on, I want to point out that I am not sensationalizing this behaviour among birds.

Male ducks will unceremoniously attack a female duck and in most cases drown her as a way of mating with her.

During this period, two ducks, mainly a male and a female will bond together and form a couple and this neglects a lot of other males in the flock

So what you notice is that at this time of the year, which is mating season, there are a lot of male ducks that will be without any partners.

As a result of this you will find lots of female ducks, called hens being subject to attacks and violence from the males so they can mate.

The lonely males without any partner will try to seek a female and the only way they can do this is to single out a female from her partner and detach them.

So these lonely males who also need to mate will vie for attention from the female and if her partner cannot fend them off, they will violently attack her.

These attacks can lead to the females being killed as they are battered, killed and if close to water they can be drowned.

Although these attacks start as early as February, they can reach and get far worse later in the season when the hens have laid their eggs and their partners have left them.

At this stage, the female no longer has anyone to defend her and in some cases have been attacked by as much as 20 drakes

But like I said, it is all normal behaviour and the law of nature must take its course

I remember one time I tried to rescue a hen from a flock of drakes.

After tending to her and nursing her back to health, I released her back to the same pond I found her only for the males to go after her again

It is actually a sad sight to watch but then, it’s just the way it is and there is nothing we can do to alter nature.

Do ducks try to drown each other?

This usually happens between male and female ducks

What happens is that when the females have finished mating with her partner and has laid her eggs, the males will leave

While this is happening, the males will attack the hens viciously and sometimes might even try to drown her.

Why do female ducks mount each other?

Another bizarre aggressive behaviour I have noticed among ducks, especially the females is them mounting each other.

There are a few reasons for this behaviour

The first one is a sign of dominance. She wants to mark her territory and also ensure that her partner only has eyes for her.

It is also her way of showing who is on top of the pecking order and has superiority over the other.

Are ducks mean to each other?

Especially when it comes to mating.

Why are my ducks pecking each other?

Overcrowding can result to pecking and cannibalism among your ducks

So what you want to do is to provide adequate space and room for each duck to eat, move about flourish and also take their bath

If you fail to do this might lead to competition among the birds and the more dominant ones will keep the weaker ones from access to feed and water.

The number of hours of light you provide to your birds and the intensity of the light can influence pecking among your birds.

Extreme bright lights or excessively long periods of lights will cause your ducks to become hostile to each other.

If you need something with more power, then I suggest you go for red or infrared bulbs.

If you feed them extremely high energy and low fiber diets then you are sure to have some aggressive birds on your hands.

Feed lacking protein and other nutrients, particularly the amino acid methionine, will also cause birds to pick feathers.

Provide a diet that is balanced appropriately for the age and types of fowl you are raising. Protein requirements change as chicks grow and should be adjusted on the basis of a recommended feeding schedule.

How to stop ducks from fighting

If you rear ducks or you keep them as pets and you notice that they are becoming aggressive, here are some tips to help keep them from fighting each other

Ducks attack each for the reason of dominance and to mark their territory.

They also do it as a result of mating between males and females. 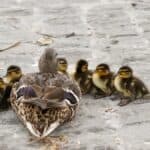